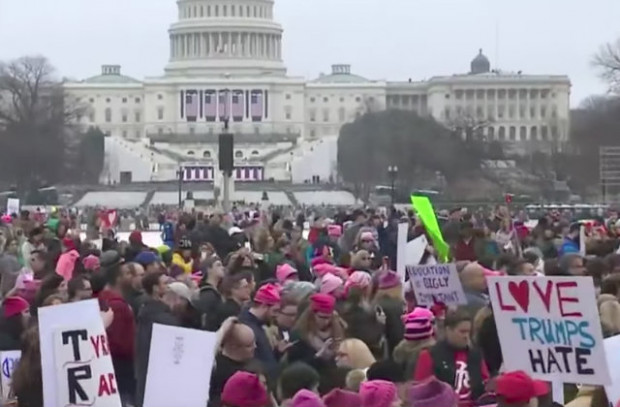 The ACLU-DC is trying to stop three search warrants that’d let the Department of Justice snoop around protesters’ Facebook accounts over Inauguration Day protests. They filed in D.C. Superior Court on Thursday, saying the government’s demands violate the Fourth Amendment because they are so broad, and threatening First Amendment speech. These warrants ask for too much information not directly relevant to the federal probe, argues the ACLU. This includes information on the plaintiffs’ friends, associates, and the approximately 6000 individuals who just “liked” an anti-Donald Trump Facebook page. Requested data would go back to Nov. 1, 2016, a week before the presidential election.

“The warrants make no provision for avoiding or minimizing invasions into personal and associational/expression information, for preventing such information from being shared widely within the government, or for destroying irrelevant material when the investigation is concluded,” said the ACLU filing. In other words, this might chill First Amendment speech by giving the government means to observe anyone who were simply linked to anti-Trump protesters.

This fight stems from arrests made Jan. 20. Demonstrators came to Washington D.C. to protest President Donald Trump‘s inauguration, and over 200 ended up getting charged with felony rioting. In investigating the alleged criminality, the federal government later got three search warrants from the D.C. Superior Court against three Facebook accounts: the disruptj20 page (now known as Resist This) owned by Emmelia Talarico, and personal accounts owned by Lacy MacAuley, and Legba Carrefour. According to the ACLU, these people didn’t initially know about warrants because of a gag order. Facebook fought this gag order, which was later dropped by the government shortly before the D.C. Court of Appeals ruled on it. Talarico, MacAuley, and Carrefour hadn’t even been charged with Inauguration Day-related arrested by the US Attorney, said the ACLU.

The government previously tried to get their hands on the IP addresses of 1.3 million people who visited the DisruptJ20.org website. DreamHost, the hosting provider, was served a search warrant, which they fought in court. The DOJ amended their demand in August to now omitting the digital address of visitors, and unpublished posts hosted on the site. A court took this further, by placing more restrictions on investigators. Officials must explain how information will be reviewed, show how they will abstain from collecting prohibited information, and abstain from sharing and publishing collected information, even with other government agencies. The DOJ is appealing these restrictions. DreamHost, who was ordered to hand over the information under this new court decision, was mulling over whether to appeal as well.