Above Photo: An Oregon nursery owner stands next to a sign pointing to a marijuana grow. (TIM BULLARD/THE DAILY COURIER/AP)

This non-public Department of Justice committee is acting in the shadows with no known input from experts. The few people known involved from DOJ have long histories of opposing marijuana and having views based on ignorance of the substance, including Attorney General Jeff Sessions. As long ago as 1972, the National Commission on Marihuana and Drug Abuse, recommended the federal government decriminalize marijuana and allow non-profit transfers. President Nixon rejected the report’s recommendations and escalated enforcement, even though he had appointed drug war hawk, Governor Raymond Shafer, as the committee’s chair. Finally, 45 years later the country has come to its senses about marijuana and large majorities of people in the United States not only want marijuana decriminalized but legalized. Progress is finally being made, now an extremist former senator from Alabama is the attorney general and he threatens to reverse the progress. Tens of millions have been arrested since the national commission recommended decriminalization, how many millions more will be arrested because of Sessions’ policies which are based on ignorance about marijuana. He has said marijuana is “only slightly less awful” than heroin, “Good people don’t smoke marijuana” and “You can’t have the President of the United States of America talking about marijuana like it is no different than taking a drink… It is different…”  His beliefs on marijuana are literally the opposite of reality and he is out-of-step with the views and experiences of the people of the United States. Sessions is likely to do great damage to many people and communities as well as undermine democratic votes in many states that have legalized marijuana for medical and non-medical use. KZ

Few details have emerged about a potentially influential review.

Led by an outspoken legalization opponent, Jeff Sessions’ Justice Department is reviewing federal marijuana policy, with significant changes possible soon. Almost nothing about the review process is publicly known and key players in the policy debate have not been contacted.

The outcome of the review could devastate a multibillion-dollar industry and countermand the will of voters in eight states if the Obama administration’s permissive stance on non-medical sales is reversed.

What is known: The review is being conducted by a subcommittee of a larger crime-reduction task force that will issue recommendations by July 27. The subcommittee was announced in April alongside other subcommittees reviewing charging and sentencing.

The task force is co-chaired by Steve Cook, an assistant U.S. attorney in Tennessee who like Sessions advocates harsh criminal penalties and a traditional view of drug prohibition. The other co-chair is Robyn Thiemann, a longtime department official who works as a deputy assistant attorney general in the Office of Legal Policy.

After graduating from Yale Law School in 2009, Murray ricocheted between law firms and public-sector jobs. He served less than a year as an assistant U.S. attorney in Virginia in 2013 before clerking for Supreme Court Justice Anthony Kennedy, according to his LinkedIn page. He worked at the Jones Day law firm before joining the Trump Justice Department.

Murray could not be reached for comment and Justice Department spokesman Ian Prior declined to comment on the “deliberative processes within the department“ when asked to discuss Murray’s role.

The department declined to identify other members of the subcommittee, the scope of its policy review or name outside groups that are being consulted.

The lack of information provided and the seemingly secretive nature of the review has proponents of a more lenient marijuana policy concerned.

West says the group is focused on building relationships with members of Congress and points to overwhelming public support for respecting state marijuana laws — 73 percent, according to an April survey by Quinnipiac University.

The Marijuana Policy Project, a large advocacy group that has led many of the successful state legalization campaigns, also says it is not in touch with the subcommittee.

“Without knowing much about the approach the subcommittee is taking, it’s hard to say whether we’d expect them to reach out,” West says. “So far, [Sessions’] comments have not indicated a lot of willingness to work together toward common ground.”

It’s unclear if agencies under the Justice Department’s umbrella, such as the Drug Enforcement Administration, are contributing to the subcommittee.

DEA acting administrator Chuck Rosenberg told U.S. News on Tuesday that he is not personally involved in the review, and that he didn’t know if any of his subordinates are. A DEA spokesman was not immediately able to provide additional information. 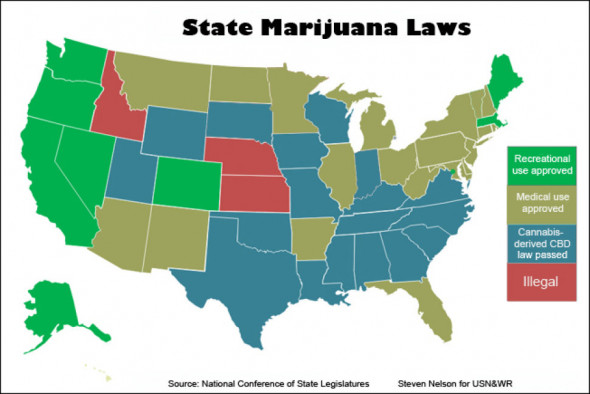 Marijuana possession for any reason outside limited research remains a federal crime. Most state medical programs are protected from federal enforcement by a congressional spending restriction. Recreational programs are protected only by the 2013 Cole Memo that allowed states to regulate sales so long as certain enforcement triggers aren’t tripped, such as diversion to other states, distribution to minors, public health consequences and involvement of criminal groups.

State-legal cannabis businesses hit $6.7 billion in estimated sales last year. Cannabis companies are believed to employ more than 100,000 workers and they collect hundreds of millions of dollars in state and federal taxes.

Listening to diverse points of view on marijuana policy is significant because the effects of regulated sales are debated, and data can be spliced to support a point of view.

For example, multiple federal and state surveys indicate that teen use of marijuana has not increased since 2012, when the states legalized marijuana for adults 21 and older. But use rates have fluctuated for years, so comparing current use to a particularly low-use year further in the past can offer a different impression about trends.

Diversion to other states is also debated. A law enforcement task force called Rocky Mountain HIDTA claimed that intercepts of marijuana mail out of Colorado increased following legalization, sourcing the information to the U.S. Postal Inspection Service. But a USPIS spokesperson told U.S. News state-specific records did not exist. Though state-specific records are not available, national parcel intercepts did increase in 2016 after two years of declines. Two states sued Colorado unsuccessfully claiming spillover.

Mexican drug cartels, meanwhile, have been caught smuggling significantly less marijuana across the southern border. And it’s unclear if local increases in drugged driving arrests and marijuana hospital admissions are primarily the result of legalization policies or improved awareness and reporting.

In April, Colorado Gov. John Hickenlooper said Sessions told him the Cole Memo was “not too far from good policy.” But the attorney general has repeatedly made clear his personal objection to marijuana use and legalization.

In March Sessions scoffed at marijuana’s medical potential and evidence showing legal access associated with less opioid abuse. The prepared copy of a March speech called marijuana use a “life-wrecking dependency” that’s “only slightly less awful” than heroin addiction. In May Sessions said there was “too much legalization talk and not enough prevention talk.” Last year, he famously declared that “good people don’t smoke marijuana.”

President Donald Trump said during the presidential campaign that he does not personally support marijuana legalization, but favors state autonomy. Recent national polls show roughly 60 percent of Americans believe marijuana use should be legal.