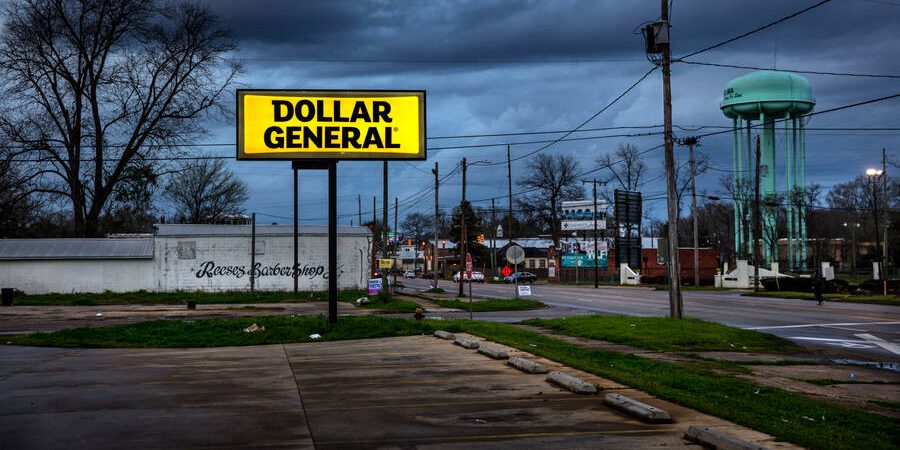 In less than two weeks, a tiny group of a half dozen workers in Barkhamsted, Connecticut will vote on whether to become the only unionized Dollar General store employees in America. These six people in a small town about 20 miles northwest of Hartford now find themselves positioned to gain a historic toehold for organized labor inside a booming, low-wage industry. But it will not be easy.

Few companies have prospered since the beginning of the pandemic as much as Dollar General. The company boasts that three quarters of all Americans now live within five miles of one of its nearly 18,000 stores. The Washington Post reported that foot traffic at those stores has risen by a third in the past two years. Dollar General’s stock price has boomed during the pandemic, and the company is now worth almost $50 billion. It is the king of the dollar store industry, whose growth has far outpaced that of traditional big box stores like Walmart and Target, as the have-nots of the American economy have come to rely on the industry’s cheaper, and more ubiquitous, offerings.

Dollar General employs more than 157,000 people. Last year, the company attracted negative publicity for firing an internal whistleblower who criticized what many saw as the company’s inadequate plans for keeping its workers safe. Last May, a group of Dollar General workers in Maine went viral for walking out and quitting, festooning the store with notes about the company’s low wages and disrespect of employees. Thin staffing, along with low pricing, are at the heart of the company’s business model.

Ironically, the staffers in Barkhamsted who have launched the union drive say they enjoyed the job. “The place is like a family. The people there are family. We all take care of each other,” said a Barkhamsted Dollar General employee who asked to remain anonymous due to fear of retaliation at work.

Asked about the allegations about the district manager’s behavior, Dollar General said in a statement, “As a company, we do not comment on allegations of employee wrongdoing, other than to reiterate our zero tolerance policy for unlawful discrimination and harassment.”

The store’s employees reached out to Local 371 of the United Food and Commercial Workers Union (UFCW), which represents grocery workers, manufacturing workers, and others throughout Connecticut. On September 20 — after only a few days of organizing — the union filed for an election. On October 22, the vote will be held in a tent outside the store.

As soon as the union petition was filed, Dollar General reacted with an intense anti-union campaign. Jessica Petronella, the organizing director at UFCW 371, said that as many as 15 corporate employees have descended on the store to harangue the workers, and that the company has hired an outside anti-union consultant as well. Employees are now being bombarded with arguments against unionizing every single day at work, she said, which creates “tons of fear.”

“They have been harassing us, following us, listening to our conversations, taking us one by one outside to say the union’s bad, and if we do the union we’re going to lose hours,” the Barkhamsted employee said. “It’s stressing everybody out. Everybody’s got anxiety. I’m even going to a therapist over this.”

Not only is Dollar General convening mandatory “captive audience” staff meetings to argue against the union, and cornering workers one-on-one for uncomfortable conversation, but — according to both the employee and Petronella — the company fired one of the store’s workers last weekend. The remaining employees see it as a case of retaliation for the union drive. That incident has made them more determined to speak out, despite the overwhelming pressure that is being brought to bear from above.

“At Dollar General, our open and direct approach to communication affords our employees the opportunity to be heard, connect and thrive. We believe this open communication is a key reason we continue to grow and provide unrivaled opportunities for motivated individuals to start or advance their careers,” the company said in a statement in response to questions about the union drive. “Regardless of the outcome of this petition, we will continue to strive to provide a work environment that is built on trust, respect and opportunity for all employees.”

The Dollar General employee said that the store’s workers would like to see higher pay, better benefits, and an end to being required to work on holidays like Thanksgiving and Christmas for no additional pay. (The company said “Dollar General employees are not required to work on Christmas Day and hourly employees who work on Thanksgiving Day are provided holiday pay.” The employee of the store and the union say that is not the case.) But more than anything, the union drive is an effort simply to protect the job they already love, and to stop what they see as unfair treatment of the workers by the managers above them.

Both Petronella and the Dollar General employee say they are confident that they will win the union vote — the firing of their coworker has only strengthened their resolve, they say. The union has begun reaching out to workers at other Dollar General locations in surrounding counties in Connecticut, letting them know that the union drive is happening, and seeking to drum up interest in unionizing at more stores.

The effort to organize the booming dollar store industry is sure to be every bit as brutal as the (still unsuccessful) effort to bring unions into larger retail operations like Walmart and Amazon. It is a notoriously anti-union industry, willing to go to great lengths to avoid giving workers the power to raise their own wages. Until now, the only Dollar General store to successfully unionize was a single location in Missouri, where workers voted to join the UFCW in December of 2017. After years of legal challenges, that vote was finally certified in February of 2020. Three months later, Dollar General closed the store.

The company did not respond to a question asking if it would commit to not close the Barkhamsted store in the event of a successful union vote.

Despite the challenges, unionizing low-wage retail jobs is a vital task if the American labor movement ever wants to reach the workers who need its help the most. The six Dollar General workers in Connecticut have undertaken a task every bit as meaningful as the workers currently attempting to unionize Starbucks stores in Buffalo — but with far less publicity, and little visible national support.

This union vote can be seen as yet another test of whether America’s rhetoric about valuing front line workers during the pandemic was real in any meaningful way. “It was frustrating. You got people coming in, coughing, no masks. Us with masks on, but we can’t tell them to have a mask. It was hard. But we dealt with it, because that was our job,” the Dollar General employee said of the past 18 months. From the perspective of those doing the jobs, the company’s anti-union backlash feels extremely bitter. “Why are these people trying to fight us? We’re always there. Working for them.”