Above Photo: We Are Cove Point demonstrates weekly in Annapolis to demand a safety study for the export terminal./Photo by John Zangas

The Maryland Public Service Commission will allow higher levels of certain air pollutants from the power plant at Dominion Energy’s Cove Point LNG export terminal. The Commission approved Dominion’s request for a permit amendment, clearing the way for it to begin operations.

Dominion asked the PSC for fugitive emissions of volatile organic compounds (VOCs) at the power plant to be exempted from numeric limits, claiming there was no good way to measure them. The Commission agreed, calling numeric limits “practically unenforceable due to the lack of available technology.”

“Removing the numeric limit will neither alter the operation of the Project nor impact the surrounding environment,” the PSC order says.

The project-wide VOC limit over 12 months was not removed as requested by Dominion but raised from 33.3 to 50.9 tons per year, according to the order. The increase in the VOC limit increases the number of emissions offset credits (ERCs) required for the project to 66 tons. Dominion has already purchased 166 tons of VOC ERCs. Volatile organic compounds–known carcinogens–are precursors of ozone, greenhouse gas emissions and Toxic Air Pollutant emissions.

The Commission requires that Dominion implement a leak monitoring plan called LDAR, which it describes as “one of the most stringent programs in the country.” The company must also produce regular reports showing total monthly fugitive VOC and greenhouse gas emissions under its LDAR program and make them available to the public on request.

The PSC also approved Dominion’s request to use existing turbines as additional sources of backup power for greater “operational flexibility.” 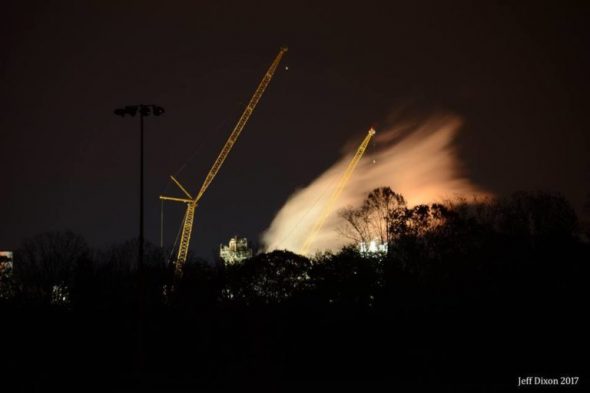 Dominion’s motion to amend its permit came just as the facility is nearing completion. The company failed to include a substantial number of small components–all potential sources of fugitive emissions–in its original submitted plans for the facility’s power plant. Lusby residents, furious at the prospect of more emissions from the plant, pegged the discrepancy as either incompetence or calculated deception on the part of Dominion.

With the permit amendment approval, many people are feeling betrayed by state regulators.

“Once again, those tasked with protecting public health chose to prioritize money over the well-being of communities,” said We Are Cove Point, a coalition group which has fought the export terminal, on its Facebook page. “Politicians and regulators continue to show their true colors by making these sorts of decisions. Don’t accept their empty words when they tell you anything else. … Today, the government of Maryland reaffirmed that they will undermine our communities to support the profits of a private corporation.”

“How can a project that the PSC permitted in 2014 with the disclaimer of ‘no public interest’ suddenly be found to have a public benefit?” said Linda Morin of Calvert Citizens for a Healthy Community. “How can more pollution in our community equal no added health risk to our community? Where is the data? Where is the ‘public service’? Who represents the people? Obviously, no one.” 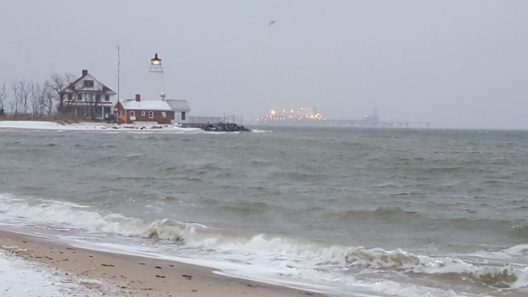 An LNG tanker docks at DCP’s pier near the Cove Point Lighthouse on the Chesapeake Bay in January 2018./Photo by Leslie Garcia

We Are Cove Point has held rallies at the Governor’s mansion in Annapolis for 33 weeks in a row to pressure Gov. Hogan to order a Quantitative Risk Assessment for the export terminal. To date, no comprehensive analysis of the risks has been conducted. A QRA from 2006, when the import terminal was being expanded, showed that 360 homes are at risk of being engulfed by flash fire.

Dominion Energy has announced that construction on Cove Point is complete, and the facility began producing LNG in the commissioning phase last week. Construction cranes, however, still hover above the site. The date for start of operations has repeatedly been pushed back, from October to the end of 2017, and now, to March.

Commissioner Anthony J. O’Donnell voluntarily did not participate in the PSC decision after it was revealed that, according to campaign finance records, he had received political campaign contributions from Dominion Energy’s PAC and had a history of speaking out publicly in favor of DECP’s application with the PSC. He declined to recuse himself.