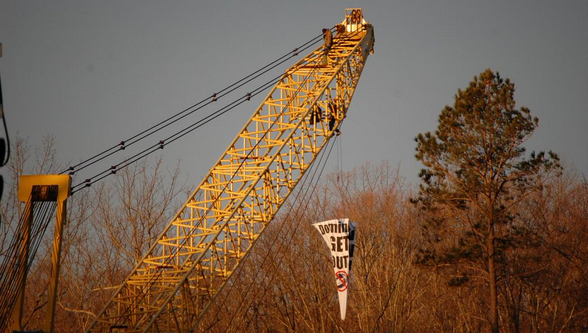 ‘Dominion Get Out. Don’t Frack Maryland. No Gas Exports.’

Early this morning, Maryland teacher Carling Sothoron climbed a 150-foot-tall crane at a construction site in Lusby, Maryland, that is part of the Dominion Cove Point liquefied natural gas export terminal project. She hung a banner reading “Dominion get out. Don’t frack Maryland. No gas exports. Save Cove Point.” Sothoron is part of Stopping Extraction and Exports Destruction (SEED), an umbrella group of mid-Atlantic activists fighting dirty energy projects.  She remains on the crane. Heather Doyle, another SEED activist who stayed at the bottom of the crane to provide assistance to Sothoron, has been detained by law enforcement.

You can donate to help with their legal fees here

”The Dominion Cove Point LNG project is negatively impacting the environment and community in Lusby, MD. We are already seeing that it will directly lead to massive expansion of natural gas drilling and infrastructure throughout the mid-Atlantic region, from the coast to the Appalachian Mountains. I’m taking direct action today because I’m not willing to let the natural gas industry destroy Maryland, my home,” said Sothoron.

Virginia-based Dominion Resources’s $3.8 billion Cove Point LNG export terminal would bring over a billion cubic feet of natural gas a day from Appalachia, liquefy it, and  ship it to Asia. The project was approved by the Federal Energy Regulatory Commission (FERC) in September of last year.

The site at which the crane is located, referred to in FERC documentation of the project as “Offsite Area A,” consists of 179.4 acres of land located on Maryland Route 2/4 about a little more than a mile west of the Cove Point terminal. Made up of 100 acres owned by Dominion and 79.4 acres leased from Calvert County, the site was undeveloped and covered with trees prior to the beginning of construction. Dominion plans to clear more than half of the site to provide space for equipment storage, warehouse space, and parking for 1,700 worker vehicles. Work began immediately after FERC approved the project and a large cleared area is already visible from the road.

Of the four natural gas export terminals approved by federal regulators to date, Dominion’s facility is located closest to the Marcellus Shale, a porous rock formation containing natural gas (methane) that underlies parts of New York, Pennsylvania, Ohio, West Virginia, Virginia, and Maryland. Extracting the gas requires the use of hydraulic fracturing or “fracking.” A recent analysis of peer-reviewed studiesshowed that most have found evidence that fracking causes harm to public health and environmental health.

The recent surge in natural gas production resulting from the widespread use of fracking has led to a glut in the market and a dramatic drop in prices in the last few years. Exporting natural gas would boost its price, stimulating increased drilling and production. In addition to export terminals, this will require hundreds of miles of pipeline and other infrastructure. Despite strong community and local government opposition, Dominion recently completed a compressor station in the small town of Myersville in central Maryland to move natural gas along its interstate pipeline.

Adding urgency to today’s action is the possibility that fracking will start soon in Maryland.  Former governor Martin O’Malley issued an executive moratorium on fracking in 2011, suspending drilling in the state’s portion Marcellus shale pending a series of studies by an advisory commission. However, the commission recently wrapped up its work and the state has proposed regulations for fracking. The new governor, Larry Hogan, who took office January 21, has shown enthusiasm for idea of fracking in Maryland, calling it “an economic gold mine.”

Sothoron will be available for interviews by phone until she is removed from the crane.

Donate to help with their legal fees here