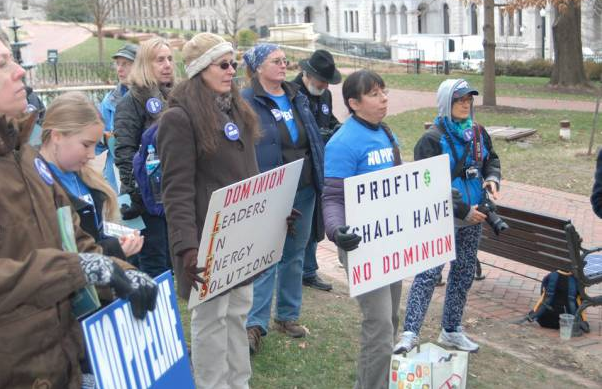 Richmond-based Dominion Resources is partnering with other utilities to build the $5 billion Atlantic Coast Pipeline, which would cross the Blue Ridge Mountains to deliver gas from Pennsylvania, Ohio and West Virginia.

Friday’s rally was organized by the Sierra Club and Friends of Nelson, a group of property owners in Nelson County who live along the proposed pipeline route.

Environmentalists say the project would contribute to global warming because of the extraction method, known as hydraulic fracturing, or “fracking,” used to get the gas out of the ground.

Property owners whose land would be crossed by the pipeline say the utilities are trampling on their property rights.

Joanna Salidis of Nelson County, a landowner in the pipeline’s path, decried what she called Dominion’s “bullying” tactics.

“You can imagine our horror when Dominion came and told us they could cut our trees and drain our wetlands and blast through our rivers,” she said.

The protesters urged support for legislation introduced this week in the General Assembly that would make it more difficult for the project to proceed.

The measure, introduced by Republican state Sen. Emmett Hanger of Augusta County and co-sponsored by Democratic Sen. Creigh Deeds of Bath County, would repeal a 2004 law that allows interstate natural gas companies to do testing and surveying on private property without the consent of the owner.