On January 20, 2017, the world watched—many in horror—as Donald Trump was officially sworn in as the forty-fifth president of the United States of America. The president’s inaugural address, delivered in front of the whitest Inauguration Day audience in decades, bore the distinct mark of a man whose campaign played on the racist, sexist, Islamophobic, homophobic, and transphobic fears of white America. The moment included the President making thinly veiled references to “the civilized world” and “a new national pride.” Still, when confronted with charges of bigotry, Trump and his allies have insisted this revolution will serve all Americans.

“It’s not just the old angry white guys who are fed up with the government,” said Donald Trump Jr., son of the then-Republican frontrunner, just days before the election at an event in Atlanta, Georgia. The comment was prompted by a meeting Trump, Jr., had with a group of black business and religious leaders. The purpose of the meeting: to outline Trump’s plan for urban renewal, ironically named a “New Deal for Black America.”

Trump’s use of the New Deal is emblematic of his campaign and his first week in the White House. When not directly targeting marginalized people, he has often appropriated the language of the left to drum up support for racist, sexist, homophobic, transphobic, and ableist policies. Consider Trump’s various promises to go after “special interests.” For his administration, that means civil rights groups rather than corporate lobbyists. But Trump’s appropriation of the New Deal goes beyond rhetoric, for it embraces the core philosophy at the center of New Deal policy and much of American politics since, namely market orthodoxy.

Using language that conjures images of the apocalypse and intentionally blurs the line between African Americans and urban, Trump describes the last several decades as a disaster for American cities. He reserves particular disapproval for the Dodd-Frank Act. The Act was a centerpiece of the congressional reforms aimed at preventing the kind of speculative practices that led to the 2008 recession—a recession, not coincidentally, which contributed significantly to the president’s real estate fortune. Yet, according to Trump, Dodd-Frank has been more of a hindrance than a help to urban Americans, including denying African American business owners the credit they need.

In response to this new “urban crisis,” Trump has promised tax breaks for business to attract investment into America’s cities and “a 21stcentury Glass Steagall” to assist African American businesses. The irony is that while Trump claims to be offering black America a “New Deal,” many of the policies he proposes rely on the same kind of market logic that has shaped urban policy in the United States for decades. In this sense, Trump’s “New Deal” is not new at all.

America’s love affair with the market is perhaps as old as the country itself. The 1929 stock market crash, however, posed what many consider the greatest threat to American capitalism and compelled policymakers to confront the challenge of addressing widespread poverty and unemployment on a national scale. While offering direct aid in the form of food stamps and some protections for labor, the New Deal relied heavily on a series of tools to incentivize investment and jump-start the economy. For example, the Federal Housing Administration—a creation of the New Deal—offered insurance to lenders to issue mortgages in certain “low-risk” areas, thus facilitating home ownership for millions of white Americans. 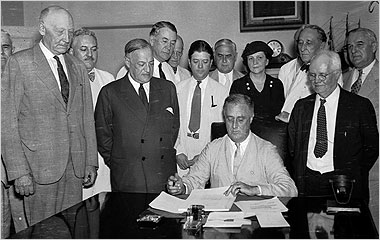 During the 1960s, Americans witnessed the rise of a race-based version of this market orthodoxy with the arrival of the War on Poverty. Often remembered for his championing of anti-poverty programs and civil rights, Johnson called for a decrease in federal spending and massive tax breaks for industry “to create new jobs and new markets in every area of [the country].” His urban initiatives included incentives to facilitate business involvement in the provision of social services. These included the National Alliance for Business (NAB) JOBS program, which used taxpayer money to subsidize the extra costs associated with hiring a person from the “hard-core” unemployed.1

Then came Nixon’s Black Capitalism. Not unlike Trump’s plan to encourage small-business creation through government-subsidized micro-loans, Nixon appealed to African Americans’ desire for economic power in addition to the franchise. Here, Nixon pointed to the Rev. Leon H. Sullivan’s black empowerment programs, which provided a model for the president’s Philadelphia Plan, as an example for the nation. Launched in 1964, Sullivan’s Opportunities Industrialization Centers (OIC) encouraged participants to reject what the organization’s founder derided as “unconscionable” government handouts and adopt proper behavior, including a strong work ethic and an entrepreneurial ethos, necessary to keep them out of jail and make them into “productive citizens.”2 Positioned as a hero by both Democrats and Republicans—someone who had risen from a childhood of rural poverty to become a revered pastor and businessman on the basis of his perseverance—Sullivan became a spokesperson for a certain kind of black politics that had long celebrated entrepreneurism as the central component in the history of America’s success. Carrying the torch previously held by black entrepreneurs like Booker T. Washington and Marcus Garvey, Leon Sullivan spread his black empowerment program. By the mid-seventies, OIC chapters existed in over seventy cities across the United States and Africa. 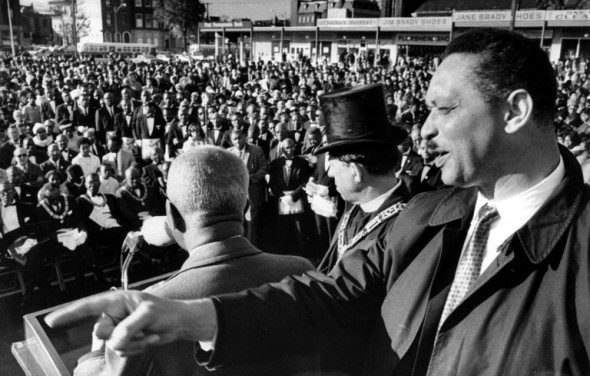 In the end, the market reforms pursued by multiple administrations have done little to stem the decline of good-paying jobs for urban Americans. More importantly, many of the initiatives that have replaced government-funded social welfare with market-based anti-poverty programs alongside heightened policing have only served to further marginalize poor and working-class communities of color. In this regard, Trump’s appeals for increased funding for law enforcement and programs that encourage welfare recipients to convert poverty assistance into micro-loans to start small businesses—two components of his “New Deal”—offer little in terms of new policy solutions.

The coming years will require continued action on our part, as scholars and concerned citizens. As we expand our search for effective strategies to confront the attack on various marginalized peoples and the communities they live in, however, we must resist the urge to portray Trump as an anomaly of American politics. Although Trump’s election represents a return of a particular kind of racist and sexist demagoguery, his platform is an extension of the raw deal long offered black America.