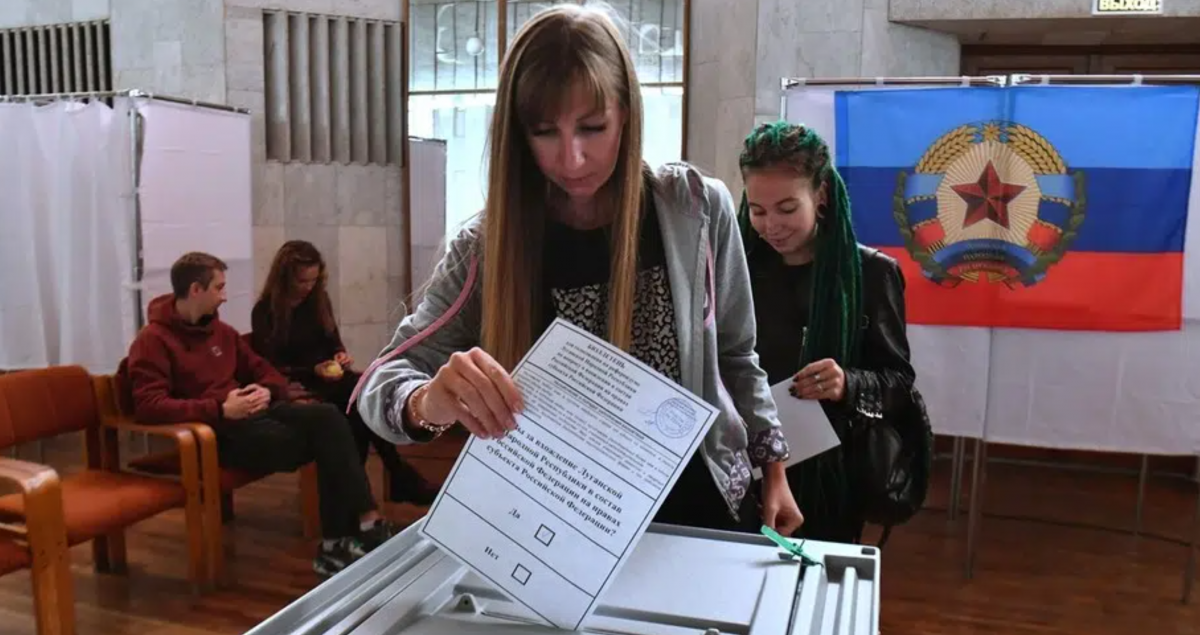 Donbass Residents Explain Why They Voted To Join Russia

Above photo: A girl votes in a referendum on the accession of the Luhansk People’s Republic to Russia at a polling station. Sputnik/Evgeny Biyatov.

‘I Can’t Imagine Our Future Differently.’

Last week, referendums on once-again becoming part of Russia were held in the Donetsk (DPR) and Lugansk (LPR) People’s Republics, as well as in the liberated territories of Zaporozhye, Kherson, and Nikolaev regions (the latter was annexed to Kherson Region).

According to the results, the ‘For’ option won all four by an overwhelming margin. RT’s correspondent in Donbass, Vladislav Ugolny, has been observing the sentiment there for the past eight years. He describes how the referendums took place, what they meant to local residents, and why their outcome simply could not have been different.

For those who are sufficiently immersed in the history of the struggle of the Russian residents of Ukraine for unity with their historic homeland, the results of the referendums are hardly surprising. But it is also worth pointing out from the start that not everyone in these regions took part in the vote.

In 2020, one soldier told his comrades-in-arms that he was only serving in the DPR army for the sake of a good salary by local standards. He said that, at the time, he was ready to dig trenches and go on guard duty. But in case of a resumption of active military operations, he would be at Yuzhny, a station from which buses are dispatched to Russia.

Active hostilities resumed over six months ago, eventually leading to the second referendum in Donbass. And this warrior did not take part in it.

Why? Did keep his word and escape? No, he died in 2021. He could have said anything – soldiers like to scratch their tongues. But when his comrades-in-arms came under Ukrainian fire and their wounded had to be evacuated, he volunteered. During the rescue operation, he was killed in action. He did not live to see the fighting intensify, nor did he live to see the new referendum.

There are many such people who are unhappy with what has been happening in Donbass these past eight years – where they have slowly languished as geopolitical hostages – and are also prepared to die for their land and identity. It is thanks to them and their resilience that Russia’s military offensive was possible. And these referendums also took place because of them.

They all had a lot of reasons to hate what was happening. The wounded were often dismissed retroactively to avoid paying for their injuries. And in a betrayal of memory, the names of children killed by Ukrainians in Sloviansk and Konstantinovka, towns not controlled by the DPR, disappeared from the Alley of Angels (a monument honoring the children of Donbass killed by Ukrainians). By removing these names, it was as if DPR officials were abandoning the territories and the memory of those who remained under Kiev’s occupation.

In the early years of its independence, the LPR had constant political crises, from which the despised Igor Plotnitsky emerged as the victor. Until he was overthrown and the much more popular Leonid Pasechnik was elected.

The hope for reunification was based on the fact that Russia is a stable state governed by the rule of law, with fully-fledged institutions and an established civil society. Living their lives on the frontline of a geopolitical confrontation, Russians in Donbass dreamed that one day war would disappear.

They hoped that Donbass would become an ordinary, peaceful region of Russia, like neighboring Rostov. They hoped that they would be able to put away their weapons and return to the mines and factories, and they could teach their children without regular shelling. Or that they could sweep the streets for leaves instead of scrubbing away blood from the pavement. Joining Russia offered hope and was synonymous with victory. After all, this is why the struggle started.

Fate decided otherwise and the referendums had to be held during the fighting, with the risk of Kiev shelling the polling stations. Thus, the votes themselves did not become a moment of triumph and victory. But they could no longer be delayed, given that one of the declared aims of Moscow’s military operation was to restore peace to Donbass.

The only way to protect both Donbass and the regions of Kherson and Zaporozhye from the threat of genocide by the Ukrainian state was to incorporate them into the Russian Federation. The sweeps in Kharkov Region after towns and villages were seized by Kiev earlier this month, and the convoys of refugees, were apparently the final straw.

The risk of polling stations being shelled was one reason some locals criticized the referendums. A friend of mine who is now serving in one of the DPR’s army units refused to participate in the referendum. He justified it by saying he had expressed his position a long time ago and was now defending it with a gun in his hand. He also questioned why the entry of the republics into Russia could not have simply been done by a decree of the Russian government. Why, he asks, do they ask a question to which the answer is already obvious?

Needless to say, this warrior is not a big fan of democracy.

However, his view was marginal. Residents of Donbass, despite the risks of terrorist attacks, flocked to the polls. Since the issue was a foregone conclusion, the polling stations became a place for declaring one’s position.

Journalists were told not about the choice people made, but rather about how long they had waited for the opportunity to make it.

The procedures of the referendum were designed with the usual legal provisions in mind, but the voters themselves effectively abolished the concept of ‘secret ballot’ by ticking the ‘yes’ box publicly.

“The people of Donbass needed the referendum not to reassert their choice, which was made back in 2014 and has not changed since, but to present it to the international community in a more or less accepted framework,” a graduate of the political science department at Donetsk National University said after the vote. A leg injury prevented her from going to the polling station, but she was able to vote Yes by door-to-door voting. “As I stood at the mobile ballot box in my backyard in the rain, listening to the sound of explosions in a neighboring district, I felt joy. Because it is, in any case, a step forward after too much stagnation,” she said.

Dmitry, a native of the border town of Yenakievo, Donbass, said, “Of course I waited for the referendum and voted Yes. I cannot imagine our future any other way. Back in 2015, I was repeatedly offered the chance to leave my home region and live in Ukraine so that I would not know what war is like.

As you can see, I refused. Voting in the referendum was not my biggest contribution, but I was glad I did it. I didn’t doubt it for a second, especially when, about 40 minutes later, a HIMARS missile was shot down over the polling station, with shrapnel hitting my neighborhood.”

This is how the referendum was held in Donbass. As for the Zaporozhye and Kherson regions, the votes there were less festive there due to greater infiltration by Ukrainian security services and a bigger risk of sabotage. The lack of an eight-year wait was also a factor. However, even there, people were hoping that the Kharkov tragedy would not be repeated in their areas.

The referendums that have taken place are like a marriage proposal made after eight years of engagement. There may be reason to speculate why it was not done earlier, but the answer is obvious.