Workers at an Amazon warehouse in Bessemer, Alabama have been voting on joining RWDSU for the last month. If they are successful, they would be the first Amazon employees in the United States to join a union.

Their campaign has garnered support from across the country. UCOMM previously reported on Teamsters driving from Boston to support the effort. The NFLPA has released a video supporting the organizing effort, actor Danny Glover came down to Bessemer to meet with the workers, and even President Joe Biden has weighed in. Josh Brewer, the lead organizer on the campaign, told the Prospect that many people in the community are extremely supportive of the organizing effort.

“Everyone in the community is cheering us on. It’s been that way since we got here. We’ve had local people bring food and chocolate and coffee to the organizers. When I look at the notes that organizers send me, they tell me that workers are telling them, ‘It’s my grandfather I’m hearing from. It’s my uncle. It’s my neighbors. They’re saying to us, ‘You better sign the union card. It’s the way you assure your future and make sure Amazon pays you well.’”

At the same time, workers at the warehouse have faced an unrelenting anti-union campaign. They have received numerous anti-union texts a day and they can’t even go to the bathroom without seeing Amazon’s anti-union propaganda. Amazon is even working with local officials to change the time that lights outside the warehouse stay red so that organizers can’t speak to the workers while they wait at red lights.

To support Amazon workers and let the company know that we do not approve of their union-busting tactics, a one-week boycott of the company has been planned. From Sunday, March 7th to Saturday, March 13th, everyone is being asked to not use Amazon or Amazon Prime and do not stream videos using the Amazon Prime video service. 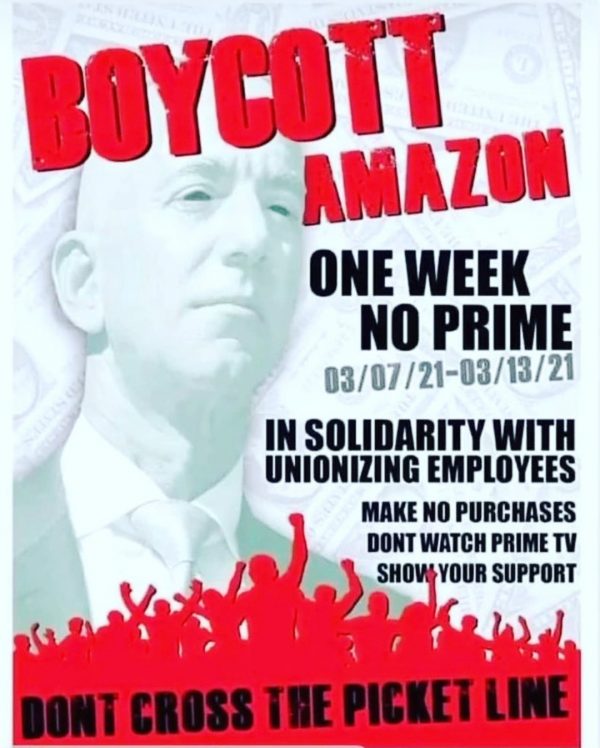 For this to work it needs to be big, so share out the image above and use the hashtag #boycottamazon to let the company know that union members will not stand for this type of behavior.

We at UCOMM are Amazon consumers too, and we know what a challenge this may be. Coming to America 2 is being released that week and our daily routines depend on us asking Alexa questions all damn day. For one week, unplug your echo dots, stay off Amazon Shopping and watch Netflix instead of Prime. The ask really isn’t that big of an ask if you look at the bigger picture.