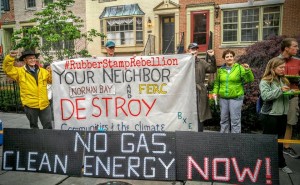 Holding decision makers personally accountable for their actions is not an extreme tactic. It has been used by many movements and is often very effective. When people in their community know that a resident is responsible for destroying communities, communicide, in order to push more dirty energy infrastructure they understand more clearly the impacts of their actions.

Science is saying we need to stop building carbon and methane energy infrastructure or climate change will get worse and adversely impact all of our lives. Nonviolent protests outside the homes of people responsible for such decisions is essential. And, when they try to divide the movement by criticizing this type of tactic it is important for groups to stand together in solidarity.

The Environmental Defense Fund, no doubt caught off-guard and unaware, failed in this instance. They fell into the trap and aided the ‘divide and conquer’ tactic of those in power. We hope in the future they and other big green environmental groups recognize they should applaud holding people accountable for the crimes against the planet.

BARRASSO GETS TOUGH ON (GREEN) EXTREMISTS: During the Senate Energy and Natural Resources Committee’s Tuesday hearing on oil and gas pipelines, Senate Republican Policy Committee Chair John Barrasso pressed Jonathan Peress, air policy director at the Environmental Defense Fund, to condemn the work of Beyond Extreme Energy – a smaller green group that has protested this year at FERC commissioners’ homes because of the agency’s approval of fossil-fuel infrastructure.

Peress, visibly uncomfortable at being asked to answer for a green group that EDF has had little association with aside from at least one sign-on letter with many other environmental outfits, said the personal-attack strategy was “highly unfortunate.”

“Then why hasn’t the environmental community stood up to denounce these tactics?” asked Barrasso. “Is it waiting until a public official, a FERC confirmed individual or his family or her family – until they get hurt?”

Beyond Extreme Energy is not an extremist group. The extremists are those who are destroying the planet, not those who are protecting it. BXE acted appropriately using a time-honored nonviolent direct action tactic to hold a public official accountable. You can see the exchange in this video: