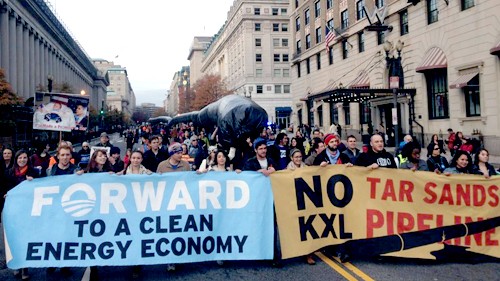 Don’t Look To US Government To Solve Climate Crisis

This is the third part of a series being co-produced by Popular Resistance and Occupy.com, focusing on the upcoming climate protests this month at the United Nations in New York. Read the first installment here and the second installment here.

This year, 14 federal agencies in the United States released a collaborative report called the National Climate Assessment which outlines the impacts that the climate crisis is having and what we can expect in the future. Woefully lacking from the report were real solutions to the climate crisis. When we questioned the media team promoting the report, they said the report was informational and that it was up to civil society groups to demand solutions.

How is it that numerous federal agencies can publish an excellent report on the scope of the problems and yet fail to act? It’s likely due to the fact that the United States is an oligarchy (ruled by a few) rather than a democracy (which translates as “people-power”). Academic studies released this year show that policy decisions consistently reflect the desires and needs of the wealthy rather than the majority of the public.

In our previous article, we described how the U.S. has undermined the United Nations Conference of Party (COP) meetings to force a pro-industry agenda, even going so far as spying on countries and negotiating in secret. The same activities are occurring at home to stop attempts to end the current extraction-based energy economy and move into a low-carbon, renewables-based one.

Now, the climate crisis is here and we must take serious action to mitigate it and build systems that allow us to adapt to its effects on our life systems. Solutions exist to accomplish this, but they won’t be coming from above. Rather, they will come from a mobilized grassroots demanding transformation to a carbon-free, nuclear-free energy economy.

This month, when the United Nations holds climate meetings in New York, people in the U.S. have an opportunity to gather, raise awareness about the roots of the crisis, and build a broader “movement of movements” that cooperates through a unified strategy. We must be clear in our demands and goals and lay a foundation to build a sustainable energy economy that provides universal access to basic necessities from the bottom up.

In the U.S., the 2014 National Climate Assessment, which reports on the current and expected impacts of climate change, finds that some areas, particularly in the West, are using water at unsustainable levels. It predicts increased competition for water and a reduction in water quality. By 2050, 32% of counties will experience high or extreme risk of water shortages. While some areas of the U.S. will experience droughts and shortages, other areas, particularly in the East, will face increased rainfall, risk of flooding and damage to necessary infrastructure.

The report shows that ecosystems are already being disrupted, causing changes in migration patterns and the extinction of species. Changes in temperature and seasons are affecting plant life by altering their growing seasons, geographical distribution, the prevalence of wildfires and exposure to pests and diseases. The National Climate Assessment reports that “many iconic species may disappear from regions where they have been prevalent or become extinct, altering some regions so much that their mix of plant and animal life will become almost unrecognizable.”

Overall, the 2014 Intergovernmental Panel on Climate Change (IPCC) and the U.S. reports list a number of impacts that need to be considered. These include disrupted livelihoods, health effects, injuries and death where there is inland flooding; a rise in sea level or extreme heat; a breakdown in necessary infrastructure for electricity, water or emergency services due to extreme weather events; lack of access to water and a breakdown in the food system; and risks of economic impacts from loss of ecosystems such as freshwater and marine life. You can review the IPCC report here and the National Climate Assessment here.

The U.S. is Headed Down the Wrong Path

Despite evidence that the U.S. can move rapidly to a carbon-free, nuclear-free energy economy, the opposite is happening. While President Obama has been adept at using the language that most people want to hear when it comes to the climate crisis, his actions have gone the other way. His administration has a close relationship with the fossil fuel and nuclear industries, so an “all of the above” energy strategy that includes fracking for oil and gas, offshore oil drilling, building pipelines, allowing oil trains to move oil and gas, mountaintop coal removal, and nuclear energy is being promoted. Corporations are even moving to mine tar sands in the United States.

The U.S. has meanwhile become a great source for fossil fuel consumption in China and the European Union. Bloomberg News reports that the U.S. is “the world’s biggest oil producer this year after overtaking Saudi Arabia and Russia,” primarily due to fracking in North Dakota and Texas. Although the U.S. oil and gas boom was initially portrayed as a mechanism for creating energy independence, new infrastructure is being put in place to export that oil and gas. Characteristic of markets, as the price of methane gas fell in the U.S., corporations looked to export it to places where they could find a higher price.

Although sustainable sources of energy are being developed in the U.S., according to Sean Sweeney of Trade Unions for Energy Democracy, renewables are not rising fast enough and are merely supplementing the use of fossil fuels which continues to rise. The Nuclear Information and Resource Service reports that Obama’s new EPA rules are incorporating nuclear energy as a core element even though nuclear is expensive, unnecessary and problematic throughout its lifespan – from the excavation of uranium to the production of radioactive long-term waste.

But Big Energy’s influence over every level of the political system in the U.S. is obvious. There are two oil and gas industry lobbyists for each member of Congress. In turn, many industry lobbyists have an inside advantage being former members of Congress themselves, or their staffers. Across the country, Big Energy pressures state and local governments for permits and policies that allow more extraction of fossil fuels and uranium and less regulation of their activities.

Big Energy and other corporate entities that profit from fossil and nuclear fuels also influence NGOs – including even those considered to be environmental groups. The Non-profit Industrial Complex helps maintain the status quo by promoting a political party or industry agenda under the guise of environmentalism. We wrote about this previously in more depth in Gang Green versus Fresh Greens.

This doublespeak was evident when President Obama announced new, inadequate EPA rules on coal this summer. Ken Ward reports that within a day of Obama’s announcement, the country’s top 15 environmental groups endorsed it rather than called it what it is: too little, too late. Some of the most offending players are involved in the Climate Action Plan, a group of corporations that includes Dow Chemical, Duke Energy, Exelon, Shell and others that have joined with the Environmental Defense Fund, Natural Resources Defense Council and Nature Conservancy to promote an unjust climate energy policy. The role of these environmental groups has become clear: to give government policies legitimacy while the polluters continue to pollute and profiteer.

Corporations working to profit from the climate crisis do all kinds of things to advance their agenda, including using language that sounds like a call for climate justice when it’s anything but. For example, this month the People’s Climate March, which is being organized prior to the UN meetings on climate change in New York City, is being promoted by a broad set of organizations including the Climate Group, composed of Duke Energy, Goldman Sachs and a long list of multinational corporations that pursue market-based approaches to profit from the climate crisis.

As most of us know, collusion between Big Energy and the U.S. government runs deep, including spying on U.S. citizens and infiltrating activist groups. Private corporations have gone so far as to team up with the Department of Homeland Security to label citizens as “eco-terrorists” for trying to halt fracking, the construction of oil and gas pipelines on their lands, or coal stripmining.

To counter this corporate influence, the climate justice movement must be clear in what it stands for. Anne Petermann describes the People’s Climate March as “A big tent, as in, the circus is coming to town… But this tent is so big that it even includes organizations that support fracking and the tar sands gigaproject…. According to some of the organizers, as long as everyone agrees that climate action is needed, then it’s all good. But are all climate actions created equal? No.”

There are organizations, however, that are organizing around climate justice and real solutions. One of them, the Climate Convergence is a two-day conference to discuss the roots of the crisis, obstacles to change and how to build a larger, more connected and effective movement of movements. The Climate Justice Alliance is participating in the Convergence and is organizing additional activities and direct action.

Similar to Climate Justice Action which developed as an international movement to resist the COP process, climate justice organizations in the U.S. need to recognize – and vocalize – that all of our issues are related to the climate crisis, and to build a similar movement of movements. It should be self-evident that the climate crisis which impacts the planet in so many ways affects us all. The September events in New York provide a platform on which to build.

Stay tuned for the next article in this series, running in the lead-up to the UN Climate Summit and the activities occurring around that event in New York City. The series is being co-produced by Popular Resistance and Occupy.com. Read the first article here and the second article here.

Margaret Flowers and Kevin Zeese are organizers with Popular Resistance, which provides daily movement news and resources. Sign up for their daily newsletter and follow them on Twitter @PopResistance.