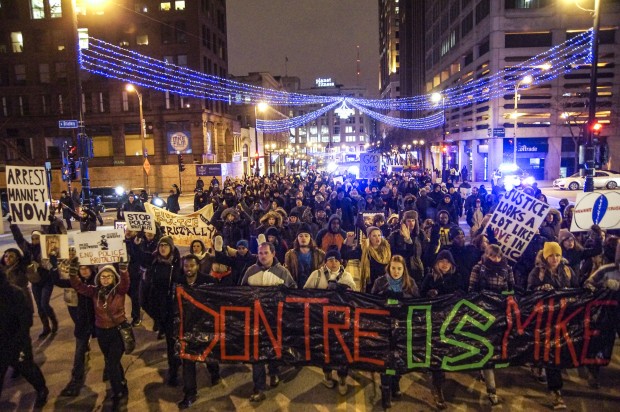 #DontreDay March On One Year Anniversary Of Killing

One Year Later, Dontre Hamilton Lives. Hamilton Family Calls for City-wide #DONTREDAY on the One Year Anniversary of Their Loved One’s Death at the Hands of Police.

One Year Later, Milwaukee remembers Dontre Hamilton who was shot 14 times for sleeping in public park.

Milwaukee, WI April 30th, 2015 — — “They wanted us to go away. They wanted us to stop. They wanted us to be satisfied. But we are not, and we wont be until Black life is valued and respected in our city,” says Nate Hamilton, brother of Dontre Hamilton. TODAY,  April 30th, at3:00PM, the Coalition For Justice and Hamilton Family will march from 2727 W. Foundulac Ave to Red Arrow Park, marching to Ground Zero with the community that has supported them for the past year. The march will arrive at Red Arrow Park at 5:30PM for the memorial celebration. Today the family and Coalition for justice are declaring a city-wide day of remembrance in Dontre’s name, #DontreDay.

Co-Founder of The Coalition For Justice, Curtis Sails, says, “We wont be satisfied until the stigmas around mental health, and homelessness are lifted from the veils or our city officials and community members. We wont be satisfied until justice is synonymous with Milwaukee, and we have shaped this city to be a place where equality and equity are the way of life, not a unique experience for a select group of people.”

Facebook Event and Agenda For The Evening: One Year Anniversary, Red Arrow Park

On May 9, join the Hamilton family for the Million Moms March. Click here for more information.