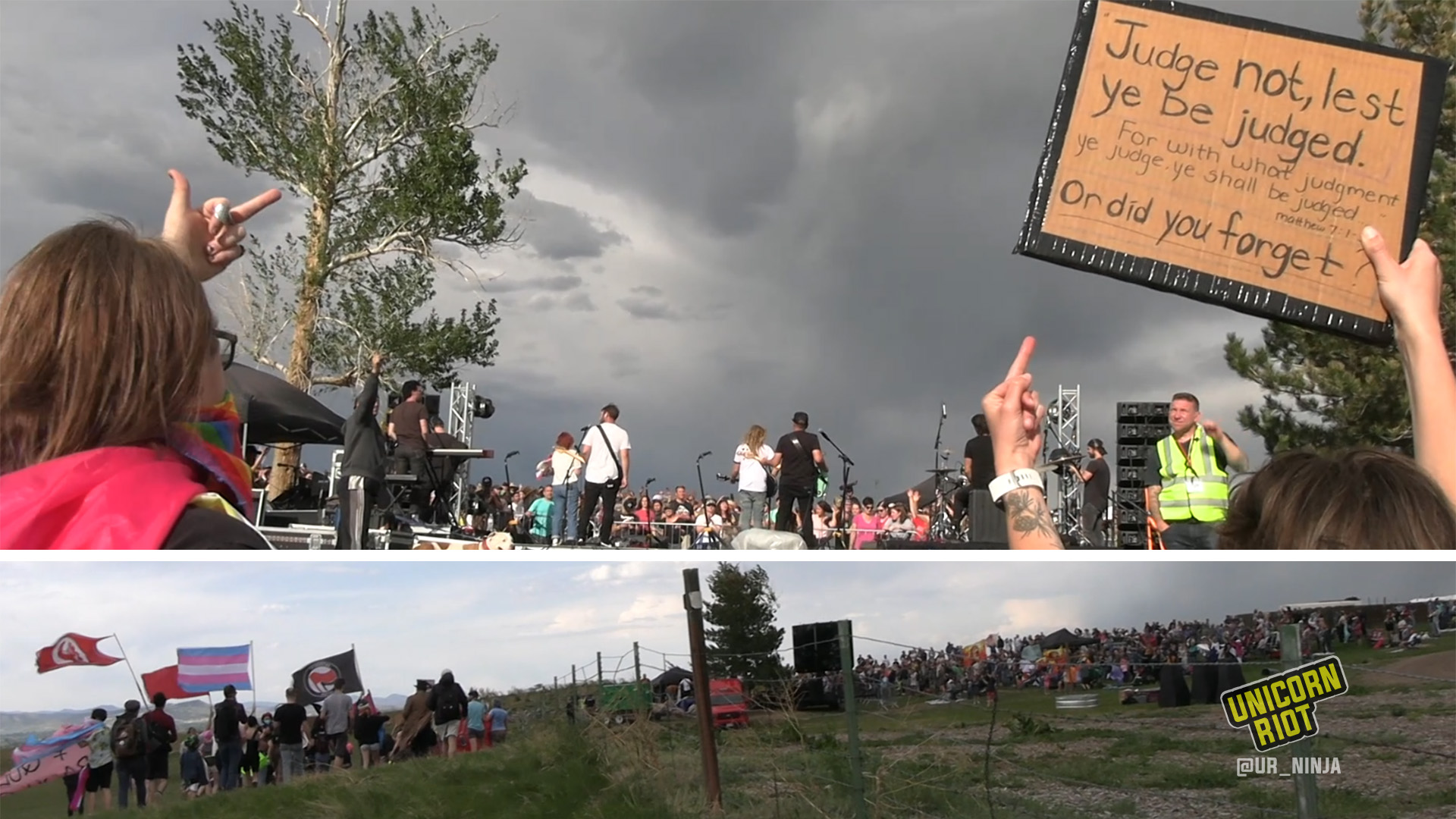 And its Spreading of Extremism.

Boulder, Colorado – On June 4, 2022, an evangelical event series called Let Us Worship kicked off their summer tour in the plains of Northern Colorado along the Rocky Mountains’ Front Range. As their worshiping began outside of Vinelife Church, dozens of protesters marched along the west side of a barbed wire fence separating the church’s property from public land. They got as close to the stage as possible where Sean Feucht, the organization’s founder, was performing music and stirring up his audience, to disrupt the event and the organization’s agenda of spreading Christian Nationalist ideologies.

For two hours, the queer, antifascist, and pro-abortion activists used silly string, pots and pans, bucket drums, whistles, megaphones, chants, banners and signs, and a sound system. While much of the crowd of over 300 people focused on Feucht’s singing, some attendees walked toward the barbed wire fence to attempt to speak to the protesters, with a few praying for them.

Who Is Sean Feucht?

Sean Feucht founded Let Us Worship (LUW) in 2020 when shutdowns swept across the United States, leading to thousands of businesses closing their doors to slow the spread of COVID-19. Feucht explained during a Facebook live video conversation that his “tagline was ‘the church has left the building’ and literally, I mean, we couldn’t go in our buildings, you know, ’cause of all these tyrannical, psychotic, you know, regulations.”

In spring 2020, Feucht ran unsuccessfully as a Republican in California’s 3rd Congressional District. After losing, he founded another organization called Hold the Line to “continue that movement,” according to its website. On top of those two, Feucht founded three other organizations—Burn 24-7, Light a Candle, and Camp Elah—all under the umbrella of Sean Feucht Ministries Inc.

Prior to his solo business ventures, he was a worship leader at Bethel Church, a megachurch in Redding, CA. He was also a signed musician to their self-titled record label.

Occasionally during the Boulder event, Feucht subtly referred to the protesters when speaking to his audience. After finishing one of his songs, he mentioned how “worship has a way of breaking through, [and] if you don’t quit, you win.” He then said how the LUW’s “been to 170 cities, we ain’t quit yet. We’ve encountered Portland, Seattle, Chicago, Los Angeles, New York, we can deal with Boulder, trust me!”

At one point, Feucht announced that “this is a shame-free zone, this is a condemnation-free zone,” and the protesters responded by chanting “liar!”

Although while on stage Feucht chose his words carefully by not mentioning anything explicitly bigoted, on social media he doesn’t hold back. He perpetuates many far-right conspiracies and ideologies such as how people who oppose “Don’t Say Gay” bills and who are proponents of “Woke Schooling” are “groomers, perverts, and predators.”

“But this Christianity is something more than the orthodox Christianity of ancient creeds; it is more of an ethnic Christian-ism. In its most extreme form it legitimizes the type of violence we saw on Jan. 6 and the recent flood of voting restrictions.”

Christian Nationalism also propagates and legitimizes the hoard of abortion restrictions being introduced and passed by state legislatures, the potential for the U.S. Supreme Court to overturn Roe v. Wade and Planned Parenthood v. Casey, and the anti-transgender, anti-gay, and anti-Critical Race Theory bills.

When Florida’s “Parental Rights in Education” bill, also known as the “Don’t Say Gay” bill, was signed into law, Feucht launched a campaign to defund Disney because after remaining silent on the issue, its CEO was pressured by employees to release a statement in opposition to the new law. Feucht told The Christian Post, “We cannot allow our children to be sexualized. We cannot allow perverts to indoctrinate them starting at 4 years old in kindergarten with transgenderism and all the crazy stuff that’s coming from the Left. It’s time for us to rise up and hold the line.”

The law prohibits educators in public school districts from teaching about sexual orientation or gender identity in kindergarten through the third grade. Although those topics are not currently in the curriculum for that age group, opponents to the law fear it could manifest in further stigmatizing and alienating students.

The ACLU of Florida published a statement the same day Florida Governor Desantis signed the bill into law:

“This law stigmatizes LGBTQ+ people, isolates LGBTQ+ kids, and makes teachers fearful of providing a welcoming and inclusive classroom. It will have a real and devastating impact on LGBTQ+ youth, who already experience higher rates of bullying and suicide.”

During a Florida State Senate hearing on February 8, Senator Dennis Baxley (R-D3), who sponsored the bill in the Senate, confirmed that the bill aims to prevent any mention at all of homosexuality, even in a math problem containing family dynamics such as “Sally has two moms or Johnny has two dads,” as Senator Travis Hutson (R-D7) put it.

During Feucht’s breakout session, which you can watch here, he talked about how he had a court case stemming from a LUW event in Tempe, AZ. He explained how “it was really funny” because the police report described “how amazing” the event was.

“We invited them on stage and we did this whole thing where we just honored and blessed the police, we’re laying hands on them, we prayed over the police department. And it was the city council that like was trying to use the police report against us and then the judge was like, ‘Well, it looks like it was a pretty good event,’ and then the council was like, ‘Yeah, but they didn’t have a permit, and they, you know, it was loud.’”

Feucht’s Christian Nationalist beliefs were also highlighted in a hostile tweet he published while in Portland, OR for a LUW event in August 2021, saying if anyone messed with his security team or his event’s right to worship, they would “meet Jesus one way or another.”

On Feucht’s Hold the Line website under the “Issues” tab, a short explanation is offered as to why people should reject Critical Race Theory, calling it a “trojan horse for society and the church.”

“We must treat all of our fellow brothers and sisters with the dignity and respect that comes from knowing that we are fearfully and wonderfully made in the image of God. Many well-meaning people will accept Critical Race Theory outright as a way to combat racism, but CRT furthers racism, and most importantly, it is antithetical to the Gospel.”

Critical Race Theory (CRT) stems from law scholars in the 1970s becoming openly critical of the idea that the law was just, fair, and neutral. The group of scholars were predominantly white and focused on class inequities, calling their movement Critical Legal Studies (CLS). In the 1980s, Harvard University Professor Derrick Bell, along with students and law scholars of varying races, organized seminars about what they termed CRT.

In his book Faces At The Bottom Of The Well: The Permanence Of Racism, Bell writes: “Education leads to enlightenment. Enlightenment opens the way to empathy. Empathy foreshadows reform.”

The Manhattan Institute (MI), a conservative think tank “whose mission is to develop and disseminate new ideas that foster greater economic choice and individual responsibility,” published a lengthy guide for parents who are concerned about CRT, or “critical pedagogy” as the think tank prefers to call it, in their children’s schools.

Within Woke Schooling: A Toolkit for Concerned Parents, the MI describes how they believe critical pedagogy forces students in schools to be reminded constantly that the U.S. is a racist, white supremacist nation “in whose crimes they are daily complicit.”

Under the “Fighting Back” headline, the MI assures the parents reading their guide that if they are feeling uncomfortable, they are not alone, “Parents across the country are increasingly worried about the extremism spreading in their children’s schools.”

However according to the MI’s senior fellow and director of the initiative on CRT, Christopher F. Rufo, the goal of his campaign against CRT has been to drive up “negative perceptions” and “turn it toxic.”

According to Columbia Law Professor Kimberlé Crenshaw, who teaches CRT and also coined the term intersectionality, the purpose of CRT is “to pay attention to what has happened in this country and how what has happened is continuing to create differential outcomes, so that we can become the democratic republic we say we are.”

Crenshaw told Columbia News that the rhetoric being used against CRT is nothing new: “The idea that anti-racism is racism against white people has got to be the oldest talking point in their playbook. There is not a thing happening today that we have not seen before.”

As the protesters began to leave toward the end of the event, Feucht began chanting “Joy!” and his audience followed suit. He turned back to face the protesters and waved at them as he repeated the chant over and over.

In addition to spreading Christian extremism through his events and speaking engagements, Feucht also promotes and sells his music, books, podcast, and other merchandise on his organizations’ websites and social media. On his self-titled website’s “Merch” section, which showcases young girls wearing his paraphernalia as the first large image you see, his followers can purchase any of his over 20 CD’s, his multiple books, and a wide-range of clothing.

LUW is branching out overseas this summer for an event they are calling “Joyburg” to preach their ideologies in Johannesburg, South Africa on July 9, 2022. Although the LUW events are free, they sell merchandise and ask for donations.

Yet the biggest seller may be the documentary film coming to theaters on July 19, 2022—Superspreader. It tells the story of Feucht and how he “knew he had to take a stand for what he believed in: sharing the gospel, no matter the cost.”

The “cost” the film’s synopsis refers to may be the more then one million people who died from COVID-19 in the U.S., or perhaps the many transgender and queer youth who end their lives from being told they are perverted and unnatural, or could be the lives made more dire after being forced to carry pregnancies to full term, or maybe the younger generations of people who won’t learn the history of the U.S., and therefore may ceaselessly repeat it. Whichever it is, Feucht started his movement and continues to sell it and spread it, no matter what.