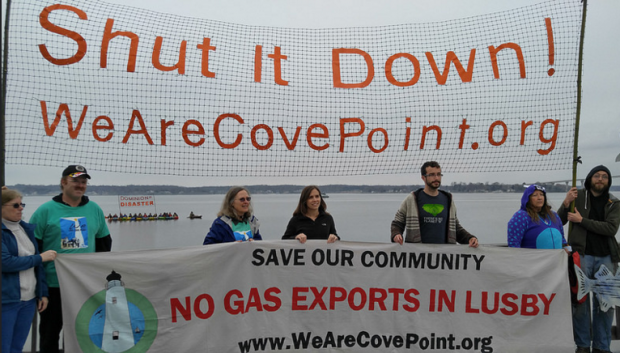 Dozens Return To Rally At State House For Safety Study

Above Photo: Kayactivists on land and water protest Dominion at Solomon’s Island in Cove Point community, by Jimmy Betts.

On Monday July 3, 2017, a few dozen people gathered again outside the State House in Annapolis to urge Governor Hogan not to turn his back on the people of Southern Maryland. A week and a half ago, Governor Hogan’s office finally responded to our request for a safety study, known formally as a Quantitative Risk Assessment or QRA, for the gas refinery, power plant and export terminal being built by Virginia-based Dominion Energy in the neighborhood of Cove Point with a resounding, “No.” The news has been a great disappointment to say the least, but We Are Cove Point and allies are not giving up the fight. 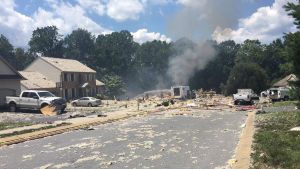 Given the gas explosion yesterday in Lancaster, PA that shredded an entire house beyond recognition, killing one man and injuring three people, anxiety levels ran high at the rally today. If one small gas pipe can destroy a house, damage surrounding homes and be felt miles away, the thought of what a 410,000 gallon tank of propane and other large tanks of chemicals to be stored in Cove Point could do is terrifying.

A group of five, including Jeff Dixon who lives close to the facility, Craig Stevens, an anti-fracking activist from Pennsylvania and Dr. Margaret Flowers of Baltimore, a resident of Annapolis and a resident of North Beach, went into  the State House to deliver a letter to the Governor asking that he reconsider his refusal to order a safety study. The letter was delivered to Robert Windley, head of the Governor’s Constituent Services.

Jeff Dixon relayed his concerns about the lack of an evacuation route in the case of an emergency at the facility in Cove Point and that residents close to the facility might not be able to be rescued. It is common practice in gas fires to allow them to burn themselves out.

Craig Stevens urged the Governor to consider that the facility at Cove Point would drive more fracking, pipelines and compressor stations. He said that people in impacted communities would pay the price in health and safety so that Dominion can ship gas to India and Japan to make a profit. Stevens urged the Governor to undo the mistakes made by the previous Governor Martin O’Malley, who permitted the facility without proper review even though he blocked a similar facility in Baltimore as being too dangerous, by looking into the facility and determining if it is safe.

Margaret Flowers raised concerns about the health impacts of pollutants from the facility that contain cancer-causing and other disease related toxins. “When the Governor refuses to simply pick up the phone and order a safety study, we feel that we have to assume that he places the value pf Dominion Energy’s profits over the value of the lives of Cove Point residents,” Flowers said. “What is it worth to the Governor to prevent childhood leukemia in Cove Point residents?” Flowers reminded the Governor’s staff that this is the only facility of its kind in the world to be placed in such close proximity to a densely-populated community.

After the letter delivery, the group joined protesters outside who spoke out and then marched around the State House making noise with drums, whistles and horns to get the Governor’s attention. Next they plan to flyer at Fourth of July parades, farmer’s markets and festivals to let people know of the Governor’s refusal to order a safety study. They will also continue to protest at the State House and to impress upon the Governor the importance of a safety study.

“The Governor may have rejected our request for a safety study, but we cannot accept that answer. Thousands of lives are at risk. We hope the Governor will change his mind and look into the concerns of residents in Cove Point and throughout Maryland,” concluded Dr. Flowers.

Here are actions that you can take to support We Are Cove Point’s Request for a safety study:

Here is a copy of the letter delivered today:

We are writing to you as residents of Calvert County, Marylanders and concerned neighbors to ask you to reconsider your refusal to order a safety study, known as a Quantitative Risk Assessment or QRA, on the gas refinery, power plant and export terminal being built by Virginia-based Dominion Energy. The project was allowed to move forward without a comprehensive study to determine the risks to the local community and whether residents could be protected if an adverse event occurs.

We understand that you support the project being built by Dominion, but we do not understand why that would necessitate refusal to order a safety study. Certainly you are concerned about the health, safety and well-being of our community.

Currently, residents living near the Dominion Energy facility have grave concerns. We know that the much smaller and practically dormant import facility carried a risk of flash fire that was 2.5 times the acceptable level, and that if a flash fire occurred, it could incinerate people within 0.8 mile of the facility. We know that the new facility will have more equipment placed on a small footprint and larger amounts of volatile chemicals. We know that an explosion happened at the smaller facility in the past. We know that another project built by Dominion experienced a fire and explosion.

How much higher is the risk of an adverse event with the new facility? How extensive would an adverse event reach? What would the impact of an explosion have on the Calvert Cliffs Nuclear Power Plant three miles away?

There are almost 2,400 homes, 19 in-home daycare centers and two elementary schools within a two mile radius of the facility. This would be a minimum evacuation zone in an emergency, but the streets in our neighborhood are not ideal for an evacuation. Hundreds of homes are located on a peninsula with only one road out, which passes the Dominion facility.

We also need to know what the health impacts of the facility will be. Dominion Energy was allowed to purchase emission credits so that it could pollute our community with over 20 tons of cancer and other disease-causing chemicals every year. The pollution from the plant will worsen the already sub-optimal ozone levels in our community leading to greater risks of respiratory problems. How many people will die prematurely as a result of this pollution? How many of our children will be stricken with leukemia?

We strongly urge you to reconsider your position and to order a QRA for Dominion Energy’s facility in Cove Point. If you continue to refuse, we can only surmise that the health and safety of Marylanders are less important to you than the profits of Dominion Energy.

We Are Cove Point