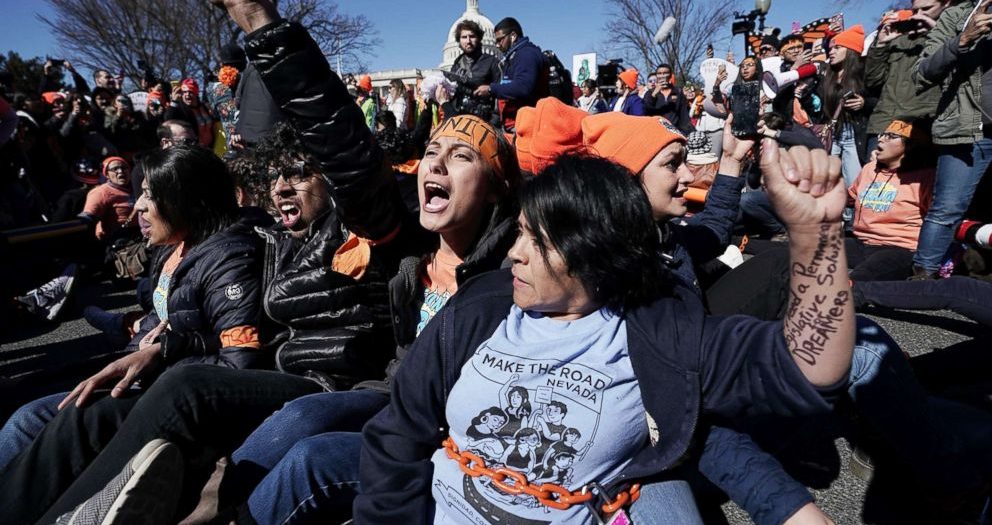 Dreamers March, Protest In DC To Save DACA

Above photo: Alex Wong/Getty Images. Immigration activists chain themselves together on March 5, 2018, on Capitol Hill.

Washington, DC – A group of Dreamers, recipients of Deferred Action on Childhood Arrivals (DACA) status that allow undocumented immigrants who arrived in the US as children to remain, marched 250 miles from New York City to Washington, DC to push members of Congress to restore DACA. They are taking action with allies who joined them in DC this week.

Here are a few reports:

Disappointed over the lack of action by the White House and Congress over the long-term fate of DACA and immigration reform, Dreamers are focusing their energies on this year’s elections and mobilizing through political action.

In September, President Donald Trump marked March 5 as the last day of the Deferred Action for Childhood Arrivals program, better known as DACA. The Obama-era executive action allowed young undocumented immigrants illegally brought to the U.S. as young children to apply to work and study in the country without fear of deportation.

But two federal judges blocked the Trump administration from rescinding the program and the U.S. Supreme Court refused to hear the government’s appeal, which expanded Dreamers’ time frame to garner congressional support for a permanent solution.

“They kind of gave people a relief,” said Astrid Silva, a DACA beneficiary and co-founder of Dream Big Vegas in Nevada who has been involved in immigrant and political activism for nearly 10 years. She worked with former Sen. Harry Reid, a Nevada Democrat, and put pressure on the Obama administration before the former president announced the DACA program.

On Monday, hundreds of Dreamers and allies marched in Washington from the American History Museum to the U.S. Capitol — blocking intersections and facing arrests — to demand that Congress pass legislation. Early Monday morning, some of the protesters staged a sit-in blocking the entrance to the Democratic National Committee headquarters. In it, some were publicly revoking their Democratic Party affiliation.

Over 80 protesters were arrested during the demonstrations, according to United States Capitol Police.

Nonetheless, the fate of Dreamers remains uncertain until Congress or the White House provide legal, permanent alternatives. Young immigrants are focusing on the elections, working to mobilize voters and push legislators.

“As a person that has come out [as a DACA recipient], there’s no retracting,” said Silva. “That’s why so many of us have wanted to have seats at the table.”

Silva thinks the court’s action has prompted bigger Dreamer rallies and more organized political mobilization in this election year because “people think it’s (DACA) a solution and we have to explain to people that this is temporary.”

Dreamers could start losing their status this week as a result of backlogs in processing DACA renewals and applications, according to data from Citizenship and Immigration Services provided by the Congressional Hispanic Caucus.

Monica Sibri, founder of CUNY Dreamers, has been an immigration advocate for over five years in New York City. She said the Dreamer movement is at its most organized, going beyond “hitting the streets” and marches to more meetings with elected officials.

Sibri has found a way to use “the national picture of what it is to be an immigrant in America” as an opportunity to hold state senators and governors accountable for their promise to protect immigrants, including Senate Minority Leader Chuck Schumer, a New York Democrat, and others.

Sibri told NBC News she has seen a response among local elected officials as young immigrants like her aim to harness the opposition to Trump’s policies to their advantage.

“Anybody that opposes a piece of the Dream Act or any piece of immigrant legislation at the state level is now being labeled as a ‘Trumper,’” Sibri said. “And they’re afraid to be compared to Trump. … Even the responses we’ve received from their offices are way higher than before.”

Across the country, other young immigrant activists are lobbying local and state officials.

“I now actually know what it’s like to talk to these people (government leaders), how to speak with their staff,” said DACA recipient and community leader Benito Costilla, who is from Temple, Texas, and attended a lobbying day and organizing training conference in Washington with the League of United Latin American Citizens. “When you talk to these people, you need to keep your head straight and stay concentrated. You can’t get too emotional.”

Other Dreamers who have joined national civil rights organizations are using their platform to mobilize politically against Trump’s immigration policies.

“He created this crisis when he ended DACA in September, and he has sabotaged every reasonable legislative solution,” Praeli said of Trump in a statement. “We will maintain pressure on him and demand that he fix what he broke when he ended DACA six months ago.”

Javier Gamboa, a DACA recipient and the director of Hispanic media for the Democratic Congressional Campaign Committee, sees this year’s midterm elections as crucial to electing officials as a way to find a solution for Dreamers and immigrants with no legal status.

Gamboa’s job at the committee is to get Democrats elected to the House. Although the party’s focus is centered on becoming the majority in Congress, for him the ambition is also personal.

Activists like Silva remain confident and hopeful that comprehensive immigration reform that protects Dreamers and their families will ultimately come, sooner rather than later.

“To the opponents of the Dream Act, those who were able to adjust their status, they’re going to be running for office — people who understand what it’s like to be afraid of La Migra,” Silva said, using slang for federal immigration officers.

Hundreds of young undocumented immigrants and their allies from Florida to California came to Capitol Hill Monday – the day President Donald Trump set for the end of the Deferred Action for Childhood Arrivals program – to protest and lobby members of Congress to pass legislation that would protect them.

The protesters held sit-ins at lawmakers’ offices, including one outside House Speaker Paul Ryan‘s office, and outside the Capitol chained themselves to one another, closing a nearby street to traffic. U.S. Capitol Police said they made 87 arrests, 68 outside and 19 inside the Capitol.

Across the street, Adela Munoz stood watching as her friends sat on the yellow lines of Independence Avenue for the protest. Munoz, a 19-year-old DACA recipient from Phoenix, Ariz., made the trip with seven others, including Arizona Democratic state Rep. Isela Blanc. Munoz watched as Blanc and two of their other friends were arrested.

“I told them that I was thankful because they don’t need to be here, but they see the urgency of it. They see that we need help because our voices sometimes don’t get heard,” Munoz said.

Munoz stayed on the sidewalk with two other friends, also Dreamers, because an arrest could mean losing their DACA protected status.

“They can actually get arrested, some people can’t,” Munoz said, tearing up.

She and her friends traveled to Washington to protest for a Dream Act extension not linked to a border wall or other immigration security issues.

“The support that people showed today is so amazing and so beautiful that it just makes me tear up with joy,” Munoz said. “It’s so lovely to see that people that you don’t even know are supporting you and your cause.”

Six months ago, Trump picked March 5 as the deadline for Congress to work out a solution to prevent DACA recipients from facing deportation. However, multiple court challenges have prevented the Trump administration from ending the program. Now, as Congress and the Dreamers await a resolution in the courts, lawmakers have paused their legislative efforts and some 700,000 DACA recipients have been plunged into a constant state of uncertainty.

While DACA renewals are being processed on the Obama-era terms that were in place before DACA was ordered rescinded, no new applications are being accepted. There were approximately 22,000 initial DACA grant requests pending as of January 31, 2018.

“So I have a year-and-a-half,” he said. “However, that does not mean that I will stop fighting for the people whose DACA expires soon.”

The protesters also laid flowers across the grass around the Capitol, spelling out “unafraid” in big letters that could be read from the windows above.

The flowers were to represent people who were undocumented, said Bruna Distinto and Abigail Tituana, both DACA recipients and students at Trinity Washington University. They said the flowers represent a proverb: “They tried to bury us. They didn’t know we were the seeds.”

Protesters chanted “mas flores,” or more flowers, as they moved from letter to letter and filled out the word. Cecilia Ruesta, a masters student from Fresno, Calif., said her flower was for her brother.

Ruesta, originally from Lima, Peru, is an organizer with United We Dream, the organization behind the flowers. Ruesta received citizenship a year ago, but her brother, whom she lives with, is still undocumented. Laying the flower was “definitely emotional,” she said.

“There’s fear in the house, period,” she said. “It’s a collective pain and frustration until everybody is protected.”

From Alejandro Alvarez, Protests at the DNC –

A group of Dreamers are blocking an intersection outside the DNC’s HQ, calling Democrats “fake allies.” https://t.co/T4n1Dq5wIq

They marched into the DNC building earlier. Security ushered them into an empty room where they spoke to the few cameras following them.

“Democrats, will you continue to delay our right to be equal?” pic.twitter.com/npu2LxVQkE