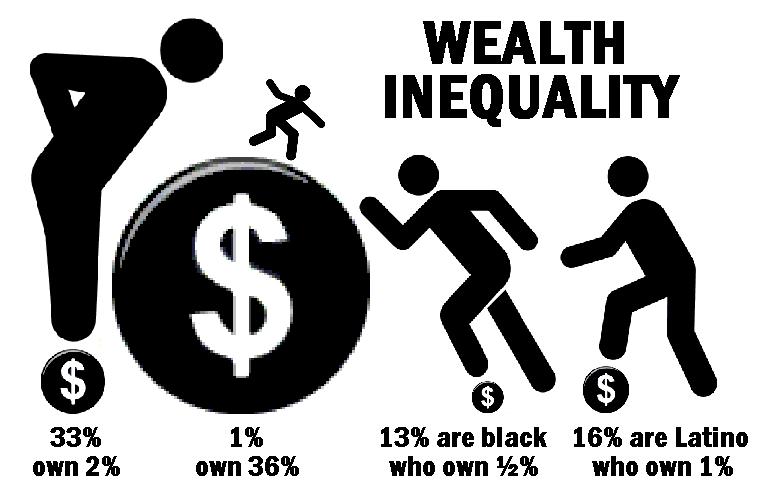 Dreams Deferred: How Enriching The 1% Widens The Racial Wealth Divide

A new report released by the Institute for Policy Studies highlights how a polarizing racial wealth divide has grown between White households and households of color over the past three decades.

January 15, 2019, the release date of this report, would have been the 90th birthday of Dr. Martin Luther King, Jr. Dr. King envisioned a future in which deep racial inequalities were eradicated and he worked tirelessly towards that mission. His tragic assassination occurred while he was organizing the Poor Peoples Campaign, his last great effort to ensure economic justice as a cornerstone of civil rights.

In light of Dr. King’s pursuit of economic justice, this report highlights how historic racial wealth disparities have been perpetuated and increased by the trend towards extreme inequality in the United States. It also puts the racial wealth divide in the context of overall wealth inequality trends. 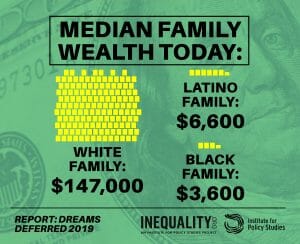 This report looks at the trends in household wealth among Black, Latino and White households over the past three decades. It relies on data from the Federal Reserve Board’s most recent triannual Survey of Consumer Finances. The Racial Wealth Divide Over the past three decades, a polarizing racial wealth divide has grown between White households and households of color. Since the early 1980s, median wealth among Black and Latino families has been stuck at less than $10,000. Meanwhile, White household median wealth grew from $105,300 to $140,500, adjusting for inflation.

Over the past three decades, a polarizing racial wealth divide has grown between White households and households of color. Since the early 1980s, median wealth among Black and Latino families has been stuck at less than $10,000. Meanwhile, White household median wealth grew from $105,300 to $140,500, adjusting for inflation. 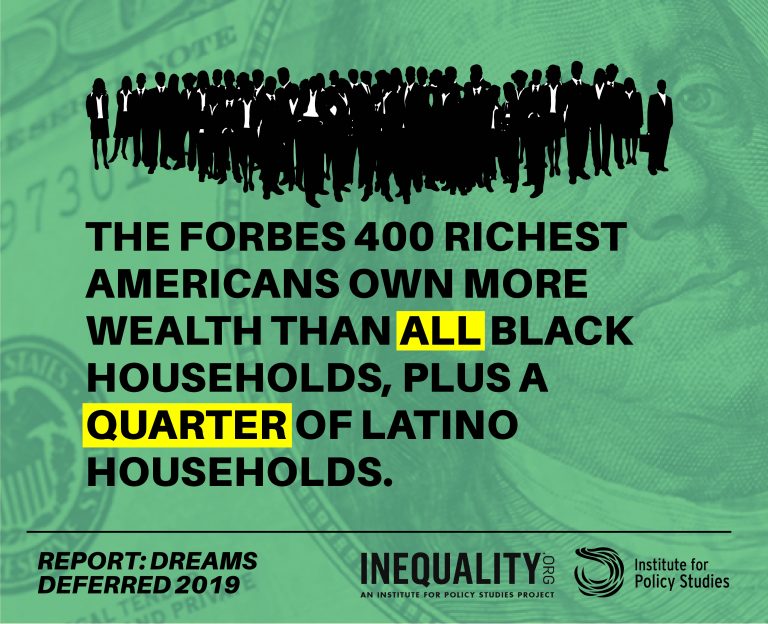 In a Deeply Unequal Economy

The widening of the racial wealth divide has coincided with the extreme concentration of U.S. wealth. The wealthiest 0.1 percent of households have grown richer while millions of families face poverty and deep-seated economic insecurity. 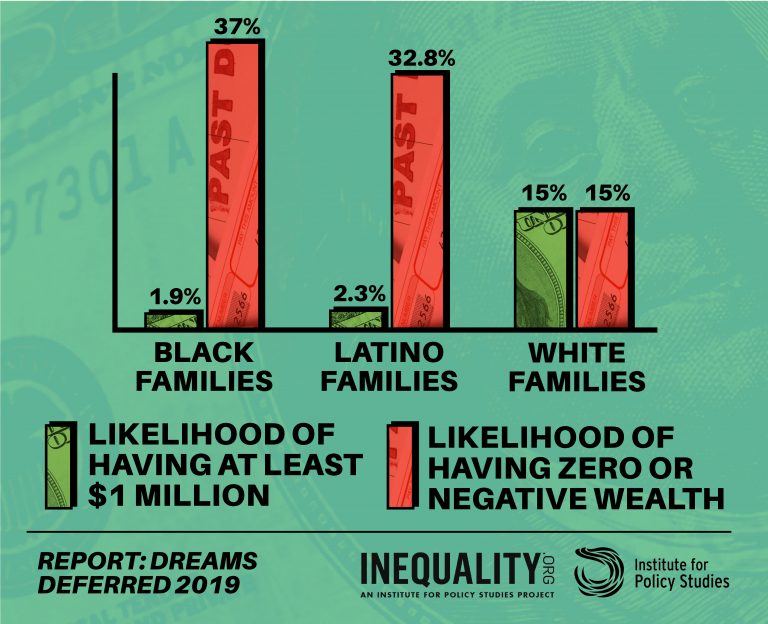 The racial wealth divide and growing economic inequality is often analyzed as two separate and concurrent trends, when in fact, they are mutually reinforcing outcomes of larger economic issues. Both the racial wealth divide and the unequal economy were created and perpetuated by public policies that favored Whites and continue to favor the very wealthy. Public policies aimed at reducing both trends will be critical to creating a more equitable economic system and a more just society overall. Such policies could include, but are not limited to:

Dreams Deferred expands on and updates two previous reports from the Program on Inequality and the Common Good at the Institute for Policy Studies, in collaboration with Prosperity Now: “The Ever-Growing Gap: Failing to Address the Status Quo Will Drive the Racial Wealth Divide for Centuries to Come,” in 2016, and “The Road to Zero Wealth: How the Racial Wealth Divide is Hollowing Out America’s Middle Class” in 2017. This report also builds on extensive research on the growing concentration of wealth in the United States catalogued in the “Billionaire Bonanza” report series released in 2015, 2017, and 2018. The most recent edition focused on the growing power and influence of intergenerational wealth dynasties.

Too often Dr. King’s “Dream” of making justice a reality for people of color is conflated with the “fantasy of self-deception” that there is “steady growth toward a middle-class utopia.” Examining the concentration of wealth and ongoing deep racial wealth inequality in light of Dr. King’s 90th birthday reminds us of the reality King spoke of in his famous “I Have A Dream Speech”: “the Negro lives on a lonely island of poverty in the midst of a vast ocean of material prosperity.”

Dr. King also stated in this speech that “America has given the Negro people a bad check, a check which has come back marked ‘insufficient funds.” Over 50 years since this famous dream was shared with the nation, we have seen wealth concentrate among the wealthiest Americans and a polarizing racial wealth divide grow between Whites and Blacks and Latinos.

Despite aspirant rhetoric and sensationalized media stories, the racial wealth divide has not improved over the past three decades. In fact, the divide has grown considerably as wealth continues to concentrate at the top leaving the rest of the country an increasingly smaller share. A targeted set of policies is imperative to begin to bridge this deep divide for generations to come. Inaction or, worse, repeating the same mistakes that led to this situation will simply widen further the divide and create greater economic instability for the country at large.