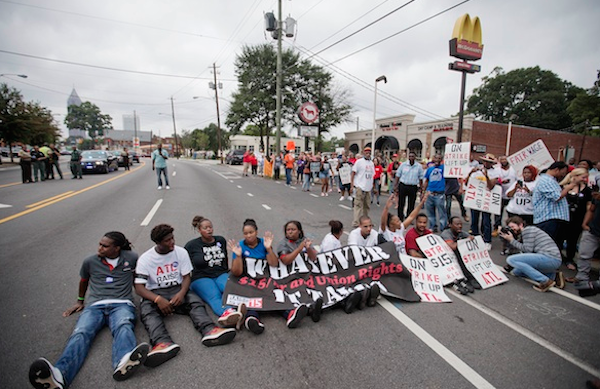 Politics, if we take politics to mean the shaping and discussion of issues, concerns and laws that foster the common good, is no longer the business of our traditional political institutions. These institutions, including the two major political parties, the courts and the press, are not democratic. They are used to crush any vestiges of civic life that calls, as a traditional democracy does, on its citizens to share among all its members the benefits, sacrifices and risks of a nation. They offer only the facade of politics, along with elaborate, choreographed spectacles filled with skillfully manufactured emotion and devoid of real political content. We have devolved into what Alexis de Tocqueville feared—“democratic despotism.”

The squabbles among the power elites, rampant militarism and the disease of imperialism, along with a mindless nationalism that characterizes all public debate, have turned officially sanctioned politics into a carnival act.

Pundits and news celebrities on the airwaves engage in fevered speculation about whether the wife of a former president will run for office—and this after the mediocre son of another president spent eight years in the White House. This is not politics. It is gossip. Opinion polls, the staple of what serves as political reporting, are not politics. They are forms of social control. The use of billions of dollars to fund election campaigns and pay lobbyists to author legislation is not politics. It is legalized bribery. The insistence that austerity and economic rationality, rather than the welfare of the citizenry, be the primary concerns of the government is not politics. It is the death of civic virtue. The government’s system of wholesale surveillance and the militarization of police forces, along with the psychosis of permanent war and state-orchestrated fear of terrorism, are not politics. They are about eradicating civil liberties and justifying endless war and state violence. The chatter about death panels, abortion, gay rights, guns and undocumented children crossing the border is not politics. It is manipulation by the power elites of emotion, hate and fear to divert us from seeing our own powerlessness.

“Those who manipulate this unseen mechanism of society constitute an invisible government which is the true ruling power of our country,” Edward Bernays observed in his 1928 book, “Propaganda.” “We are governed, our minds are molded, our tastes formed, our ideas suggested, largely by men we have never heard of.”

Politics in the hands of the corporate state is anti-politics. It is designed to denigrate and destroy the values that make a liberal democracy and political participation possible. It is a cynical form of mass control. Corporate money has replaced the vote. Dissent is silenced or ignored. Political parties are Punch and Judy shows funded by corporate puppeteers. Universities, once the epicenter of social change, are corporate headquarters, flush with corporate money, government contracts and foundation grants. The commercial press, whose primary task is attracting advertising dollars, has become an arm of the entertainment industry. It offers news as vaudeville.

Genuine political activity, the organizing work needed to protect citizens from the abuses of power, exists only on the margins of society. Politics in America has gone underground.

The political philosopher Sheldon Wolin, who coined the term “inverted totalitarianism” to describe our corporate state, asks an essential question in his book “Democracy Incorporated.” He writes: “Can the citizen relearn the demands that democracy places on its highest, most difficult office—not, as commonly supposed, on the office of the president, but on that of the citizen? And that question has a practical corollary: the reinvigoration of citizenship requires more than a civics lesson. It would necessitate a reordering of basic power arrangements and a different understanding of civic commitments from that of spectator.”

The relearning will be done in defiance of the established systems of power. The purported liberal democratic institutions, including the Democratic Party, are vehicles used to stymie rather than promote democratic reform.

Tocqueville in “Democracy in America” wondered what sort of despotism democratic nations should fear. He was prescient about our demise. He wrote:

“I see an innumerable crowd of like and equal men who revolve on themselves without repose, procuring the small and vulgar pleasures with which they fill their souls. Each of them, withdrawn and apart, is like a stranger to the destiny of all the others: his children and his particular friends form the whole human species for him; as for dwelling with his fellow citizens, he is beside them but he does not see them. …

Above these an immense tutelary power is elevated, which alone takes charge of assuring their enjoyments and watching over their fate. It is absolute, detailed, regular, farseeing, and mild. … It seeks only to keep men fixed irrevocably in childhood. … It provides for the citizens’ security, foresees and secures their needs, facilitates their pleasures, conducts their principal affairs, directs their industry, regulates their estates, divides their inheritances; can it not take away from them entirely the trouble of thinking and the pain of living?

Thus after taking each individual by turns in its powerful hands and kneading him as it likes, the sovereign extends its arms over society as a whole; it covers its surface with a network of small, complicated, painstaking uniform rules through which the most original minds and the most vigorous souls cannot clear a way to surpass the crowd; it does not break wills, but it softens them, bends them, and directs them; … it does not destroy, it prevents things from being born; it does not tyrannize, it hinders, compromises, enervates, extinguishes, dazes, and finally reduces each nation to nothing more than a herd of timid and industrious animals of which the government is the shepherd.

There are groups on the front lines of economic, racial and environmental distress that are engaging in what Wolin and Tocqueville would describe as politics. They are not spectators. None of them is allied with a mainstream party or movement. Their voices are not heard on any of the major broadcast networks or in the mainstream press. They have little financial support. And their activists know that jail time comes with the job description. Any engagement in the actual political life of the nation will be through them. To invest energy in what the state defines as politics, including presidential campaigns, is a waste of time.

The call by the Climate Justice Alliance for a week of direct action, Sept. 17 through 24—coinciding with the gathering of world leaders at the United Nations summit—is politics. The coordinated activities during the same week known as Flood Wall Street are politics. The campaign by fast food workers for a livable wage is politics. The effort to block the Keystone XL pipeline is politics. The building of local food initiatives is politics. And there are many others. We must seek them out. We must embrace these groups to relearn what it means to be citizens and to participate in democracy. We must discredit and disrupt the system of faux politics that characterizes the corporate state. If we engage as citizens, rather than as spectators, if we reclaim politics, we might have a chance.”