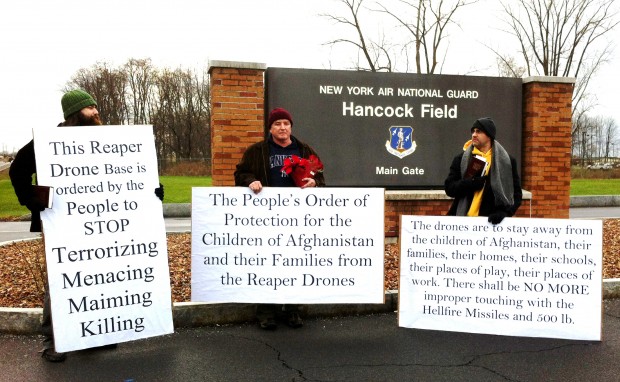 On December 9th, 2013, Colville and two Yale Divinity students brought a People’s Order of Protection to the front gate of the base to demand an end to drone attacks which are carried out from Hancock.  This action was in response to a recent request by Raz Mohammad, an Afghan national, whose brother-in law was killed by a U.S. military drone strike. Gate personnel rejected the petition.

Colville, who is not an attorney, chose to represent himself. He faced five charges: Obstruction of Government  Administration (max 1 yr), 2 Disorderly Conduct charges (15 days max each), Trespass (15 days max), and violation of an Order of Protection (OOP). The order was on behalf of Colonel E. Evans, a base commander; a violation carries a one-year maximum sentence. Activists have already successfully challenged the validity of these OOPs, which Col. Evans stated serves “to keep the protesters away from my base.”

Resister Colville’s action is a part of a global campaign to ban weaponized drones. Locally, the five-year-old Upstate Drone Coalition campaign has resulted in multiple trials, acquittals and convictions, including the sentencing of grandmother Mary Anne Grady Flores to one year for taking photos of an Ash Wednesday demonstration from the cross-walk in front of the base. She was found guilty of violation of her OOP.

After his trial Colville stated, “This court by its conduct continues to condemn itself by manipulating and misapplying the law, and intentionally disregarding the cries for justice from those who the law is supposed to protect. The petition that we brought to the base, the People’s Order of Protection, demanding that we give relief to the victims of these horrible drone killing machines, remains unresponded to.  We will continue to tell the truth in the streets of the Town of DeWitt and in its court room until true justice flows down like a mighty river.”

An hour before the trial began, before any testimony had been heard, presiding Judge Jokl promised to sentence Colville to the maximum penalty allowed. During this meeting, in judge’s chambers with Mark Colville and Assistant District Attorney McNamara, Colville asked “Why?”

The judge responded, “Because I think you deserve it.”