Daniel Hale, who revealed information on the targeted assassination program while President Barack Obama was in office, will be sentenced in July.

Daniel Hale, who blew the whistle on the United States government’s targeted assassination program that includes drones, pled guilty to transmitting and retaining “national defense information” in violation of the Espionage Act.

The guilty plea by Hale makes him the first whistleblower to be convicted under the Espionage Act during President Joe Biden’s administration.

A change of plea hearing was held on March 31 in the Eastern District of Virginia, around a week before Hale was scheduled to go to trial.

Judge Liam O’Grady permitted Hale to remain under supervision by a probation officer until sentencing on July 13.

Though Hale pled guilty, prosecutors from the Justice Department opposed canceling the trial altogether and refused to dismiss the four remaining charges. Hale’s attorney questioned why this would be allowed.

O’Grady seemed to recognize the four remaining charges criminalize much of the conduct already covered in Hale’s plea. Often this is referred to as charge stacking. Yet the judge permitted the government’s extraordinary and unusual request, leaving open the possibility of a trial if prosecutors are unhappy with sentencing.

Under President Barack Obama, CIA whistleblower John Kiriakou was targeted in the Eastern District of Virginia with an Espionage Act prosecution. He wound up pleading guilty to violating the Intelligence Identities Protection Act in order to ensure he only went to prison for 30 months.

Since Hale is not permitted to offer a public interest defense, Kiriakou added,”That’s an injustice.”

“So I hope Judge O’Grady recognizes the good in what Daniel Hale has done and gives him the lightest possible sentence.”

Hale was part of the Joint Special Operations Task Force in 2012 and identified “targets” for kill and capture. From December 2013 to August 2014, he was a contractor at the National Geospatial-Intelligence Agency.

The U.S. government targeted Hale for prosecution after he disclosed documents in 2014 to Intercept founding editor Jeremy Scahill for his “Dirty Wars” project, which included a book and a film. The information he revealed also helped the Intercept publish the “Drone Papers.”

Hale appeared in the 2016 documentary “National Bird.” He wore a pin supporting U.S. Army whistleblower Chelsea Manning and followed CIA whistleblower Jeffrey Sterling’s prosecution. The FBI raided his home on August 8, 2014, while the film was in production.

He was charged in March 2019 with violating the Espionage Act and other related offenses, and in May, he was arrested.

It is unclear why the Justice Department took several years to charge Hale.

At the change of plea hearing, O’Grady did not believe Hale posed a flight risk, since he was present at the proceedings. But he was particularly concerned with Hale’s mental health and urged him to notify his probation officer if he felt like hurting himself.

Hale, who apparently survived a motorcycle accident recently, told the court he was living with supportive people, who for some time allowed him to share space and without paying rent. He is doing chores and cooking meals for his roommates while quarantining during the COVID-19 pandemic. 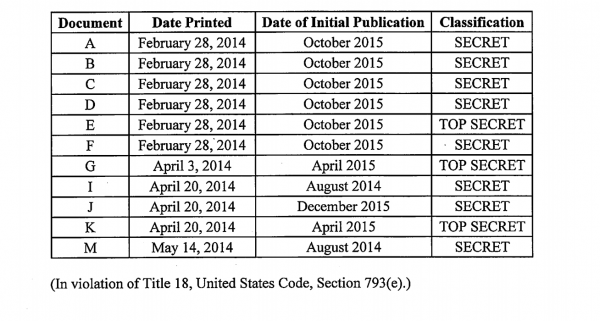 A list of documents in the superseding indictment against him points to what Hale allegedly exposed.

Prior to the “Drone Papers,” a report, “Watch Commander: Barack Obama’s Secret Terrorist System, by the Numbers” was published by Scahill and Ryan Devereaux. It exposed how “nearly half of the people on the U.S. government’s widely shared database of terrorist suspects are not connected to any known terrorist group.”

“More than 40 percent are described by the government as having ‘no recognized terrorist group affiliation,’” the journalists reported.

The report brought critical attention to an out-of-control watchlisting system.

In October 2015, “The Drone Papers” were published and revealed criteria for how the White House approved individuals for targeted assassinations and revealed “small footprint counterterrorism operations” that were launched in Somalia and Yemen.

TF 48-4, a special operations task force, was deployed to escalate wars in East Africa and the Arabian Peninsula. They were commanded from a center at Camp Lemonnier in Djibouti. They utilized a maritime drone platform and were supposed to hunt down members of al Qaida in the Arabian Peninsula (AQAP) and al Shabaab.

New details about British citizen Bilal el-Berjawi, “who was stripped of his citizenship before being killed in a U.S. drone strike in 2012,” were also made public.

As Kiriakou recalled, he felt an “odd sense of relief” after he pled guilty because the worst part—the unknown—was over.

“The worst part is laying in bed at night and thinking about spending the rest of your life in prison while knowing that you did the right thing,” Kiriakou said. “And so as odd as it might sound, changing a plea to guilty and finally knowing what your sentence is going to be can be oddly liberating.”

Yet Kiriakou knew he would receive 30 months when he pled guilty. Hale does not know how long he will be sentenced to prison, and he will face the additional fear and anxiety of knowing prosecutors may demand a trial for the remaining counts if the court does not approve a harsh enough sentence.

Hale blew the whistle on the powers that the Obama administration arrogated to itself to act as judge, jury, and executioner and transform the world into a battlefield without regard for human rights or international law. He has suffered through a cruel prosecution that was destined to end in a plea agreement because there is no whistleblower defense under the Espionage Act.

Unfortunately, this sends a clear signal that the war on whistleblowers escalated under Obama and continued by Trump remains in full effect.

Hale is likely to receive a four or five-year prison sentence in July that will come with the added risk of potential exposure to COVID-19 if the Bureau of Prisons has not distributed enough vaccines to prisoners.