Several Jefferson County, W.Va., residents demonstrated at home improvement retailers in Gaithersburg, Md., in an effort to pressure them to ban Rockwool insulation products from their shelves. They object to Rockwool North America, a division of the Danish Rockwool Group, siting a mineral wool factory in their county–one which will burn coal and gas in close proximity to public schools.

Pulling bright red bales of Rockwool insulation from the shelves at the back of the Lowe’s store, the eight protesters built a replica factory, complete with two towering smokestacks and a chimney billowing clouds of pollutants. A state agency has granted a permit allowing the factory to emit 153,000 tons per year of greenhouse gasses and nearly 3,000 tons per year of pollutants, including formaldehyde, particulate matter, volatile organic compounds (VOCs), and sulfur dioxide.

Store security asked them to leave, but they persisted.

“This is what Rockwool is doing in our community. They’re just throwing a factory in the middle of our county where things are beautiful and where we have children across the street,” Resist Rockwool President Tracy Danzey said.

Tireace Johnson read from an informational flyer which they were handing out to employees and customers. Burning more than 90 tons of coal and 1.6 million cubic ft. of fracked gas daily, she said, will “cause chronic and fatal diseases of the lungs, liver, kidneys, brain and heart. Not only is it going to effect the children who are within less than one mile radius—going to a public school—but it’s going to destroy all of our beauty, recreation, clean air and clean water.” 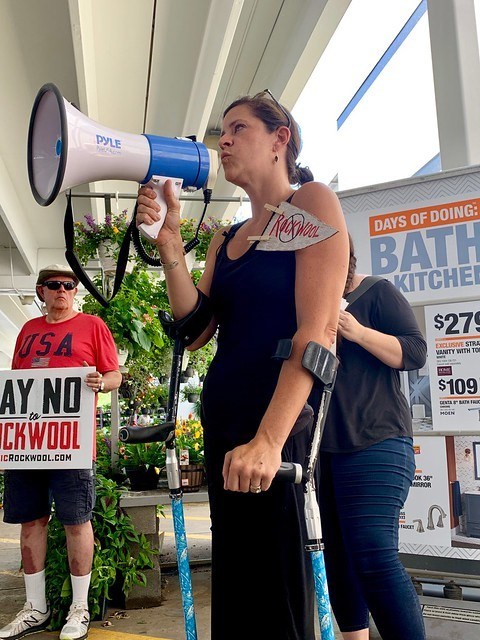 The demonstrators also visited the Home Depot store in Gaithersburg, where they stood outside the door in nearly 100-degree heat, spoke on a bullhorn and again handed out information to customers.Rockwool maintains that the facility will not cause adverse health effects. The company also says it was invited to Jefferson County by local and state government and will provide about 150 jobs.

As part of its boycott campaign, Resist Rockwool urges Home Depot to cancel a contract agreement made with Rockwool. Michael Zarin, VP of Rockwool Group Communications, couldn’t confirm the existence of such a contract, saying the company does not disclose details of commercial agreements with retail customers. Home Depot did not respond to an inquiry.