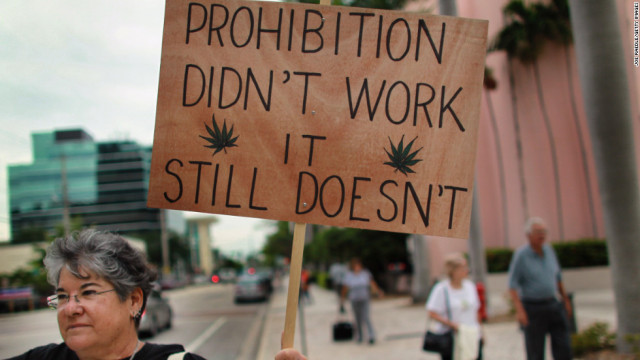 Above Photo: From video on CNN.

They’ll be wielding facts and compassion in the face of ignorance and hatred.

American drug policies have a problem—they’ve been driven by fear rather than facts for over a century. Although there had been notable gains over the past eight years towards more evidence-based drug policy, many worry that we may be heading in the wrong direction under the Trump administration. That’s why on April 22nd, drug policy researchers and advocates are taking to the streets of D.C. for the national March for Science, wielding facts and compassion in the face of ignorance and hatred.

From the first opium laws in the 1800’s targeting Chinese immigrants to the crack laws of the 1980’s which disproportionately criminalized and incarcerated black men, the history of drug policy in the US illustrates how racism, xenophobia, and stigma can be weaponized in the name of “public health” and “safety.” Paradoxically, the evidence suggests that drug prohibition has actually contributed to poorer health outcomes and higher mortality rates among drug users, while also facilitating the growth of an illicit drug market which threatens the safety and well-being of people around the globe. In addition, targeting racial and ethnic minority groups for harsher penalties has had a ripple effect on individual users and their communities by depriving them of social and familial supports as well as economic opportunity.

There are some serious barriers to expanding our research-base in regards to drugs and drug policies; largely due to limited funding for research with scheduled substances and little incentive to challenge the status quo. Drug scare tactics work- they befuddle, confuse, and terrify the public and policymakers alike while justifying an even harsher crackdown on users. Images of face-eating zombies to crack babies are more mobilizing than the reality that the vast majority of people who use drugs never get addicted or the therapeutic benefits of some substances, such as marijuana, are worth exploring.

Many American policymakers continue to think they can arrest their way out of our drug problems even though evidence shows that a “tough on drugs” approach is more harmful (and costly) than helpful. A look abroad shows us that nations which have decriminalized drugs, embraced harm reduction, and expanded treatment access have demonstrated positive outcomes for the health of drug users and their communities-at-large. At the same time there is a growing number of American lawmakers who have been forced to face the limitations of prohibition at home, realizing that evidence-based strategies offer a promising alternative to an overreliance on the criminal justice system as a solution to the public health problem of substance use.

But the good news is that there is a lot of solid research about drugs and drug policy, including high quality, accurate information about a range of substances, and what to do about them. Drug and drug policy research is a rich, interdisciplinary field that can help us sort the fact from the fiction and, more importantly, help us make smart policy choices that will improve the health and safety of individuals, families, and communities.

Take the current opioid crisis as just one example. A large body of research from Canada and Europe has shown that drug consumption rooms (safe and hygienic places where people can use drugs) can reduce overdose deaths and the transmission of blood-borne diseases, while linking people to treatment, medical care, and services. Once viewed as too controversial to be implemented in the U.S., several jurisdictions are now seriously considering them. Research has also given us life-saving naloxone – a medication that reverses the effects of an opioid overdose and has been responsible for saving thousands of lives. And thanks to science, more and more people are finding help through medication-assisted treatments, such as methadone and buprenorphine, for opioid use disorders.

While these signs of progress are encouraging and desperately needed, the Trump Administration’s disdain for science and approach to drug policy are worrisome. Trump not only eschews science, he is actively undermining it. For example, under Trump’s budget proposal, the National Institutes for Health would take a $1.2 billion cut focused primarily on research grants. NIH is responsible for the vast majority of drug research in the country. His desire to gut the Affordable Care Act and move to Medicaid block grants will make access to substance use treatment all the more difficult, especially if it is no longer considered essential health coverage. And his racially coded “law and order” rhetoric, along with the appointment of old school drug warriors, like Attorney General Jeff Sessions, marks a return to a punitive drug war strategy of the past that a significant body of scholarship has deemed an abject failure.

We know better, and we must do better. Scholars who work in drug policy and all those who care about effective, evidence-base drug policy cannot stand by and watch all the progress we’ve made be undermined. Too much is at stake. That’s why it’s time for researchers to leave their labs and their classrooms and take to the streets. It’s time to turn from the misinformation, fear, and stigma that too often drive drug policy and insist on approaches that ground our policies in science and compassion.

This first appeared on the Drug Policy Alliance Blog