Duke Energy Offers $6B For Solar, Batteries And EVs

Florida is set to get a lot more solar power and grid batteries — in exchange for losing a future nuclear power plant.

On Tuesday, Duke Energy Florida filed a revised settlement that lays out a four-year, nearly $6 billion investment into 700 megawatts of solar PV, 50 megawatts of energy storage, 500 electric-vehicle chargers, and smart meters and grid modernization across the state.

In exchange, Duke will be allowed to shut down its Levy Nuclear Project — one of many planned nuclear power plant projects being canceled in the wake of the Westinghouse bankruptcy and broader industry disruption. And, in a turnaround from last week’s request for an 8.3 percent rate hike, the new plan would keep rates in line with inflation over the next four years.

Duke Energy Florida, which owns about 8,800 megawatts of generation capacity and serves approximately 1.8 million customers, will instead absorb more than $150 million in closing costs, and pass the rest on to customers to the tune of $2.50 per megawatt-hour. It will also reduce customer costs by $2.53 per megawatt-hour by spreading the costs for under-recovered fuel over two years rather than one.

The settlement with the Florida Public Service Commission and industry, commercial, agricultural and environmental groups represents a major new commitment to clean and flexible energy resources for the Duke Energy subsidiary. The 700 megawatts of solar is an order of magnitude greater than its current PV portfolio, and will be compressed from 10 years to four under the new proposal. And its 50-megawatt energy storage deployment and 500-charger EV infrastructure investment are its first large-scale forays into those technologies.

Florida’s energy storage landscape has until recently been dominated by pilot projects, according to the GTM Research Energy Storage Data Hub. But in the past year, we’ve seen two of the state’s biggest utilities commit to multi-megawatt projects: Duke and Florida Power & Light.

In November, Florida Power & Light won PSC approval for a four-year rate case that includes a 50-megawatt pilot program to “enhance operations of existing and/or planned solar facilities, among other potential benefits.” The NextEra Energy subsidiary has been working on pilots, including a battery backup system at the southern tip of Everglades National Park and second-life EV batteries in Miami; it also has eight 74.5-megawatt solar farms opening across the state.

Duke Energy Florida, for its part, didn’t provide many details on how it plans to develop and deploy its new 50-megawatt target. Its previous experience includes a 100-kilowatt solar-battery system it deployed with the University of South Florida St. Petersburg in 2015.

The utility, acquired by Duke as part of its merger with Progress Energy, also didn’t provide specifics on its plans to roll out smart meters to customers, although it did note they will “enable more bill-lowering tools, access to more information about energy use, and the ability to receive usage alerts, outage notifications and customized billing options once fully implemented.”

Duke is also struggling to absorb the costs of closing down nuclear power plant projects in North Carolina. Last week, Duke told state regulators it was abandoning its Lee Nuclear Station project, and asked for permission to raise rates by 13.9 percent to cover the costs.

Across its six-state territory, Duke Energy still gets most of its electricity from natural gas, coal and nuclear power plants, with wind making up about 1 percent and solar power about 0.5 percent. The screenshot below from Duke’s power plants website shows only two solar projects on-line in Florida, compared to two coal-fired power plants and 11 gas-fired power plants — a ratio that’s set to radically change over the next four years. 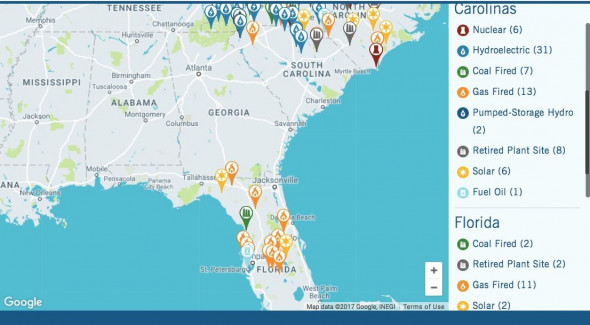