Earth Day To May Day Protests Begin In DC With ‘Essential, Not Expendable’ Protest

Above: Earth Day to May Day Banner. All photos from Shut Down DC-Climate Strike Washington, DC Facebook page.

Workers waved and cheered as activists toured DC in cars and bikes, sending messages of encouragement and justice.

Washington, DC, April 27 –  Three moving protests involving 135 people celebrated essential workers as well as condemned employers and legislators for avoidable illnesses and deaths. They carried banners that read, “Essential, Not Expendable, and “Free Them All.”

The three caravans – two consisting of cars and one of people on bicycles – visited grocery stores, hospitals, and government agencies, before coming together in Anacostia in SE DC, where they were joined by a live go-go band.  The actions were organized by activists with Black Lives Matter DC, 1199SEIU, and ShutDownDC. 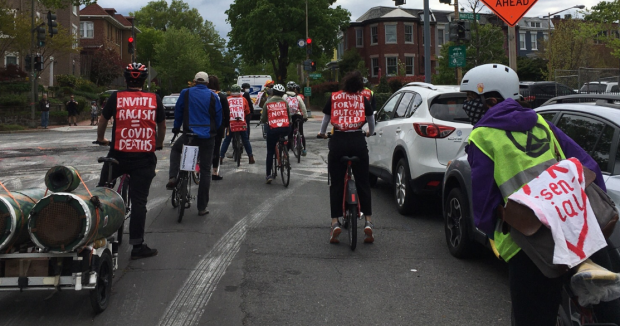 The “Essential, Not Expendable” protest is part of the 10-day Earth Day To May Day action organized by the ShutDownDC alliance, which started on April 22, the 50th anniversary of Earth Day. The final four days will include online and in-person actions that draw the connections between climate change, workers’ rights, racial injustice, and several other issues.

“Essential workers have literally become the Covid-19 task force,” said Nee Nee Taylor, Direct Action Coordinator for Black Lives Matter DC. “At the same time we have loved ones who have been sentenced to death in prison or in jail,” she said, referring to the exponential number of coronavirus cases in jails in DC and across the country. Data has shown unequivocally that Black and Brown people are dying from COVID-19 at a disproportionately high rate. 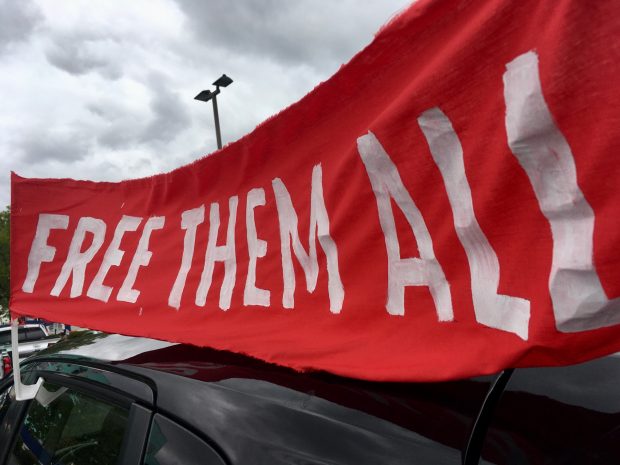 Earth Day to May Day, April 27, Washington, DC, Free Them All

The protest highlights the plight of the most vulnerable members of our community, including immigrant workers and people who are in jails, prisons, and ICE detention centers around the region and across the country, facing a potential death sentence as a result of COVID-19. Activists condemn employers and decision-makers who have sacrificed so many for a profit margin.

At the end of the jubilant moving protest, police shut down the go-go band after removing their personal protective equipment (PPE).

The police are shutting it down. They removed their PPE while ordering people to leave #ShutDownDC pic.twitter.com/nJnqDRYcs1

Outside of the H Street Whole Foods, bikers chalked the sidewalk with dozens of messages of support for workers. The visits also included the DC Jail, Hope Village, the DC Housing Authority, and the home of DC Ward 7 Councilman Vincent Gray, Chair of the Committee on Health. 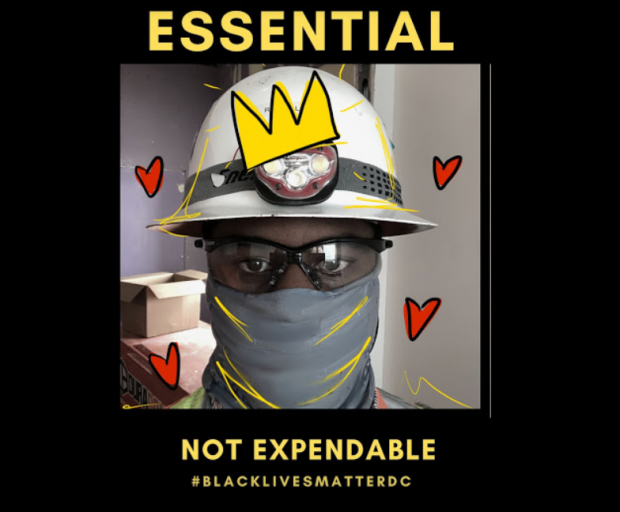 Each day of the Earth Day To May Day action focuses on a specific theme, including local struggles for justice, communities that are sacrificed for fossil fuel extraction, and the essential workers who are the heroes of the COVID-19 pandemic. The daily themes are:

April 28  Bail Out the People and #CancelRent

Tomorrow, April 28, the Sunrise DC Hub, the DC Tenants Union, and ShutDownDC will hold a day of action to demand the District #CancelRent. Activists will make hundreds of phone calls to Mayor Bowser and the DC Council demanding that they cancel rent and mortgage payments during the COVID crisis and implement the Reclaim Rent Control platform. The demands of the phone calls will be further amplified by a banner drop and social media promotion throughout the day.

ShutDownDC is an alliance of people committed to an array of social justice issues, coming together to highlight the overlapping causes of the climate crisis in the United States. Across the issues of climate, race, immigration, inequality, and workers’ rights and against the backdrop of the COVID-19 pandemic, hundreds of activists are demanding a just, healthy, and sustainable world. On September 23, 2019, the alliance shut down rush-hour traffic in the nation’s capital with 2,000 people and 17 blockades at key intersections. The alliance demands transformative action on the climate crisis while emphasizing the connection between climate change and other social issues including migration, war, race, and gender justice. 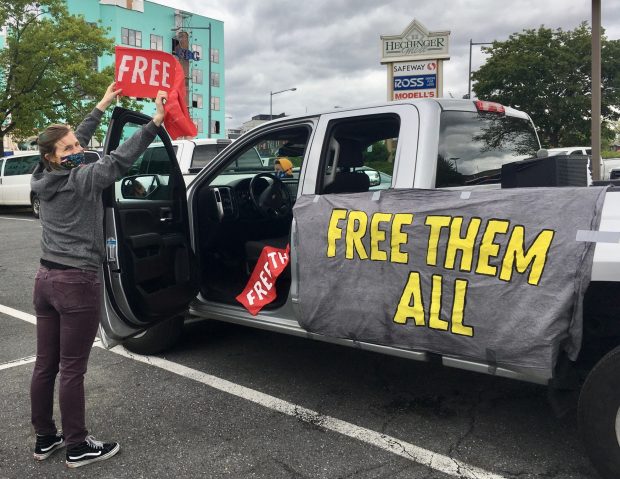