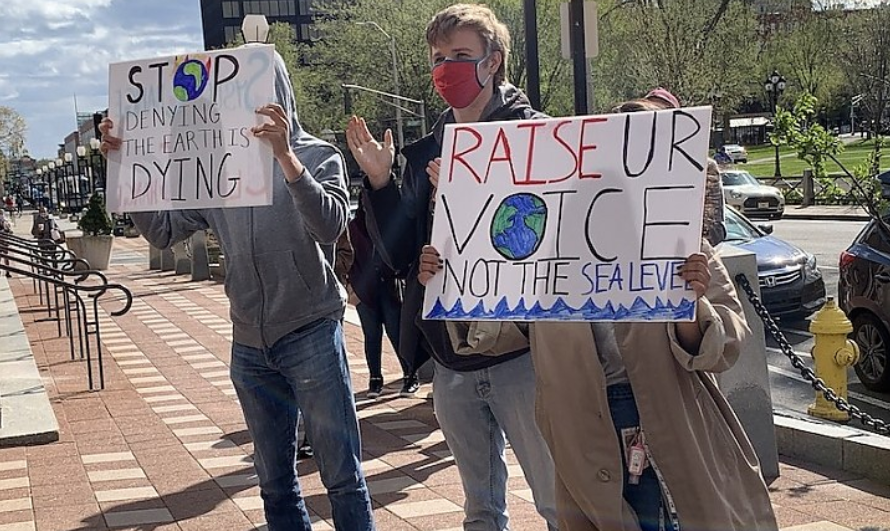 New Haven, CT – At the direction of local musician Freddy B, New Haveners marked Earth Day by singing, clapping and waving posters to the chorus of the anti-war classic “Give Peace A Chance.”

The event united organizations that promote anti-gun violence, climate justice, and peace/antiwar causes. Earth/Peace Day also served as a public response to a non-binding referendum on the 2020 municipal election ballot, in which 83 percent of voters approved a call for redirecting national military spending to cities for an environmentally sustainable economy, jobs, and human needs.

“A lot of people think that because we placed this event on Earth Day that we’re just going to be talking about climate change, but there’s really more that we want,” said High School in The Community senior Johanyx Rodriguez (pictured), a student representative to the city Peace Commission.

“There is definitely a lot of support on the passing of the military referendum and the continuation of making sure that our money goes towards social solutions, whether it be for the Green New Deal, or to fund scholarships so kids could go to college without having to worry about it,” Rodriguez said.

Earth/Peace Day attendees circulated a petition to Connecticut’s members of Congress as a follow-up to the referendum.

“The people of New Haven spoke very loudly that that’s what we want. and it’s not the first referendum that New Haven has held. The problem is that our members of Congress do not listen to the people,” said Greater New Haven Peace Council President Henry Lowendorf.

Louis Burch from Citizens Campaign for the Environment discussed the organization’s work to expand the state bottle bill to broaden the kinds of bottles eligible for container deposit programs and ultimately lead to less litter and pollution across Connecticut.

The rally ended with Peace Commission member Millie Grenough (pictured) teaching an original song. She led the crowd in chanting: “Where do we want our green to go? How do we want our taxes spent?”