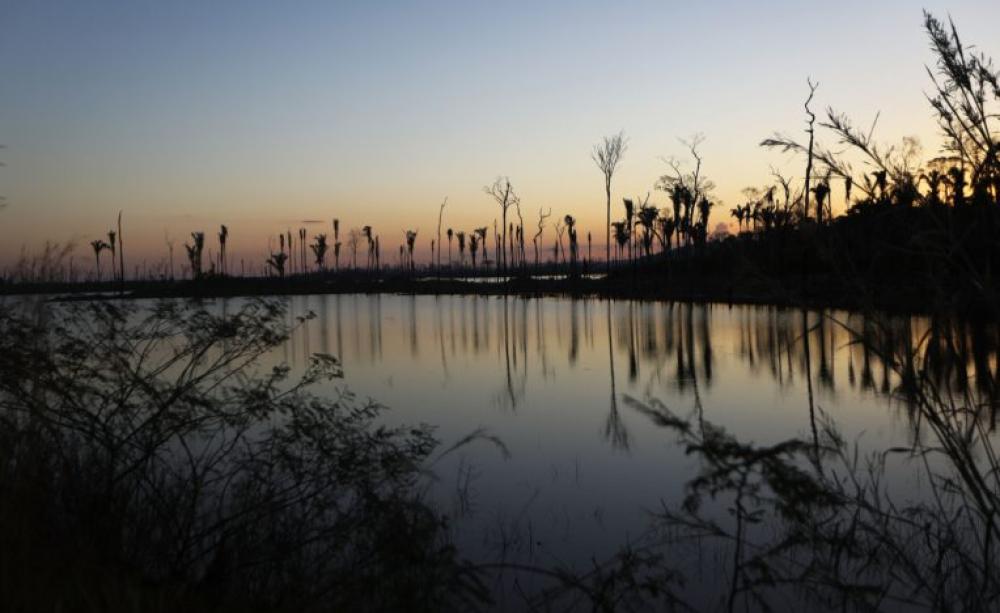 Plundering nature is the norm within our legal and economic systems. Our survival depends on charting a new course.

As has now been widely reported, the Amazon rainforest is on fire due to a mixture of fires started for land clearance and the effects of climate change.

People start fires to clear out rainforest so as to use the land for other purposes, such as cattle ranching and farming. It’s a crime against the rainforest, but also against the indigenous people who live there and whose land it arguably is.

Destruction of the Amazon is not new – it’s been happening for decades. But this time the scale is different, with the fires are being furthered by a fascist government. However, it’s important to understand that the burning of the Amazon is not actually exceptional; it’s just a spectacular example of the normal way that humans dominate, plunder and destroy Nature all around the world.

As Capra and Mattei set out in their book The Ecology of Law, our politics, economics, law and culture have long been based on the idea that humans are the only thing that matter.

We see ourselves as separate from the rest of Nature, defining it as our environment instead of anything in its own right. Humans are the near-exclusive focus of our politics and economics, and when we measure success, we focus on reductionist metrics like GDP while ignoring anything like sustainability.

In our legal systems, the fundamental unit is the individual rights-bearer, based on an understanding of our society as made up of atomised individuals.

We do not recognise that in reality, human life and freedom is that of individual humans who are interconnected with each other and the world around us. Instead of atomised individuals, our law and general worldview should instead include the network of relationships within which we live.

Our environment provides us with the conditions to live, such as clean air and water, arable soil and temperatures suitable for human life. Even leaving aside the idea that Nature has moral value and is worthy of respect, our legal and economic systems fail to protect the conditions which we need to survive.

We view aspects of Nature as ‘natural resources’ or ‘natural capital’. Legally, they are just things which are ours for the taking, save for the occasional exception of a protected species or national park.

Land, ecosystems and animals all fall within the scope of property law, the starting point of which is finders keepers. Anything in existence is a res nullius, unowned until the first person claims it.

This finders keepers approach to owning Nature it isn’t just about humans dominating Nature; it’s also humans dominating other humans. Indigenous people, many of whom have long lived in harmony with Nature, have been and continue to be forced off their land in the Amazon and the world over.

Ownership is near-absolute. The object, whether it’s your bike or a forest, has no rights of its own, and the owner can essentially treat it however they see fit. Rainforests do not have any right to exist, any right to be left alone to simply be rainforests. Landowners do not have any significant responsibilities to the land, to the rest of Nature, or to other people: the land is yours to do as you wish with.

When our international legal system developed during the colonial period, it distinguished between civilised nations and barbarians. Civilised nations arrived in places where ‘uncivilised’ people lived and claimed the land of indigenous people who lived there, justifying that it was for their benefit, that they weren’t fit to own things, and that they didn’t even have a system of ownership anyway, and therefore it was unowned property ready to be claimed by a coloniser.

Our legal systems and approach to ownership were forced upon indigenous people as we colonised the world, and these land grabs continue to happen.

Ownership, the idea that a rich individual, a corporation or even a nation state can own land, is never really justified. It’s just treated as a fact of life, something which liberal philosophers deduced as being morally justified and a fundamental human right simply because they saw people do it. While there are some limitations, such as environmental regulations and the need for planning permission, these still come from the starting point of humans owning Nature and take little account of safe ecological limits; legally, Nature does not have rights to protect itself.

The burning of the Amazon is not exceptional; humans have been plundering, subjecting and abusing land throughout the whole modern period, with activities like deforestation, mining and repurposing huge swathes of land for human agriculture entirely normal.

This is killing us.

The notion that we share this planet with the rest of Nature, or even that we ought, perhaps, to limit the scale of ecological destruction such that human life on this planet can be sustained, is entirely absent. The relationship between humans and the rest of Nature is one of subjugation, domination and plunder, when we need it to be one of harmony and regeneration.

Over the last century there has been paradigm shift in many scientific domains, described by Capra and Mattei as “from seeing the world as a machine to understanding it as a network… from a mechanistic to a holistic and ecological worldview.”

While the body is now understood as a whole system, and we recognise that ecosystems are interconnected and that there are planetary systems which sustain life, our law, economics and politics lag far behind.

For human life to survive, this needs urgently addressing; our law, economics and politics should protect the conditions for continued human life on this planet.

There are emerging movements which have recognised this. Kate Raworth’s Doughnut Economics is an approach to economics which places human activity within planetary boundaries, and the UN’s Harmony with Nature programme recognises ‘a need to devise a more sustainable model for production, consumption and the economy as a whole’ which is ‘based on a non-anthropocentric relationship with Nature’.

In legal thinking, Earth Jurisprudence and the Rights for Nature movement, which this article is based on, have long recognised the need to change our legal systems to ensure a harmonious relationship with Nature. It argues that Nature should be given legal protection with rights, spoken for via human representatives, to be able to exist, persist and regenerate their vital cycles.

This would include a new form of “ownership” which we don’t yet have the language for, in which Nature would effectively own itself, and law would ensure that the relationship between humans and the rest of Nature is just.

This thinking has received some traction around the world, with some rivers (and their ecosystems) being given legal status, and a handful of Latin American countries giving recognition to rights of nature, such as in Ecuador’s constitution or the Bolivian legal system.

Yet there’s a long way to go with raising awareness of these ideas, overcoming the inertia of persuading people of the need for a radically different approach, and then transitioning to legal systems which are based on interconnection and ecological principles.

Our response to the burning of the Amazon cannot simply be about protecting the Amazon from being torched under a fascist regime. Instead, we must recognise that it is just the norm within our legal and economic systems, and that these need addressing urgently.

Humans should be legally required to live sustainably, in the same way that States, Governments and public bodies (though not corporations) are required to respect human rights in all they do. We should do this not because of some hippy idea of loving nature, much as I do, but because our survival depends on it.