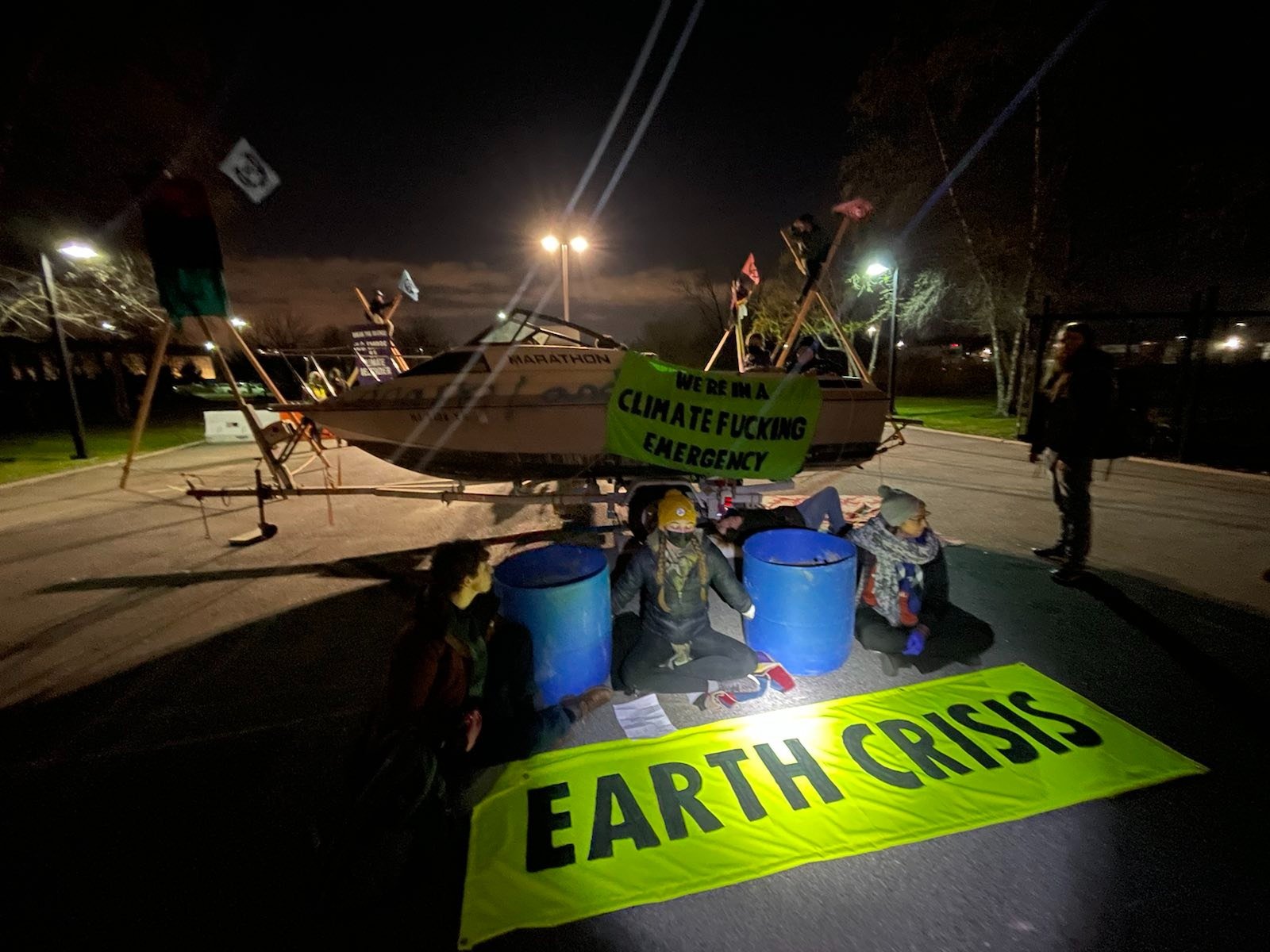 Earth To Media: This Is An Emergency

On Earth (Crisis) Day, activists with the New York City chapter of Extinction Rebellion, the global climate justice movement, took part in a disruption of major corporate media entities including The New York Times Company, News Corp and Gannet. This act of civil disobedience was intended to disrupt the distribution of these corporations’ flagship daily publications: The New York Times, The Wall Street Journal, and USA Today, respectively.

This action follows a long history of non-violent civil disobedience as a tool for societal change, such as sit-ins during the civil rights movement and traffic obstruction by women suffragettes. The purpose of today’s newspaper blockade is to draw the public’s attention to how mass media corporations like News Corp, The New York Times Company, and Gannet are failing to cover the climate emergency with the frequency it deserves, in some cases prioritizing the entertainment of subscribers. Extinction Rebellion stands behind the right to free speech and a free press, and views the breaking of certain concrete mundane laws as a public plea for societal change.

The climate and ecological crisis is already here—destroying people’s homes and livelihoods with extreme weather, droughts, and fire—yet governments and corporations, influenced by mass media corporations, are complacent by continuing to ignore the root causes of the crisis and the dire situation humanity is facing. By failing to cover the climate emergency with the depth and frequency it warrants, the media is enabling the government’s gaslighting of the public—making it easy for the government to act like the climate and ecological crisis is years away, ignore scientists’ urgent calls to action, and refuse to take the steps we need to start transforming our systems from finite and fragile to strong and resilient.

US media corporations need to remember their Paul Revere responsibilities—to awaken, inform, and rouse the people to action. They must be clear about the extreme cascading risks humanity now faces, the injustice this represents, its historic roots, and the urgent need for rapid political, social, and economic change. This includes more front-page coverage of the climate emergency.

The action was targeted at the board of directors and senior management at these institutions who determine what to include and exclude in each publication. Extinction Rebellion respects and recognizes the situation of the individual journalists who work at these corporations, and who will face increasing danger as climate disasters bring more war, violence, and civil unrest globally.

Extinction Rebellion believes in the importance of the media as a check on governments, a crucial source of public information, and a force for societal change when it is warranted. See the organization’s media standards here.

Breaking News: No News Tonight!
On the eve of Earth Day, @XR_NYC activists & indigenous supporters are shutting down the printing distribution site for @nytimes, @nypost, @WSJ, & others. Follow this thread for live updates on the work stoppage. pic.twitter.com/MFjSV0c8Nd

The New York Times (NYT) launched in 2017 a news section dedicated to climate issues and its frequency of coverage surpasses all US newspapers. However, it continues in 2022 to run and even help create advertisements for fossil fuel corporations. By promoting fossil fuels, the company legitimizes fossil fuel corporate greenwashing and gives them a social license to operate. This is contradictory alongside findings of their journalism that clearly indicate that the fossil fuel industry has been lying to the American public for decades and that nations must drop fossil fuels fast.

In 1999, NYT decided to stop running tobacco ads because, in their words, “we don’t want to expose our readers to advertising that may be dangerous to their health.” Studies have proven that climate change is the single biggest health threat facing humanity. If NYT recognized the health risks associated with tobacco, it should certainly stop writing and running ads for companies involved in the extraction or sale of fossil fuels. This is an opportunity for NYT to be the first US paper to lead the journalistic transition to net-zero—making itself more attractive to readers now and for decades to come.

The Wall Street Journal (WSJ) is considered by many as the preeminent newspaper for business and economics, whose perspectives and opinions have direct effects on the everyday lives of the citizens of the United States and beyond. In a country whose identity is based on economic growth and entrepreneurship, the WSJ has more impact than most realize, influencing everything from politics to culture, from the tech industry to the defense industry.

Yet the Wall Street Journal—and its parent company News Corp—continue platforming rhetoric and discourse that denies the scale and cause of the climate crisis, instead hiding behind the “Opinions” section to platform and perpetuate climate denialism. This is perhaps ****because infinite economic growth and consumption of natural resources is at the heart of the climate and ecological crisis. The WSJ and News Corp can’t admit and duly report on the damaging effects of climate change, as this would require admission that the system of consumerism and focus on GDP and Wall Street earnings is part of the problem. The corporate world continues to promote the idea that we can collectively keep living the way we have, and still have a viable future. It continues to circulate “ideas” that the free market will save us, that the right technology is just around the corner, and that it’s everyone else’s problem but the United States.

USA Today  ranks the lowest in frequency of climate coverage amongst all major US newpapers. ******Not so long ago, in 2015, their editoral board published an impassioned defense of ExxonMobil’s “right to its opinion” stating in their official view that “ExxonMobil’s history of climate denial is not a reason for prosecution” and justifying their position, in part, with a craven appeal to concerns about free speech. At a time when the science could not be clearer, USA Today must stop embracing climate denialism and start reporting the facts.