Above Photo: “When we all speak together with a single voice of resistance, our power grows—and so do our chances of defeating the Trump administration,” said Taylor McKinnon of the Center for Biological Diversity. (Photo: Lori Shaull/flickr/cc)

Under the banner of #Earth2Trump, a campaign to resist the upcoming administration’s “dangerous agenda” is gearing up to take its message nationwide.

The “resistance roadshow,” spearheaded by the conservation organization Center for Biological Diversity, kicks off Jan. 2, 2017 in Oakland, Calif. and Seattle, and will bring speakers and musicians to 13 other cities before ending on Jan. 20—inauguration day—in Washington, D.C.. It’s aimed at “rallying and empowering defenders of civil rights and the environment” to galvanize a network of resistance.

The call-to-action states: “We must stand and oppose every Trump policy that hurts wildlife; poisons our air and water; destroys our climate; promotes racism, misogyny or homophobia; and marginalizes entire segments of our society.”

The call to resist such attacks are well-founded, given that, among other things, Donald Trump has made clear that reproductive rights are threatened, filled his cabinet with climate science deniers, undertaken what appears to be a climate “witch hunt” at the Energy Department, put forth an anti-worker, fast-food executive for labor secretary, called for a U.S.-Mexico border wall, called for a Muslim database, and made sexist comments.

“When we all speak together with a single voice of resistance, our power grows—and so do our chances of defeating the Trump administration,” said Taylor McKinnon, an organizer with the Center. 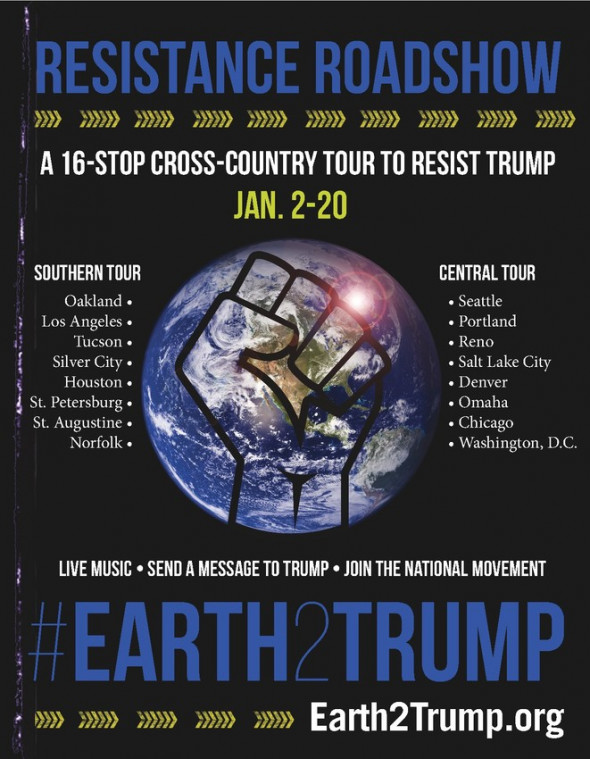 Organizers are also encouraging people to sign a “pledge of resistance.” The president-elect, the pledge states, “is an unprecedented threat to our nation’s democracy, health, and environment. He must not be allowed to dismantle the Environmental Protection Agency, gut the Clean Air and Endangered Species acts, raid our public lands, eliminate regulations protecting poor communities from pollution, deport millions of people, take away our reproductive freedom, or force millions to live in fear.”

Signatories vow to “stand in resistance to Donald Trump’s assault on America’s clean air, clean water, climate, wildlife, civil rights, reproductive rights, gender and racial equality, and freedom of speech and religion. They will do so by taking action, whether by attending rallies, educating their community members, or maintaining “a compassionate, loving heart while fighting fiercely for the values [they] cherish most.”

Follow the events as they unfold with the hashtag #Earth2Trump, and click here to find a roadshow stop near you.
#Earth2Trump Tweets