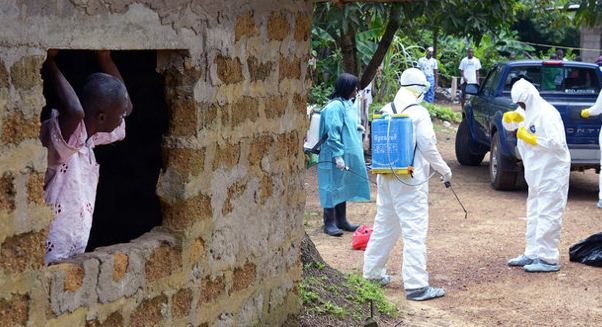 A neighbor of an Ebola virus victim looks at medical workers of the Liberian Red Cross carry his body on Sept. 4, 2014 in the small city of Banjol, 30 kilometres of Monrovia, Libera. Dominique Faget/AFP/Getty

The outbreak of Ebola that is affecting parts of Africa is the worst ever seen. The cumulative number of cases stands at nearly 4,000, with 2,000 of those resulting in death — figures that surpass the numbers seen in all previous outbreaks combined. This is an unforgiving virus that shows no mercy. To date, nearly 300 medical staff have been infected, and around half of them have died.

The three hardest-hit countries, where cases now number in the thousands and where the capital cities are affected, are in West Africa: Guinea, Liberia, and Sierra Leone. These countries, which have just emerged from years of civil war, are among the poorest in the world. The World Health Organization (WHO) estimates that the three countries have only one to two doctors per 100,000 people. Guinea’s neighbor, Senegal, connected by an extremely porous border, has also announced a case of Ebola.

Nigeria has reported a small number of cases — first in Lagos and now in Port Harcourt, the country’s oil and natural gas hub. An assessment by Nigerian health staff and WHO epidemiologists reveals a situation there with great potential to explode, both in terms of cases and volatile social unrest. Military escorts are needed for movements into the Ebola isolation and treatment center.

This fast-moving outbreak has a number of unprecedented features and is delivering one surprise after another.

What we see is this: Decimated families and communities, abandoned villages, food and fuel shortages, uncollected bodies, two thousand fresh and recent graves, a rising number of orphans, and hospitals overflowing or shut down entirely.

In some areas, no health services whatsoever are functioning — not for malaria, or tuberculosis, or HIV. That also includes childhood diarrheal disease and pneumonia, and even safe childbirth. No health services for anything.

At the same time, fewer and fewer medical graduates are choosing family medicine as their specialty. In the absence of family physicians and primary care services as “gate-keepers,” patients tend to flood emergency rooms, even for routine care.

The ramifications extend far beyond the health sector. As the economists tell us: Revenues are down. Foreign exchange levels are down. Markets are not functioning. Airlines and ships are not coming in. Development projects are being cancelled, and business people have left the region.

As we look at what this virus has done to affected parts of West Africa, every country in the world wants to keep the Ebola virus out of its borders. The whole world is watching what happens. What does this outbreak, which has been making headlines for months, tell us about the state of the world at large? What does it tell world leaders, and the citizens who elect them, about the state and status of public health?

First, the outbreak spotlights the dangers of the world’s growing social and economic inequalities. The rich get the best care. The poor are left to die.

Second, rumours and panic are spreading even faster than the virus. Ebola sparks nearly universal fear. Fear vastly amplifies social disruption and economic losses well beyond the outbreak zones. The World Bank estimates that the vast majority of economic losses during any outbreak arise from the uncoordinated and irrational efforts of the public to avoid infection.

Third, when a deadly and dreaded virus hits the destitute and spirals out of control, the whole world is put at risk. Our 21st-century societies are interconnected, interdependent, and electronically wired together as never before. We see this particularly with the very dangerous outbreak in Nigeria’s oil and natural gas hub. Nigeria is the world’s fourth largest oil producer and second largest supplier of natural gas. The outbreak in the country’s energy hub can potentially dampen economic outlooks worldwide.

Fourth, decades of neglect of fundamental health systems and services mean that a shock — like a disease run wild or climate change — can bring a country to its knees. You cannot build these systems up during a crisis. Instead, they collapse. And a dysfunctional health system means zero population resilience.

Fifth (and I feel very strongly about this): Ebola emerged nearly 40 years ago. Why are clinicians still empty-handed, with no vaccine or cure?

Because Ebola has been, historically, geographically confined to poor African nations. The research and development incentive is virtually nonexistent. A profit-driven industry does not invest in products for markets that cannot pay. We have been trying to make this issue visible for ages. Now people see it clearly and dramatically, in the daily headlines and TV news.

Finally, the world is ill-prepared to respond to any severe, sustained, and threatening public health emergency. This was the conclusion reached by a panel of experts commissioned to review events during the 2009 influenza pandemic and distill lessons for the future.

With Ebola, that prediction has come true. The world must stop watching and start acting — on an enormously larger scale.

Dr. Margaret Chan is the director-general of the World Health Organization.