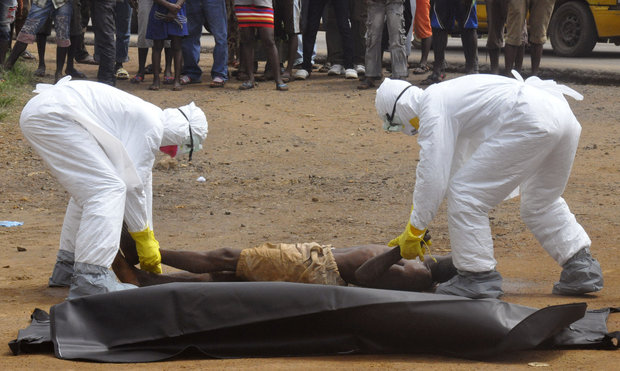 Above: Health workers place the body of a man, inside a plastic body bag, as he is suspected of dying due to the Ebola virus whilst a small crowd watch in Monrovia, Liberia,Sept. 4, 2014. (AP Photo/Abbas Dulleh).

Cuba Sees a Crisis, and Sends Docs; The US Sees an Opportunity and Sends Troops

How’s this for a juxtaposition on how nations respond to a global health catastrophe. Check out these two headlines from yesterday’s news:

Reading these stories, which ran in, respectively, the BBC and Reuters, one learns that the Cuban government, which runs a small financially hobbled island nation of 11 million people, with a national budget of $50 billion, Gross Domestic Product of 121 billion and per capita GDP of just over $10,000, is dispatching 165 medical personnel to Africa to regions where there are ebola outbreaks, while the US, the world’s wealthiest nation, with a population of close to 320 million, a national budget of $3.77 trillion, GDP of $17 trillion, and per capita GDP of over $53,000, is sending troops — $3000 of them– to “fight” the ebola epidemic.

Okay, I understand that these troops are supposedly going to be “overseeing” construction of treatment centers, but let’s get serious. With an epidemic raging through Africa, where some of the poorest nations in the world are located, what is needed right now are not new structures. Tent facilities would be fine for treating people in this kind of a crisis. What is needed is medical personnel. The important line in the Reuters article about the US “aid” plan, though is that the US troops will

“The goal here is to search American expertise, including our military, logistics and command and control expertise, to try and control this outbreak at its source in west Africa,” Lisa Monaco, Obama’s White House counter-terrorism adviser, told MSNBC television on Tuesday ahead of the announcement.

Cuba apparently does not feel that it needs to establish a military control center to dispatch its doctors and nurses, nor does it feel that “military, logistics and command and control expertise” are what are needed.

Anyone who thinks this dispatching of US military personnel to Africa is about combating a plague is living in a fantasy world. This is about projecting US military power further into Africa, which has already been a goal of the Obama administration, anxious to prevent China from gaining control over African mineral resources, and to control them for US exploitation.

Ebola, to the US, is both an opportunity to gain a bigger foothold in Africa, and a danger, in terms of the disease spreading to the US.

Cuba, whose population does not include many tourists, and which is not a destination for many African visitors, either, is sending its medical personnel to Africa not to gain control of Africa’s resources, or to help it establish trade relations with Africa. It has no interest or hope of becoming a major player in the global contest for influence the way the US, China or Germany might. It is sending its medical personnel because they are needed, much as it did almost immediately following the earthquake in Haiti, where the US also responded not with medical aid but with troops. (The US Navy was dispatched, after considerable delay, and when US forces finally arrived, they found some 300 Cuban doctors and nurses who had already managed to reopen the undamaged portion of a Port-au-Prince Hospital and to set up tent hospitals, before the first US doctor even set foot in Haiti.)

This latest international crisis, which promises to worsen as the ebola virus spreads further in Africa and, inevitably, moves to other continents, highlights the twisted nature of the United States, which increasingly sees all international issues through a military lens, and every crisis as requiring a military response.

The kindest way to look at this would be to say that the US medical “system,” if it can even be called anything so organized, is so badly funded and so based upon the profit motive, that it is incapable of dispatching hundreds of skilled doctors to Africa to help fight the ravages of a plague like ebola. People in the US are seriously underserved by primary care physicians, the very doctors who are needed when it comes to combating the spread of disease. Instead, we in the US have all kinds of high-priced specialists in everything from dermatology and liposuction to cancer specialists who help us combat the diseases caused by our increasingly toxic environment and our chemical-laced foods.

Cuba, on the other hand, despite the nation’s poverty (the result, primarily, of over a half century embargo enforced by the US ever since a leftist rebel movement led by Fidel Castro ousted the colonial government of Fulgencio Batista), has a first-rate medical system composed mostly of those very primary care physicians now needed so badly in Africa.