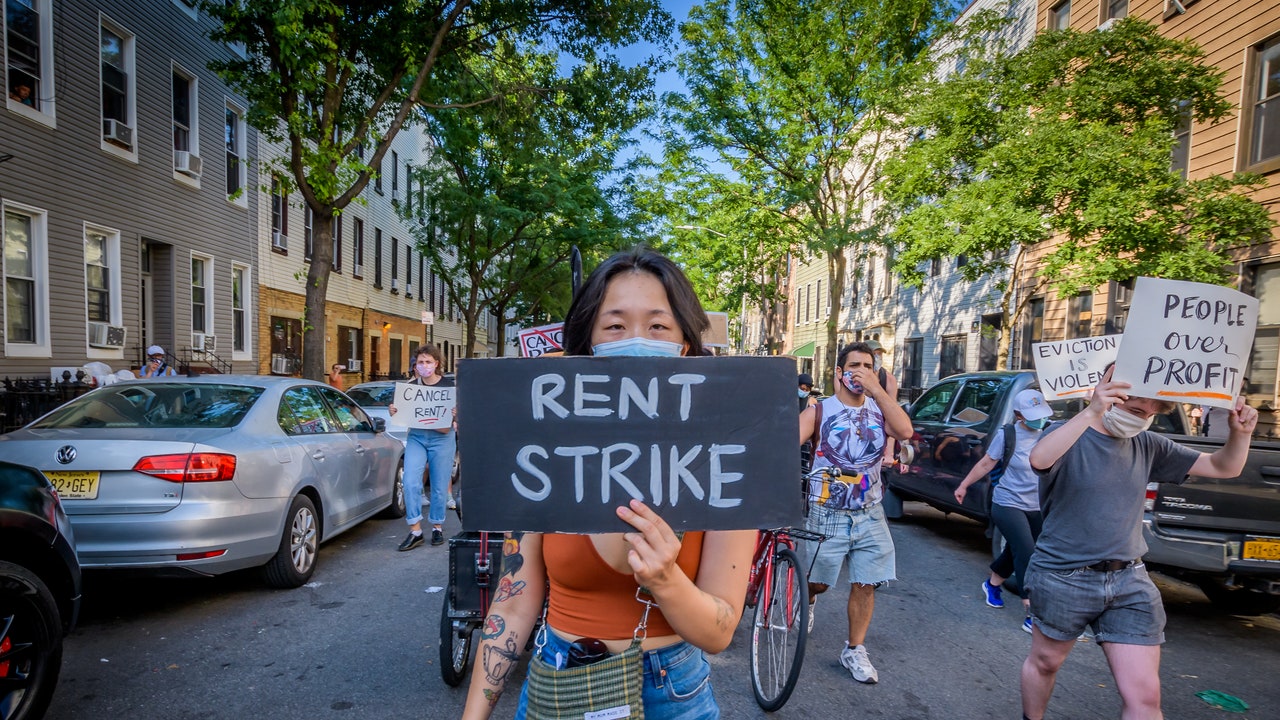 Economic Disobedience: What Is It And How Does It Work?

As the COVID-19 pandemic brought the global economy to a standstill in March 2020, a peculiar trend popped up in multiple cities: People started hanging white sheets out of their windows.

With April rent coming due alongside record unemployment numbers, the white flags became a protest symbol for struggling tenants on the verge of a rent strike. The symbol spread online and eventually showed up in Chicago, Brooklyn, and New Orleans, according to reporting from CNN. The rent crisis also led to a rise in tenant unions, with tenants-turned-housing-activists in Oakland and San Francisco successfully organizing multi-month rent strikes that resulted in impressive wins.

Despite the threat of eviction and potential economic and legal fallout, ordinary people, acting out of necessity, engaged in a collective act of defiance. It was one of the most visible recent examples of a type of organizing with deep historic roots in the U.S. and around the world: economic disobedience.

So, What Is Economic Disobedience?

Civil disobedience refers to deliberately disobeying or breaking certain laws in an act of protest, while economic disobedience is deliberately disobeying or breaking economic obligations in an act of protest. The tactic of getting together to withhold payment empowers people to win economic victories that would be impossible to win alone.

The strategy is most commonly levied in relation to debt, whether that’s rent or mortgage debt, medical debt, or student debt. Proponents of economic disobedience often argue that individual debt can leave people mired in shame, but collectivized debt can actually be a source of power. If hundreds or even millions of people come together and refuse to pay debts they cannot afford, they can gain leverage against big banks, powerful creditors, or corporate landlords.

Rent strikes have a long history in the United States and around the world. One of the most iconic rent strikes started on December 26, 1907, in New York City, led by 16-year-old Pauline Newman. In the midst of high unemployment and poverty rates, roughly 10,000 families in lower Manhattan withheld their rent for two weeks to protest rising rent costs. Historians credit the coordinated effort as the spark that fueled later tenant activism that resulted in the rent control measures that are today considered standard in New York City.

Another wave of major rent strikes took place in Harlem across the 1960s, with Black tenants protesting housing discrimination, poor living conditions, lack of upkeep, and a lack of access to affordable housing. St. Louis’s historic 1969 rent strike had similar race- and class-based beginnings, with Black tenants protesting living conditions and a lack of upkeep in the city’s public housing units. Supported by the local Teamsters Union, the Black Arts Group, the Black Liberators, the Legal Aid Society of St. Louis, and others, the tenants successfully withheld more than $600,000 — that’s $4.5 million today — in rent over nine months. In the end, the city of St. Louis agreed to the tenants’ demands, including establishing income-based rent for people who live in public housing.

Refusing To Collect Or Pay For Public Transportation

Another example of economic disobedience is a fare strike, or refusing to pay for public transportation. Interestingly, fare strikes can be leveraged by riders when they refuse to pay and workers and drivers who refuse to collect fares.

According to some sources, one of the earliest instances of a recorded fare strike dates back to 1944, when streetcar workers in Cleveland threatened to refuse to collect fares as part of a labor dispute with the city. The state of Michigan reportedly had its first fare strike in 2016, in Grand Rapids, also as part of a labor dispute, when a group of students and community members held a one-day fare strike in solidarity with the city’s unionized bus drivers who had been in negotiations with the city for more than a year.

As the country’s most-used and second-oldest public transportation system, New York’s Metropolitan Transportation Authority (MTA) has been the target of a fare strike more than once. The headline-making January 2020 FTP3 protests against the MTA were the third iteration of protests organized in response to subway fare hikes and allegations of racial profiling and hyper-policing on New York City subways. The 2020 protests were spurred by several widely shared videos of police officers brutalizing Black teenagers for minor offenses.

The FTP movement used a range of protest tactics, but its equivalent to a fare strike included jumping turnstiles and deliberately rendering MetroCard machines inoperable. The Occupy Wall Street movement also enacted fare strikes against the MTA, using chains to hold the subway gates open at more than 20 stations so that riders could enter the subway free of charge.

Going On A Debt Strike Over Student Loans

The collective, which has roots in the Strike Debt collective formed out of Occupy Wall Street, is a debtors’ union that fights for the cancellation and eradication of all “unjust debt.” In recent years, the group has risen to prominence as a driving force in the movement to cancel student debt, but the Debt Collective also devotes energy to getting rid of other kinds of debt, including medical debt, probation debt, credit card, and payday loan debt.

“Debtor organizing fights against predatory financial contracts and for the universal provision of public goods, including health care, education, housing, and retirement, so that people don’t have to go into debt to access them,” writes Debt Collective cofounder Astra Taylor in the foreword to the group’s book, Can’t Pay, Won’t Pay. “These public goods and their access must be structured in ways that remedy long-standing and ongoing social inequalities. The Debt Collective believes that it is not enough for public goods and social services to be universal, they must be reparative, too.”

On February 7, 2020, the Debt Collective launched a student debt strike on the University of California at Los Angeles campus, encouraging student debtors to collectively characterize their requests for deferrals into a coordinated loan repayment strike. Months later, pandemic-related shutdowns began wreaking havoc on the economic stability of millions, and the U.S. government established a moratorium on federal student loan payments. During the two-plus years that these payments have been paused, there’s been increased interest in organizing a nationwide student debt strike, and in March — before the pause was extended yet again, to August 31 — the Debt Collective responded with a call for a national student debt strike.

Some argue that true economic disobedience in response to debt would be participating in an organized, collective mass default. Instead, the Debt Collective advises student debtors to strike by legally reducing their monthly payments to $0, or as close to $0 as possible, rather than simply defaulting on their loans, which can have severe financial consequences. As the collective notes in its book, the group does not “advise financial suicide, but coordinated and strategic campaigns of resistance. An individual default is not a debt strike.”

Compared with traditional rent strikes and fare strikes, where people are technically breaking the law, the Debt Collective’s version of a debt strike is committed to keeping people from experiencing the potential consequences of defaulting on a loan, such as permanently damaged credit scores, debtor’s wages garnished by the government, or putting a debtor’s social security benefits in jeopardy.

From the Boston Tea Party in 1773 to Shay’s Rebellion in 1786, patriotic lore paints protesting taxes as a particularly American brand of economic disobedience. War tax resisters have long used this kind of economic disobedience by withholding some or all of their federal taxes to protest general military spending, wars, and other kinds of U.S. military intervention. Poet Henry David Thoreau famously refused to pay federal taxes for six years — and spent a night in jail for it — in protest of chattel slavery and the Mexican-American War. The Quaker community is also well-known for using this tactic.

The anti-war movement during the Vietnam War inspired a notable surge of war tax resistance in the 1960s and ’70s. In 1968, hundreds of writers and editors participated in the Writers and Editors War Tax Protest. Signatories included such celebrated authors as James Baldwin, Gloria Steinem, Susan Sontag, Noam Chomsky, Howard Zinn, Adrienne Rich, Allen Ginsberg, Betty Friedan, Hunter S. Thompson, and Kurt Vonnegut Jr. A new organization, called the War Tax Resistance, was founded the next year, in 1969, as a newer offshoot of the veteran War Resisters League, and had expanded to 192 chapters nationwide by 1972.

Tax resistance as a form of economic disobedience has continued through the years. The tactic got renewed attention during the Iraq War and again during the Donald Trump administration, in protest of his presidency.

“If the alternative is to keep all unjust men in prison, or give up war and slavery, the State will not hesitate which to choose,” Thoreau wrote in his famous essay, “Civil Disobedience.” “If a thousand men were not to pay their tax bills this year, that would not be a violent and bloody measure, as it would be to pay them and enable the State to commit violence and shed innocent blood. This is, in fact, the definition of a peaceable revolution, if any such is possible.”