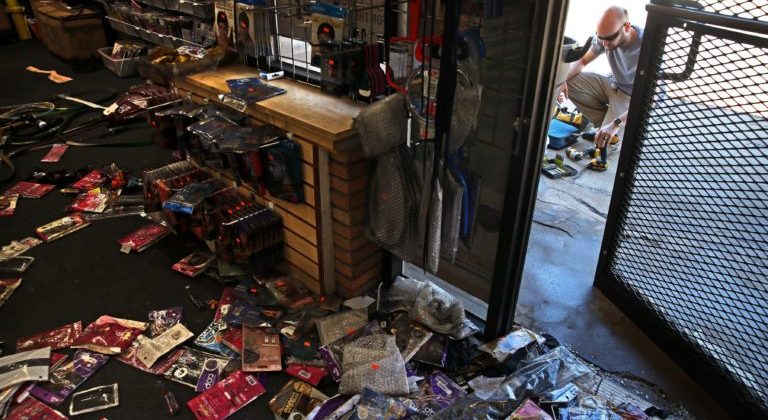 Above photo: Ferguson resident Andrew Davis gathers his tools as he volunteers boarding up broken windows Sunday, May 31, 2020, at Beauty World beauty supply in Ferguson, Mo. The store was one of several damaged during protests over the death of George Floyd on May 25. Christian Gooden/St. Louis Post-Dispatch via AP.

NOTE: The purpose of protests is to disrupt the system, but sometimes the impacts are broader than we know. This article from an insurance industry outlet shows the extent of property damage across the United States after police murdered George Floyd and the potential difficulties major retailers may have being able to purchase property insurance. It finds the amount of property destruction is unprecedented, which is a sign of how much outrage presently exists. – MF

The civil disturbance that started in Minneapolis after the killing by police of George Floyd spread to 20 other states — an unprecedented property insurance catastrophe that will likely impact policy renewals and could even persuade some insurers to exclude coverage for damage caused by riots, executives for Verisk’s Property Claim Services said.

“In the U.S., there has been no precedent for a riot catastrophe like this,” Tom Johansmeyer, head of PCS, said during a telephone interview with the Claims Journal on Thursday.

Johansmeyer offered no prediction about total damages, other than to repeat a previous report that losses will exceed the $25 million “catastrophe” level. But he did say that this year’s civil disturbance was the first ever to cause substantial property losses in more than one state. That breadth of damage is bound to affect the thinking of property underwriters, especially those who insure large national retailers. He said up to now, insurers have thought of rioting as a local risk that can be controlled by building a geographically diverse book of business.

Janet Ruiz, director strategic communications for the Insurance Information Institute, offered more detail. She said riot losses will surpass the previous record for civil unrest damages that was set in 1992 from rioting that erupted during protests after a jury acquitted police officers who had been videotaped beating Rodney King. PCS said insured losses from that event reached $775 million, or about $1.4 billion in 2020 dollars, according to the Insurance Information Institute.

“This will be a bigger event than the LA riots given the volume of locations that had losses around the country,” Ruiz said. “It’s shaping up to look like it could be in the hundreds of millions. The insurance industry is prepared financially to handle these claims.” 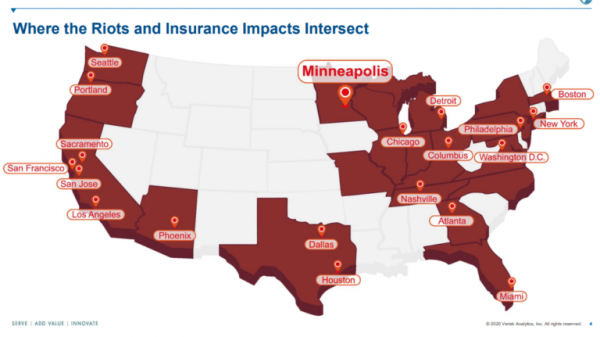 “It will certainly be on the minds of property underwriters,” Johansmeyer said. “You do not talk about losses from big riots and not talk about them when it comes to renewal.”

Historically U.S. riot catastrophes have caused relatively low insured losses, PCS said in a previous report. The 2015 rioting in Baltimore was the last civil disorder event that PCS designated as a “catastrophe,” meaning it resulted in damages of more than $25 million.

PCS said shortly after rioting erupted in Minneapolis that damages there could reach $25 million in Minnesota alone. The company has not yet updated the total amount of estimated insured losses. Johansmeyer noted that his company sells information to subscribers — besides, PCS isn’t in the forecasting business.

“There is a fair amount of loss to be had here,” he offered, when asked what the total insured loss might be.

Johansmeyer said the total amount of the loss isn’t the real story anyway.

“It’s the large retailer losses in particular that could change the character of this,” he said. “The dynamics of the retailer space are just profoundly different than what you had seen in the 1992 riots.”

Johansmeyer said national retailers were not truly national 30 years ago. He said he never saw a Target store or WalMart when he was growing up in Boston. Now those stores are ubiquitous.

He said one has to look back to the 2019 civil unrest that spread throughout the South American nation of Chile late last year to find property damages of similar scope. Rioting set off during protests over the cost of living and income inequality caused $2 billion in damages, and 40 percent of that was incurred by large, multinational retailers. In fact, PCS said 20 percent of the loss came from a single retailer, he said.

Johansmeyer said said one of those retailers in Chile was not able to find coverage for damage caused by strikes, riots and civil unrest when it renewed its property policy. He said it had to go the political violence market for coverage.

He said it’s too soon to know if that will be the result of the U.S. civil unrest.

“We are aware that a couple of large retailers have put in large-loss advisories,” Johansmeyer said.

“Not every loss was a large loss or total loss of a building,” Gregory said. “There are a lot of smaller losses out there as well.”