Take Action To End The Economic War At Home And Abroad

Webinar, Wednesday, Feb. 3 at 4:00 pm Eastern/1:00 pm Pacific. “The People’s Struggles and the Emerging Situation in the United States.” Hear from Vijay Prashad, Ajamu Baraka, Sara Flounders, Joe Lombardo and Margaret Flowers. Sponsored by the US Peace Council and the Committee for International Solidarity and Struggle for Peace (COSI-Venezuela). REGISTER: Bit.ly/PeoplesStruggles.

In case you missed it:

Watch the webinar: “COVID-19: How Weaponizing Disease and Vaccine Wars are Failing Us” featuring Lee Siu-Hin, Margaret Kimberley, Max Blumenthal, and Vijay Prashad with moderators Sara Flounders and Margaret Flowers organized by the editors and authors of “Capitalism on a Ventilator: The Impact of COVID-19 in China and the US.”

Watch the webinar: “A New Cold War Against China Is Against the Interests of Humanity.” This was hosted by The Tricontinental, the Simon Bolivar Institute, ALBA Movement and No Cold War and it features Alicia Castro (Argentina), Joao Pedro Stedile (Brazil), Ricardo Menendez (Venezuela), Monica Bruckman (Peru/Brazil) and Ambassador Li Baorong (China). 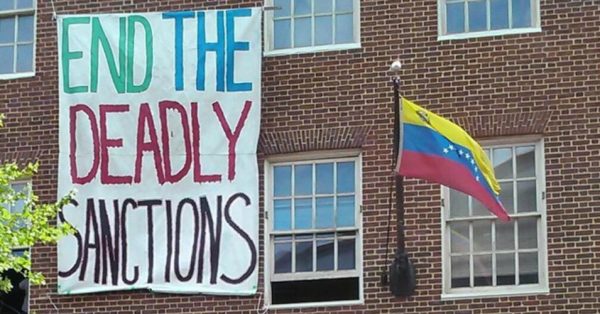 The new Biden administration opened the door to a review of the sanctions being imposed by the United States on one-third of the global population in its National Security Directive.

(c)  COVID-19 Sanctions Relief. The Secretary of State, the Secretary of the Treasury, and the Secretary of Commerce, in consultation with the Secretary of HHS and the Administrator of USAID, shall promptly review existing United States and multilateral financial and economic sanctions to evaluate whether they are unduly hindering responses to the COVID-19 pandemic, and provide recommendations to the President, through the APNSA and the COVID-19 Response Coordinator, for any changes in approach.

Of course, there is plenty of wiggle room in this paragraph for government bodies to not change anything. For example, who defines “unduly”? They could find that sanctions hinder the responses to the pandemic, but do not reach the level of “unduly hindering.” This is how government speak works. But it does open a door for people to demand an end to sanctions.

The Sanctions Kill coalition launched a petition over the weekend that sends emails to the White House and Congressional leaders calling for them to end the economic war. CLICK HERE TO SIGN THE PETITION.

Sanctions are an issue, like net neutrality, that sounds boring and legalistic, until you understand what they actually are, the harm they do and how they impact you personally. The economic war being waged in 39 countries is killing tens, if not hundreds, of thousands of people each year. The economic wars being waged abroad and against the population in the United States share the same root causes. It is essential to understand this so we can struggle together to end them and create a better future. 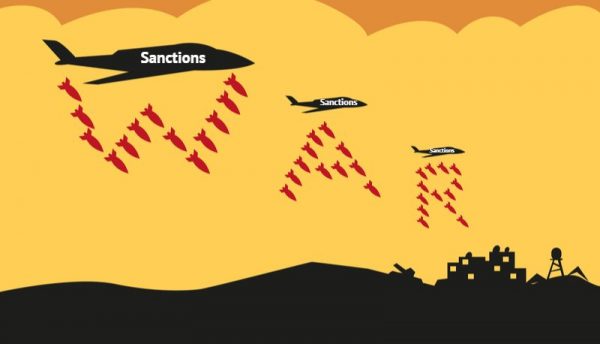 The United States and international bodies have used economic sanctions for over a hundred years as a tool to influence the behavior of nations and other entities. Sanctions include restricting trade with the targeted country, blocking financial transactions, freezing assets, reducing foreign aid, banning travel and more. They have long been viewed as an acceptable alternative to military invasion, but they are just as deadly. Initially, they were used sparingly during wartime and with the approval of the League of Nations and later the United Nations.

In 1917, the Trading with the Enemy Act gave the US president the power to use sanctions during peace time and even within the United States. This is how President Franklin Delano Roosevelt issued a bank holiday to stop all transactions in 1933 during the Great Depression.

Sanctions were imposed against Cuba in 1958 when it overthrew Batista and became a socialist country and against Iran in 1979 when it ousted the US-backed Shah. Instead of being used to prevent wars, as was the initial intention, sanctions became a way for the United States and other colonial nations to retaliate against and control other countries.

In the 1970’s, sanctions became a tool to “make the economy scream” and overthrow socialist governments. This tactic was used in Chile to create internal disruption through what President Allende called an “invisible blockade.” The United States restricted credit from banks, trade and foreign assistance, which weakened the economy and led to hyperinflation. The economic fallout and unrest were used to demonize President Allende and set the stage for the successful US-backed coup against him on September 11, 1973.

In 1977, Congress passed the International Emergency Economic Powers Act (IEEPA), which was supposed to prohibit the use of sanctions during peace time. This was designed to end the president’s ability to unilaterally impose sanctions on a country, but instead through subsequent reforms it actually increased the president’s power. And, starting in the 1990’s, there has been a dramatic increase in the number of countries being targeted with sanctions to 39. One-third of them are African nations.

The sanctions being imposed by the United States are illegal under international law. Rather than being enforced through a process in a body like the United Nations, where they must be justified as a response to a country’s violation of the law, the US imposes sanctions unilaterally and without justification. The US will sometimes manufacture reasons such as making false accusations of drug trafficking, human rights abuses or terrorist activity.

The fact that sanctions imposed by the US fall outside of international bodies and are imposed with the goal of serving US foreign political interests makes them unilateral coercive economic measures, which violate the United Nations Charter, a number of international treaties and even the United States Constitution’s Supremacy Clause. That US-imposed sanctions are illegal is rarely mentioned. 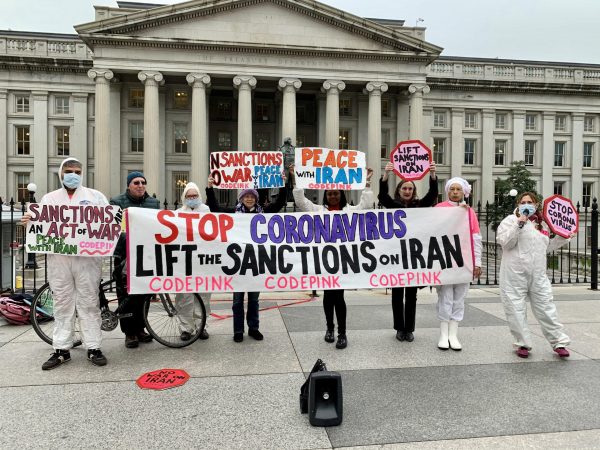 When the COVID-19 pandemic hit in early 2020, the United Nations called for an end to all sanctions because they prevent countries from importing medicines, medical equipment, food and other basic necessities for health. A group of developing nations, the G77 and China, also called for an end to unilateral coercive economic measures. Instead, the Trump administration escalated the measures, particularly as part of its ‘maximum pressure’ campaign against Iran, Syria and Venezuela.

Sanctions are economic war. They are just as deadly as war and potentially more deadly, but they are a less visible cause of death. A study by the Center for Economic and Policy Research found that the US’ coercive economic measures in Venezuela contributed to the death of more than 40,000 people in 2017-2018. Another study found US sanctions caused the death of nearly 4,000 North Koreans in 2018, the vast majority being pregnant women and children. And sanctions imposed on Iraq in the lead up to the war killed 500,000 or more children under five.

Sanctions have robbed nations, particularly those in the Global South, of billions of dollars. During the Trump administration, sanctions imposed on Cuba resulted in a $20 billion economic loss. In the three years after the United States declared Venezuela a national security threat in 2015, Venezuela lost $38 billion. Currently, US sanctions are preventing Venezuela from buying vaccines through the World Health Organization’s COVAX program designed to aid Global South countries. The Bank of England is also withholding over $1 billion of Venezuela’s gold that is going to be used to purchase food and medicine through a United Nations program.

This economic war hits at home too. It harms the US economy by restricting trade with other countries. It prevents scientists in the US from collaborating with scientists in other nations and blocks people in the US from benefiting from innovation developed abroad. US sanctions create insecurity around the world and drive anti-US sentiment. They also create conditions that drive migration. Instead of understanding the role the US plays in creating the hardship and violence in targeted countries that drive migration, immigrants are used as scapegoats for the economic insecurity experienced by people in the US. This divides workers against each other while the wealthy elites profit from US imperialism and exploitation of workers at home.

It is the same neoliberal economic system, white supremacy and disregard for human life that underlie sanctions abroad and at home. The current recession and pandemic have exposed this in a brutal way in the United States. The populations that are harmed the most are Indigenous peoples and communities of color. The United States government could have taken the effective steps of cancelling rent and debt, providing a monthly income and nationalizing healthcare that other countries took but instead passed laws that funneled wealth to the top while providing minimal relief to the majority. 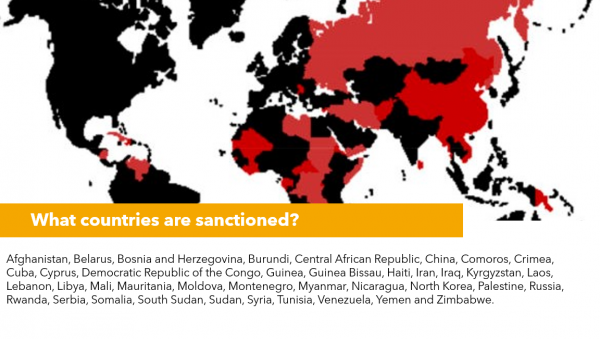 It is essential going forward that we take actions to end the economic war at home and abroad. Although we have a specific responsibility as citizens of empire to pressure the US government, we are stronger when we act in solidarity with peoples in targeted nations. We have much to learn from those who have been resisting US Empire and economic warfare for decades.

The Sanctions Kill coalition, which started in late 2019, is working to build that solidarity and provide resources to activists. It has held a number of educational webinars, which you’ll find at the bottom of the Home Page. The coalition also has a new petition to the Biden administration calling for an end to the sanctions. CLICK HERE TO SIGN IT.

And the Sanctions Kill campaign has a new toolkit you can use to understand what sanctions are, how they impact people and what to do about them. It consists of a slide show and a sample script so anyone can give a presentation to their organization, group or community. This is a way to educate people about the ways sanctions violate the law and human rights of people everywhere and to grow the movement for People(s)-Centered Human Rights.

It is through grassroots struggle and mass mobilization that we will achieve the transformative changes that we all require to live a life of dignity in which our basic necessities are met. As US Empire falls and the government fails to even protect the lives of its own people, this struggle is of the utmost importance.