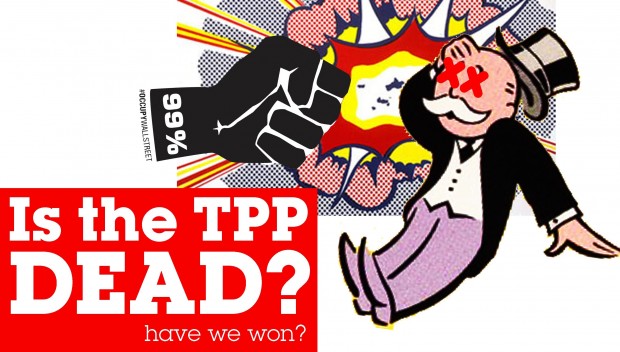 TPP Too Big To Succeed? Public Opposition Joins In Weighing the TPP Down

Note: The chief economist of The Economist – a pro-trade publication, Simon Baptistis, is pronouncing that theTPP is dead. We don’t agree, while we are pleased to see supporters viewing the TPP as dead because of unsolveable disputes between nations, we see things differently. Mackenzie McDonald Wilkins a trade and climate organizer who works with us put it well in an email discussing this article:

This reminds me of when people thought Fast Track was dead a few days before it was passed. Everything that I have heard suggests that negotiators are gearing up for another round as soon as possible and that they will likely, but not surely, try to squeeze the deal in before US elections get too hot and after Canadian elections in October. I also think the author is misinformed when suggesting that the big multinationals are not fighting for this tooth and nail when we just saw them donate hundreds of millions of dollars to pass Fast Track. They know how central this is to their ability to continue their economic domination but they certainly don’t want this public so one of our roles is to raise the issue in every way possible including in election season!

Hopefully we will be able to get together mass action this fall to push TPP to the tipping point where we can actually stop the world’s most powerful corporations in their tracks and put forward an alternative model of global politics and economy!

Something not mentioned in the article below is another factor: in every country where the TPP is being negotiated there is intense and growing opposition. This makes it very difficult for elected officials and trade negotiators to compromise their economy in order to get an agreement. Every leak provides fodder for growing the opposition and if the TPP is ever made public we will have a tremendous opportunity to dramatically escalate opposition. It is critical that the people continue to increase the  pressure on politicians to ensure the TPP is unable to be completed.

The US is using the TPP in order to surround China economically. Japan is a key ally in the Asian Pivot of the military surrounding Japan. This political agenda makes the TPP even more complicated. The people of the United States need to be protesting the Asian Pivot and demanding that their government work with China, not seek conflict with it. This means stopping the Asian Pivot and the TPP.  KZ

The chief economist of The Economist magazine, Simon Baptist, believes that the Trans-Pacific Partnership (TPP) trade deal is dead following the failure of final round negotiations in Hawaii last week. Here’s Baptist’s latest commentary on the TPP from his latest email newsletter:

The latest talks on the Trans-Pacific Partnership (TPP) did not end well and election timetables in Canada and the US mean that the prospect of a deal being ratified before the end of 2016 (at the earliest) is remote. The usual problem of agricultural markets was prominent, headlined by Canada’s refusal to open its dairy sector. For New Zealand—one of the four founder countries of the TPP, along with Brunei, Chile and Singapore—this was a non-negotiable issue. Dairy was not the only problem. As usual, Japan was worried about cars and rice, and the US about patent protection for its pharma companies.

The TPP was probably doomed when the US joined, and certainly when Japan did. It then became more of a political project than an economic one. Big trade agreements had hitherto focused on physical goods, while the TPP had an aim of forging rules of trade beyond this in intellectual property, investment and services. China was a notable absence, and the US and Japan, in particular, were keen to set these rules with enough of the global economy behind them such that China would be forced into line later on. For now, the shape of international standards in these areas remains up for grabs. The next step for the TPP, if anything, is whether a smaller group—such as the founding four —will break away and go ahead on their own, with a much smaller share of global GDP involved, and in the hope that others will join later.

Yves here. This conclusion is even more deadly than it seems, particularly coming from a neoliberal organ like the Economist. I have to confess to not reading the Economist much on this topic, precisely because the articles I did see hewed so tightly to party line: that the TPP and its ugly sister, the Transatlantic Trade and Investment Partnership, were “free trade” deals and therefore of course should be passed, since more “free trade” was always and ever a good thing. In fact, trade is already substantially liberalized, and the further GDP gains that economists could gin up using their models (which have overstated results) were so pathetically small as to amount to rounding error. Accordingly, contacts in DC told us that the business community was not pushing the deal hard: “Multinationals don’t see much benefit to be had from being able to sue Malaysia over environmental regulations.” The corporate support for the TPP in the US was thus much narrower than the cheerleading in the press would have you believe.

The coverage of the TPP in the media was schizophrenic, on the one hand describing it as part of Obama’s “pivot to Asia” (as in an effort to contain China’s growing hegemony), meaning it was clearly a political enterprise, an “everybody but China” deal, and on the other hand, saying that the reason Americans should support it was those miniscule trade benefits. And of course, there was nary a mention of the cost in terms of national sovereignity.

What is intriguing and heartening about the Economist verdict isn’t merely that the TPP is dead. It’s that it’s so dead that for it to be revived, it would have to be in radically different form, with a much smaller group of countries. And if I read the Economist piece correctly, the “founding four” does not include Japan, which joined the negotiations late. Japan’s famously powerful farmers are not likely to sign up for a deal that encroaches on the island nation’s beef and rice lobbies. And it’s hard to see how anyone would take a Pacific political or economic pact all that seriously that did not have China or Japan as members.