Ecosocialism Enters The US Political Dialogue

Note: Socialism has gained increased popularity in the United States as generational change leads people to thing of programs like healthcare for all, free college tuition and a more equitable economy, not the dated concept of the failed Soviet Union. Others see the recent evidence and impact of climate change as well as the degradation of the environment as requiring a new type of economy, ecosocialist. On a recent podcast, we discussed ecosocialism Victor Wallis author of Red Green Revolution: The Politics and Technology of Ecosocialism. Wallis sees ecosocialism as addressing two major crises of our era: growing wealth inequality and its resultant poverty, and climate change, which is central to the environmental crisis. Wallis explains why a livable future must be ecosocialist, what ecosocialism is and how we get there.

But, how does socialism fit in US elections? Bernie Sanders has put forward soft socialism, more in the format of FDR’s New Deal or Scandanavian Democratic Socialism, and shown its popularity among the US electorate. In countries like Venezuela, Bolivia and Cuba we see efforts to create ‘Socialism for the 21st Century’ learning from the mistakes of previous socialized systems and dealing with current challenges.

In the US, there is more socialism in place than we realize.  It includes energy and water systems, public transportation and public lands and more, there are programs in cities and states as well as the nation that are socialized. People us socialized systems every day among them public schools fire departments, police, libraries, the Postal Service and more. These are institutions of public ownership and control. On the Clearing the FOG podcast we discussed the breadth of US socialism with Thomas Hanna, author of “Our Common Wealth: The Return of Public Ownership in the United States.”

The reality is there has been a strong strain of socialized economies in the North American from before the US was founded. It existed in Indigenous cultures as well as the colonies. Indeed, neither could have survived without communalism and socialized economies. John Curl documented this very deep history in “For All the People: Uncovering the Hidden History of Cooperation, Cooperative Movements and Communalism in America” where he showed worker-owned business, cooperatives, and mutual aid are part of the DNA of the United States, also discussed on our podcast.

Socialism is growing in the United States at the time of growth in popular movements for economic, racial and environmental justice as well as peace because the US faces multiple crisis situations. The Occupy Movement’s call for the 99% brought issues of the unequal economy into the national dialogue. We’ve advocated ‘economic democracy’ through our project It’s Our Economy even before we helped organize Occupy in Washington, DC. Much of our Agenda for Economic Democracy, is now part of the public dialogue. Parts of it like National Improved Mediwww.care for All and the Green New Deal, which began in the Green Party, are now becoming popular in the Democratic Party and have wide popular support.

The article below by Jon Olsen co-chair of the Maine Green Independent Party, describes how the Green Party of the United States has become an ecosocialist party as a result of amending its platform in 2016. The Green Party is in tune with the movements of our times that are seeking a more just economy that confronts racism that has been with the US since its founding, inequality which is broader than at any time in history as well as the urgent need to protect the environment. KZ 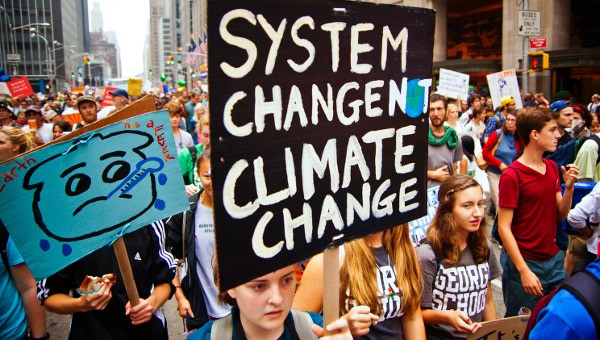 The Green Party of the United States, the First US Ecosocialist Party

Clearly, since Bernie ran openly as a socialist, the word is coming back into use and out of the bogeyman closet at last! But people attach so many different meanings and connotations that it is best to articulate what may be its best use in 21st century USA. Among those trying to get a handle on it is the Green Party of the US, which recently in its revised platform declared in support of a socialism-in-process:

Some call this decentralized system “ecological socialism,” “communalism,” or “the cooperative commonwealth,” but whatever then terminology, we believe it will help end labor exploitation, environmental exploitation, and racial, gender, and wealth inequality and bring about economic and social justice due to the positive effects of democratic decision making. Production is best for people and planet when democratically owned and operated by those who do the work and those most affected by those decisions . . . not at the whim of centralized power structures of state administration or capitalist  CEO’s and distant boards of directors.

I personally like the phrase “ecosocialism,” but not everyone does, so objections to it must be raised and addressed honestly. I can think of two principal related reasons why some object. First, when some people hear the word “socialism,” they still flash on the late-stage Soviet Union, as if that were the only possible model, but this response short-circuits thinking before it can get off the ground.

The second reason is related because it assumes that it will be too hard to overcome the first objection among other people, even if one is comfortable with the term.  If we regard corporate globalism as the chief enemy of the people of the world, and as left activists, we must do so, then surely we ought not to be timid in using a term that unequivocally challenges that hegemony, namely socialism. However, it is incumbent upon us to clearly define what we mean by socialism, and not let false narratives be put in our mouths.

We need to invent a form of socialism that not only can replace the dominant feudal-like corporate structures we detest but just as importantly, be culturally acceptable to the general public. In the USA, of course, this is a challenge, but one we are capable of handling.

The Green Party platform description goes a long way toward clarifying our intent. Despite ideological resistance, even the strictest libertarian is not threatened by the existence of a cooperative health food store, or the municipally run library, though they can be termed socialist structures. Why? Because there is no government coercion!

But what if these cooperative enterprises were the dominant structures? What if we could have a referendum to yank the corporate charters of the most objectively malevolent mega-corporations—the ones that grossly offend the environment, human rights and practice extreme labor exploitation? What if we declared, as the ultimate collective sovereigns (remember “We, the People declare our own Constitution) that these offenders had not more than one year to sell off inventory and dismantle themselves or their Boards of Directors would be arrested for such crimes as poisoning the air, soil, and water, along with various fraudulent representations, and their corporate assets seized?

If the products and services provided were truly needed, they could be produced under terms consistent with ecosocialist values. We need to re-activate the original intent definition of socialism to mean “control by the working class” including those currently not employed—all those who have nothing to sell but their labor. This involves expropriating the expropriators. It does not mean, of course, killing them off or wholesale imprisoning them, although some cases must undergo careful evaluation in that regard. The word “socialism” is a defiant repudiation of the rule of capital which now has a stranglehold not only on “the” economy (as if there could only be one!) but on all three branches of this government, and of the pervasive culture of commercialism.

Some will object, with good reason, “What about all the employees who are displaced? They would rather work under exploitative conditions that have no income at all!” Of course, we need to plan ahead to provide at least equal if not better compensation from the moment of dissolution. We can do this!

There is work to be done until everyone has sufficient housing, food and water, energy supply, health services, and educational opportunities. Once we have achieved this, then we need to apply this test to the rest of the world—no end to the need for labor, once we reject the notion that only when a profit is to be made by the capitalist class, shall there be a demand for labor! Bad premise! It is a matter of re-allocation of resources away from a war economy and mega-profits fora few to humane objectives. It will be the responsibility of a Green eco-socialist government to facilitate this transition.

Will we allow private business? Indeed, for this is where we see the rewards of innovation via entrepreneurial energy and the motivation to invent. But these enterprises need to be run within the context of reasonable ecological and human rights parameters and at a scale consistent with local supervision. Instead of positive socialist features within the context of an overall capitalist economy (e.g. the Scandinavian countries), we do just the opposite! We allow creative small businesses to operate within the context of a decentralized cooperative economy. Not everyone wants the responsibility to be an owner or manager and will be satisfied to work for an entrepreneur, under humane and generous working conditions. We need to terminate conglomerates by outlawing one company owning another company, though it may be permissible for one family to own more than one small business.

Needless to say, as part of this radical change, we need to break up the huge media complex that dominates news coverage that increasingly is hardly respected, and appropriately so! We have to encourage honest journalism that feels no need to self-censor due to the need to conform to the value system of upper levels of corporate management, including CIA infiltration (note: Operation Mockingbird).

I look forward to an honest commitment to Truth, which is the daughter of Reality, no matter where she leads. Truth matters, but Reality does not care what people merely “believe.” It just is! If people in media positions are free to and encouraged to act with honor, we can get the truth. With truth we can pursue justice; and with justice, peace among all peoples becomes a realistic objective. All in favor, say “Aye!”

Jon Olsen is co-chair of the Maine Green Independent Party. He is a long time peace and justice activist and a Green Party member for 30 years. A graduate of Bates College in Maine with a degree in philosophy, he went to the University of Hawai’i for a Master’s Degree in the same field. He returned to Maine in 2001, serving twice on the Steering committee of the Maine Green Independent Party. He has conducted town caucuses and gathered signatures for Green Party gubernatorial candidates. His recent book, Liberate Hawai’i, describes the legal and historical research done by Hawaiian scholar-activists. The book documents the illegal claim of the US to the sovereignty of Hawai’I and demonstrates its fraudulent nature as well. Olsen draws a parallel with the similar fraudulent attempt by the late USSR to do the same to Lithuania.

This article is based on an article originally published in Vol. 34, Winter/Spring 2017, Green Horizons Magazine, GREEN PARTY and SOCIALISM—Engagement, but Marriage?  by Jon Olsen. Note: The actual title of the article was mistitled as “But Marriage?” should have been “But is there a Marriage?”