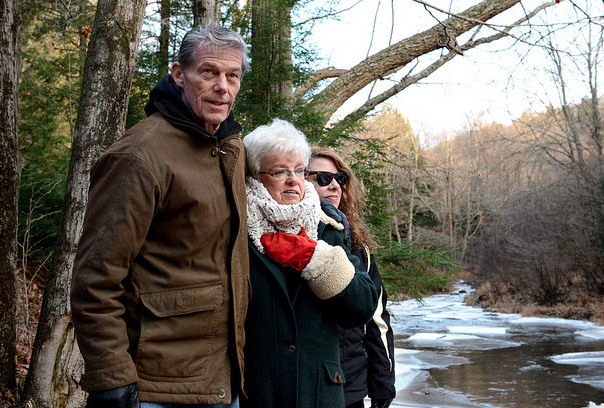 Grant Township Supervisor Jon Perry with residents Judy Wanchism and her daughter, Stacy Long, at a fishing hole on Little Mahoning Creek. Supervisors and residents passed a local ban on fracking waste injection wells to protect the watershed and its residents. © Kyle Pattison for Public Herald

For the first time in United States history, an ecosystem — a watershed, to be exact — has filed to defend itself in a lawsuit. The suit aims to reverse a local ban on the injection of fracking wastewater.

Little Mahoning Watershed in Indiana County, Pennsylvania recently filed a motion to intervene in a lawsuit to defend its own rights to exist and flourish. But watersheds can’t hire lawyers or speak, so how can one defend its rights, and do watersheds even have rights?

The Little Mahoning Creek waterway flows through Grant Township, where elected officials unanimously passed a “Community Bill of Rights Ordinance” in June 2014 which declared “the rights of human and natural communities to water and a healthy environment,” including what’s commonly called the “Rights of Nature.”

The ordinance states that any legal action to “defend the rights of ecosystems or natural communities…shall bring that action in the name of the ecosystem.” This gives the Little Mahoning Watershed a kind of ‘personhood’ within Grant Township and gives authority to the township’s attorney to litigate on the watershed’s behalf.

Two months after the Bill of Rights passed, Pennsylvania General Energy (PGE), an oil and gas company based in Warren, Pa., filed a lawsuit in federal court claiming the township used an “impermissible exercise of police power” by prohibiting the underground injection of industrial waste from oil and gas fracking within the township. PGE declined to comment on the watershed’s motion to intervene.

All 200 residents in Grant Township rely on private water wells for their drinking water. The Grant Township Community Bill of Rights establishes the Rights of Nature and the community’s right to self-govern in order to protect groundwater from the documented risks of underground waste injection.

Yet despite the township’s ordinance, the U.S. Environmental Protection Agency (EPA), which regulates injection wells, issued a permit to PGE in August to inject fracking waste in Grant Township within the Little Mahoning Watershed.

“You can live without a lot of things, but you can’t live without water,” said resident Judy Wanchism in an interview with Public Herald. Wanchism has lived in Grant Township for 59 years and co-founded East Run Hellbenders Society, a group of residents fighting to protect their watershed. Her home is about one half mile from the injection well site proposed by PGE.

Three parties appealed the permit, including Wanchism, but EPA Region 3 denied all three claiming lack of “standing” for one and failure “to demonstrate [a] review is warranted” for the other two submitted.

EPA Region 3 added in an email that the agency “will not issue a permit if the injection can result in movement of fluid containing contaminants into an underground source of drinking water.” According to EPA Region 3, the agency has never revoked an injection well permit based on appeal.

Brines from Class II [injection] wells can enter drinking water supplies directly, through cracks and leaks in the well casing, or indirectly, through nearby wells, such as those once used for oil and gas production, that have ceased operating…Because groundwater moves very slowly, any contaminants that enter it will remain concentrated for long periods of time, and cleanup, if it is technically feasible, can be prohibitively costly.

In Pennsylvania, both state and federal agencies have authority over injection wells, and on October 22, 2014 the Pennsylvania Department of Environmental Protection (DEP) issued a permit of its own allowing PGE to construct its site. Residents are now in the process of appealing DEP’s permit as well.

“Until Pennsylvania communities are liberated to protect their health and safety, they will remain the subjects of their corporate-driven legislature,” reads PACRN’s website.

Similar to other municipalities before it, Grant Township’s new Bill of Rights asserts:

…private corporations engaged in the depositing of waste from oil and gas extraction are wrongly recognized by the federal and state government as having more ‘rights’ than the people who live in our community, and thus, recognition of corporate ‘rights’ is a denial of the rights of the people of Grant Township…

Oil and gas companies have injected high pressures and billions of gallons of fluids into ‘fracked’ shale gas wells in recent years. Around 1.2 billion gallons of fracking waste was produced in Pennsylvania in 2012 alone. However, the question of where waste should go remains uncertain. For now, waste that returns to the surface astoxic, radioactive soup must be hauled to Class II injection wells, treatment facilities and industrial landfills — or to people’s backyards as Public Herald recently reported.

All of the disposal methods used for fracking waste come with risks to human health and the environment. Aware of these risks, other municipalities have enacted stricter zoning or appealed permits, like those issued by DEP to store waste in backyards as in Smithfield Township, Bradford County.

In Grant Township, officials took a different approach and reached out toCommunity Environmental Legal Defense Fund (CELDF), a public interest law-firm, to write a Bill of Rights prohibiting waste disposal as a precautionary measure. Now that PGE is suing the township, CELDF is representing residents and the watershed pro bono.

“PGE’s proposed injection well would seriously threaten not only the water supply of residents, but also the integrity of the watershed if something goes wrong with the injection well,” wrote CELDF attorney Thomas Linzey via email.

According to PGE’s lawsuit, communities don’t have the right to prohibit its waste injection. In other words, a community can’t say ‘no’ to PGE’s operations.

The Rights of Nature

In 2008, Ecuador became the first country in the world to declare the Rights of Nature in its Constitution, recognizing that nature “has the right to integral respect for its existence” and a right to regenerate “its life cycles, structure, functions and evolutionary processes.”

But just because nature’s rights are written into law doesn’t mean they’re enforced. In Ecuador, President Rafael Correa gave up on a plan to conserve remote parts of the Amazon rainforest in 2013 to allow for oil drilling in Yasuni National Forest. Correa cited the country’s need to pay its debts as his reason for abandoning the conservation plan.

Ecuador’s Constitution recognizes the Rights of Nature, but there is no legal framework for enforcement. In contrast, Bolivia established “Ley de Derechos de La Madre Tierra” or “Law of Mother Earth” in 2010, outlining several specific rights and setting a framework for moving society toward respecting those rights. The law arose after the country was ravaged by ‘natural’ events many scientists attributed to climate change, when rising temperatures melted glaciers Bolivians depended on for water for thousands of years.

Bolivia’s Law of Mother Earth is “committed to giving communities new legal powers to monitor and control polluting industries,” according to a report by The Guardian.

Still, implementation of nature’s rights is slow and difficult, even deadly.

Antún in a speech featured to YouTube: “It is time to say enough to the corruption that threatens our territory of the Ecuadorian Amazon.”Just last week, the body of missing indigenous leader José Isidro Tendetza Antún was found buried in a mock grave marked “no name,” the latest in a series of murders of environmental activists in Ecuador in recent years. Antún planned to denounce a mining project at a Rights of Nature Tribunal during climate talks taking place in Lima, Peru the week following his death.

In Pennsylvania, even though the state’s Constitution guarantees the right to a clean environment, families have complained of illness due to exposure from contaminated air and water in recent years related to fracking, without much accountability.

Community rights and Rights of Nature are considered a first step toward creating frameworks that support legally-binding, sustainable relationships between humans and ecosystems.

The United States built a foundation on the ability to question authority, and the question of who has ultimate power  – local, state or federal government – has been disputed ever since.

The original Pennsylvania Constitution of 1776 stated:

…government is, or ought to be, institutes for the common benefit, protection and security of the people, nation, or community; and not for the particular advantage of any single man, family or set of men who are only part of that community…

The interpretation of “common benefit” is left to the courts, along with whether “part of a community” can prevent a “single man, family or set of men” from pursuing their own private interests. The 1776 Constitution continues:

…the community hath an indubitable, unalienable and indefeasible right to reform, alter or abolish government in such manner as shall be by that community judged most conducive to the public weal.

And the U.S. Declaration of Independence, of course, states:

…it is the Right of the People to alter or to abolish it and to institute new Government, laying its foundation on such principles and organizing its powers in such form, as to them shall seem most likely to effect their Safety and Happiness.

Under Pennsylvania law, municipalities have the power to control development through zoning, a form of land use planning designed to ensure reasonable and desired development in the community. But in 2012, the state legislature passed Act 13, an update to oil and gas laws, which attempted to remove the authority of local municipalities to regulate where fracking operations take place.

In a lawsuit brought against the state by several municipalities, the Pennsylvania Supreme Court ultimately ruled Act 13’s preemption statute “unconstitutional.” For now, communities maintain their right to regulate certain aspects of fracking.

However, what Grant Township and other communities are doing is different than zoning. They go much further by asserting the right to self-govern as well as the Rights of Nature.

Yet, does nature really have the same rights as a person? Corporations are considered ‘persons’ under current U.S. law, but not ecosystems. Both ecosystems and corporations ‘contain’ real living people, but it will be up to the courts to decide whether both have equal rights as living entities.

Despite shortfalls in regulatory oversight and documented risks, injection well numbers continue to grow at the expense of water supplies.

The EPA’s performance overseeing the oil and gas industry came under fire in recent years from both environmentalists and the industry as fracking increased the demand for injection wells across the country. This led to a nationwide debate in 2014 about safety practices after USGS published a study connecting injection well disposal to thousands of small earthquakes from Oklahoma to Ohio.

A June 2014 study by the U.S. Government Accountability Office found fault with EPA “for inconsistent on-site inspections and guidance that dates back to the 1980′s.” According to reporter Susan Phillips, “Of the more than 1800 class II wells in Pennsylvania, the GAO reports only 33 percent were inspected in 2012.”

In 2012, EPA shut down an operating injection well in Bell Township, Clearfield County, less than an hour’s drive from Grant Township, after Exco Resources injected fracking waste in Bell Township for months while “failed mechanical” problems were recorded by the company.  EPA fined Exco $159,624, but EPA Region 3 told Public Herald that Exco’s repairs of its injection well passed EPA “mechanical integrity” tests and the well is now back in operation.

Despite the dangers, PGE has the right to pursue injection well operations under current federal and state law. Even after communities say no publicly, and at the polls, EPA is mandated to issue permits for waste injection and many other activities that put environmental and public health at risk.

In Grant Township, federal courts will decide who has the right to determine what happens next — PGE, state and federal regulators, Grant Township or the Little Mahoning Watershed itself.