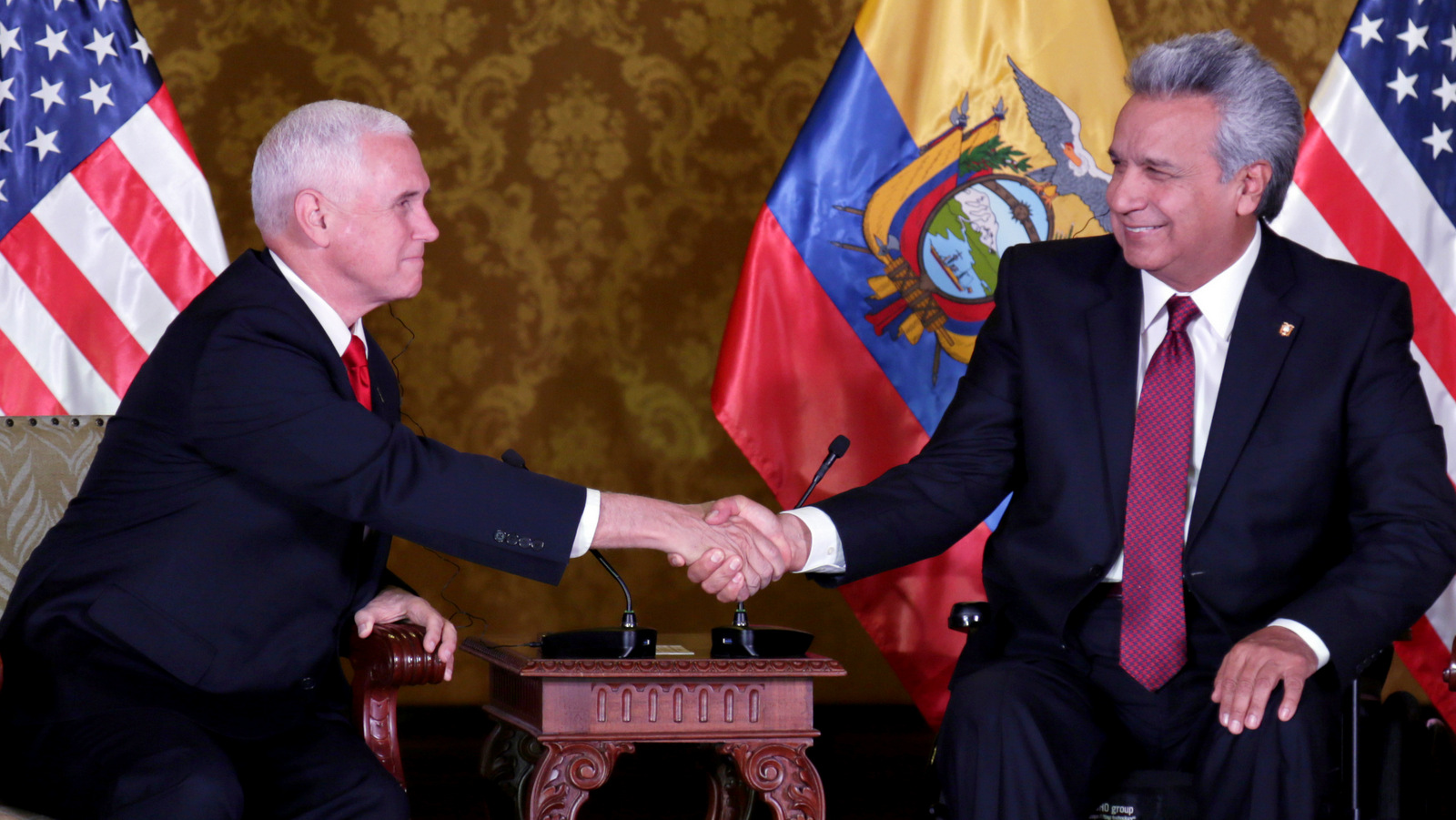 Ecuador Bows To US And IMF, Entering New Neoliberal Era

The warmth displayed by authorities over the past month to visiting U.S. Vice President Mike Pence and the IMF, respectively, further proves that Ecuador is melting back into the arms of international financial interests.

QUITO, ECUADOR – Ecuador’s passionate re-embrace of the International Monetary Fund (IMF) offers one of the clearest and most dramatic signs that the country’s leadership is dead-set on shedding any vestiges of the “post-neoliberal” era it was said to have entered a decade ago during former President Rafael Correa’s Citizens’ Revolution.

The warmth displayed by authorities over the past month to visiting U.S. Vice President Mike Pence and a team from the IMF, respectively, further proves that Ecuador is melting back into the arms of international financial interests. Yet, despite authorities’ almost apologetic attitude toward foreign capital over the spats and breakups of the past, the people of Ecuador appear destined to suffer further abuse at the hands of the domestic and transnational capitalist interests that inflicted such grievous harm on it in the past.

Pence’s visit to the Andean nation last month to meet with President Lenin Moreno offered one such occasion for the groveling attitude the once-proud government of Ecuador has adopted toward the U.S. and IMF. It comes amid the rolling reversal of fortunes faced by the wave of left-nationalist social democratic governments that rose in response to the devastation wrought by U.S.-dictated neoliberalism.

“We communicated to the vice president the need for support to permit multilateral organizations to generate sources of financing with favorable conditions for Ecuador,” said Martinez.

Days prior, the Ecuadorian presidency received approval from the National Assembly to move forward with the Law on Productive Development, which critics blasted as a threat to the country’s social services and welfare programs. The law will require that the government approves only budgets that result in revenue — i.e., taxes– outweighing expenditures on such vital state functions as public education, health care, national defense and public security.

According to Valerie Carmel, a writer for teleSUR English:

The same law includes tax reductions and exemptions for foreign investors for up to 15 years, as well as exemptions for all new investments on paying the tax on currency sent abroad.

Economists have warned that eliminating the second tax could gravely affect Ecuador’s dollarized economy by allowing the extraction of large sums of money.

The law also includes debt forgiveness for private companies who have failed to pay their share of taxes to Ecuador’s Internal Revenues Service. Economists estimate the country is giving up at least US$2.2 billion.

Instead of increasing public revenue to sustain social spending, the law corners the state, forcing it to give up revenue and cut public spending.”

The imposition of such laws, when accompanied by a widely-expected free-trade agreement with Washington and the acceptance of massive loans from the IMF, spells a recipe for disaster in regard to the wellbeing of the Ecuadorian people, especially its poor people and working class. They’ve certainly been down this road before.

Having been rolled out in Chile during the 1973-90 dictatorship of Augusto Pinochet, before being formalized under Ronald Reagan during the 1980s as the “Washington Consensus,” neoliberal policy agendas such as those adopted by Ecuador resulted in major economic trauma, humanitarian crises, and tremendous debt.

As a country split between its export-oriented coastal port cities and its agrarian producers in the campo, Ecuador has long been an export-dependent economy. Its top exports, historically, have been bananas, cocoa, cut flowers, and a range of minerals including gold – all of which carry tremendous costs for local communities, owing to the exploitative nature of production and its long-term environmental impacts. This was especially true in indigenous communities.

In Ecuador and across the Global South, the IMF demanded the imposition of structural adjustment programs (SAPs) that destroyed protectionist barriers and hobbled independent national development. Tariffs and subsidies for national producers were cut back, social spending was reduced to minimal levels, workers and the environment were left with few protections, while state enterprises were privatized and sacked by local and foreign elites. Any attempt by governments to impose the slightest bit of control over foreign investments resulted in capital flight or a halt to investments by transnational capitalism.

The neoliberal policies of the 1990s devastated Ecuador with raised transportation costs, increased prices for household gas, and the replacement of the national sucre currency with the U.S. dollar. The result was major instability in Ecuador throughout the 2000s, with the country hemorrhaging desperate economic migrants and with extreme political unrest, paired with the regionalism of the so-called partidocracia, rendering the country largely ungovernable.

The electoral victory of leftist economist Rafael Correa in 2007 offered hope that the corrupted local oligarchy would finally be brought to heel. Under the banner of buen vivir – good or dignified living – Ecuador began opening a new path toward redistributing the wealth to the poor and dispossessed through social programs, while pursuing a development path oriented toward sovereignty, South-South collaboration, and integration with fellow leftist governments in the region.

Oligarchs, such as the hated Isaias Group, faced expropriations for enriching themselves at the cost of the people, while taxes were raised on the rich and spending on public services massively expanded. Correa signaled the seriousness of his break with global transnational interests when he defaulted in 2008 on over $3 billion in foreign bonds, describing the debt accrued to benefit domestic elites as “illegal, illegitimate, and corrupt.”

Yet, despite his claims to represent “21st-century socialism,” Correa stopped well short of nationalizing resources like oil, while agreeing to controversial infrastructure development loans with China based on long-term oil contracts, earning the ire of one-time allies on the left and especially indigenous groups in oil-producing regions.

When commodity prices plummeted a few years ago, the shock felt by producers like Ecuador and Venezuela was profound. Paired with the costs from the tremendous 7.8-magnitude earthquake of 2016, Correa spent his last year in power beset by controversy over the debt that had accrued with China, and the perception that his loyalties were divided between the aspiring national bourgeoisie and the poor. Most sectors of Ecuadorian society were largely divided when it came to their thoughts about the leader of the Citizens’ Revolution.

In 2017, Correa’s chosen successor Lenin Moreno came to power, promising to continue the leftist leader’s policies. Instead, the new leader quickly turned on his former boss and adopted the program of the right-wing opposition, setting about destroying the Citizens’ Revolution piece by piece. In the meantime, he courted Washington-directed global financial institutions like the IMF and grew distant from Correa-era allies Cuba and Venezuela.

Moreno also backed off from integrationist multilateral projects like the Bolivarian Alliance for the Americas (ALBA) and UNASUR, the latter of which appeared nearly dead last week following Ecuador’s demand that its Quito headquarters be relinquished to the Ecuadorian state.

The Moreno government’s push to undo Correa’s legacy has reached an acute phase, with the former head of state now facing potential arrest by Interpol if it decides to honor an arrest warrant issued by Ecuador’s judiciary for his alleged support for a 2012 attempted abduction of an opposition lawmaker living in Colombia.

Many suspect that the move is a ploy to reassure financiers who may be worried about the possibility that Correa would return, once again come back to power, and halt the plunge toward neoliberalism.

Pence’s visit to Quito coincided with the first major IMF Article IV visit to the country in years, where a team held over two weeks of discussions with the government over how far the government would be willing to go to secure IMF loans.

The IMF report on the consultations enthusiastically discusses the re-establishment of “a competitive private-sector driven economy,” a far cry from the original sentiment of the Citizens’ Revolution – “Another World Is Possible” – that boosted Moreno into prominence. The IMF team praised the Productive Development Law, as well as moves made to introduce “flexibility” to the labor market – a euphemism for the weakening of the labor code to favor employers – tackle corruption, and broaden trade agreements like the anticipated free trade-agreement to be entered into with Washington later this year.

A report by JP Morgan released earlier this month offers a no-nonsense analysis of the government’s “complicated dance” to reintroduce conformity with IMF diktat back to the country’s ruling political culture, given the awareness of Ecuadorian social movement toward the devastation it would bring.

Moreno’s sense of political strength is a relevant variable for his ultimate decision to sign off on any recommendation to embrace a Fund program. A current court case against ex-President Correa for allegedly directing a 2012 kidnapping of a political opponent could impede Moreno’s chief political opponent from coming back to Ecuador from his current location in Belgium, and also weaken the Correista block in the National Assembly.

While Moreno would likely have to work hard to build a congressional coalition to pass any hypothetical additional IMF conditionality, we think the center-right opposition could be brought on board, especially as Moreno has no intention of running for reelection, and for now there is no heir apparent from the center-left. Meanwhile, the government has been portraying the Pence [visit] as a foreign policy victory and a sign of strong international backing for the Moreno administration. Aside from security and trade issues, the visit is likely to help secure key support from Washington in any future multilateral assistance program.”

But such “multilateral assistance,” whether it be from the IMF or the World Bank, will come at a great cost and will likely give a bigger boost to social inequality and environmental degradation than it will to the long-term financial health of Ecuador.

This would be disastrous for the people of the region, potentially leading to new waves of mass migration from the south to the north – another aspect of neoliberal globalization’s model for maximizing profit from poorly-paid labor.

As author and political economy professor John Smith wrote in Imperialism in the Twenty-First Century (2016):

By uprooting hundreds of millions of workers and farmers in southern nations from their ties to the land and their jobs in protected national industries, neoliberal capitalism has accelerated the expansion of a vast pool of super-exploitable labor. Suppression of labor mobility has interacted with this hugely increased supply to produce a dramatic widening of international wage differentials, which, according to World Bank researchers, ‘exceed any other form of border-induced price gap by an order of magnitude or more.’”

Ecuador is currently witnessing a rapid transformation from a proud, sovereign nation with progressive social and macroeconomic policies to a debtor nation ruled by a cunning technocrat whose government may well reduce investments in education, health care, food, energy and social programs back to pre-Correa levels. Government ministries could rapidly be dissolved, while public assets are in danger of being privatized.

As is the case in other parts of the Global South, the people of the Andes are facing a major offensive by U.S. imperialism and U.S.-aligned transnational elites. The fight against neoliberalism may not have found more than a glimpse of a “New Dawn” in the states, trade blocs, and alliances of “21st-century socialism” — but by no means does this signal that those who freed themselves from poverty, illiteracy and maldevelopment over the past years will allow themselves to be dragged once again into the long, dark night without putting up a fight.