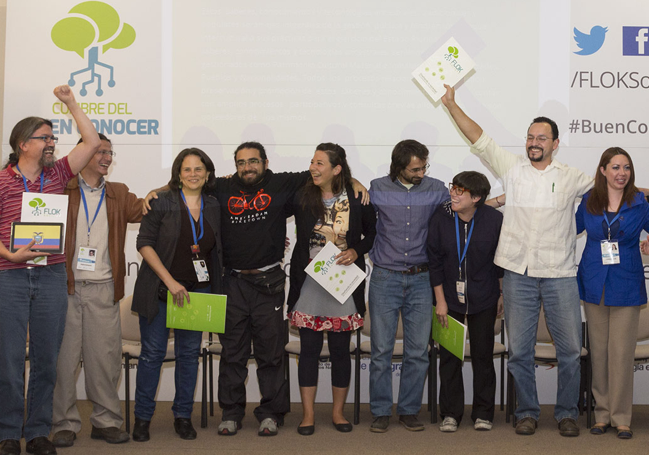 Education is a common. It has to be open and free access, as a mean to maximize the participation of all people in social knowledge economy. When we talk about open education we talk not only about ICT. Access to educational resources (tangible and intangible) must be released under open licenses. Free access must be ensured distributing repositories via Internet, intranet or other means. Education systems must recognize learning by formal and informal experiences, at any stage of life. All work done with public funds should have open and free license and access. It is necessary to strengthen and create learning communities as a strategy for knowledge production and social economy.

Science should be accessible to everyone, being the requirement for open data, processes and results of scientific research and its management through free licenses and open protocols and formats, as well as construction of a collaborative scientific commons platforms, and knowledge banks repositories. Only in that way we can guarantee the development of human capabilities and access to resources, processes, and scientific results and also the transparency in the management of this aspects. Open and common systems of scientific knowledge, empowers and motivate citizens and communities to be active actors in the production, dissemination and reuse of scientific knowledge. Finally, the opening of a collaborative commons of science is crucial for scientific progress. It is a requirement of the nature of science that it has to be open, public and reproducible, without imposed and artificial barriers. The organization of scientific processes should be accompanied by measures that encourage social economy of the common and open knowledge.

Cultural practices are generating knowledge and are the basis for building and transmitting local and global imaginary. They are expressed in a multiplicity of forms and contents, in terms of multiculturalism and diversity of our societies. Free Culture is a living set of tools, strategies and, geographic diversity and collective historical practices that: a) extends and revalues citizen living cultural practices, generating affection and commoners; b) encourages the development of cultural work providing decent working conditions to cultural actors; c) intensifies the value of enhancing culture in the processes of the economy and its markets that go beyond the notion of industry; protecting other forms of management, including the social economy and other open economic models; and, d) broadening and democratizing the circulation, reuse and redefinition of knowledge and cultural wisdom through technology and communitarian and individual practices.

The current agro-food system is in crisis. It´s necessary to change the concept of “resource” by Heritage. It ´s imperative a transition to a sustainable agro-food system that optimally use natural energies, which remains in the hands of the actors in each territory, promoting agro-ecology, the use of machinery and designing processes and repositories. We propose the implementation of an open source access license for repositories of forest agro biodiversity heritage. It is necessary to improve legal frameworks necessary to expand their rights and freedoms. We suggest the need for a new institutional structure to ensure food sovereignty, the implementation of systems for the generation and exchange of knowledge by integrating researchers and producers, ancestral knowledge, thus ensuring the common good. Finally we suggest the recognition of the participatory guarantee systems for agro-ecology.

Promote bio-knowledge as an effective alternative to conserve and sustainably use of biodiversity on the planet and an open commons regime. From Ecuador, a pioneer country in recognizing the Rights of Nature, biodiversity as a strategic and sovereign sector, and good living as a paradigm of coexistence, to promote bio-knowledge as a bio-centric contribution for the protection of common goods and sovereign of mankind. Bio-knowledge is the set of wisdoms, knowledge and traditional applications, both traditional and scientific, that integrate the conservation, research and sustainable use, safe and effective of biodiversity, complex systems of nature, life forms based on the dynamic interaction and respectfully to the rhythms of Pachamama. We seek to disseminate policies and projects that achieve: 1) to consolidate a platform for natural and cultural biodiversity with the leadership of the National Institute of Biodiversity and solidarity networks nationally and internationally, 2) to promote a system of open common bio-knowledge but protected, 3) define the integral value of the biological elements as sources of information that allow us to understand the biological resources beyond the material, 4) to transform the productive and cognitive matrix with a territorial, cultural and ecosystem relevance, 5) to strengthen capacities for bio-centric culture, where humans understand ourselves as part of nature using effective mechanisms for active civic participation among government, academia, communities , society and the private sector.

Energy sovereignty is built on providing management and energy efficiency, based on inclusive and proactive participation of all stakeholders on the territory and ecosystem sustainability. Generation, access and dissemination of disaggregated data, geo-referenced and open information about the energy system in the country should support a new paradigm of energy planning and protocols. These should consider needs, capacities, renewable resources, methods of conservation of resources; and the use of open-type technologies, appropriate and appropriable. As a priority, appears the creation of spaces and mechanisms to facilitate the articulation of state and civil society, training activities, research, innovation, production and management of energy consumption. In this articulation, efforts must agree on a regulatory agenda that facilitates the reciprocal transformation of energy and production matrices and democratization of the provision of energy services.

Open design is the basis for the transition from a competitive society to a collaborative production society. It enables a transition from a exclusionary, unsustainable, and privatization society to an inclusive, sustainable and caring society which would give answers to specific problems. Free knowledge enables a cooperative, collaborative and co-production with methodologies related to free technology. Industrial production oriented to commoners encourages to: incorporate local knowledge, collaborative innovation, production according to the needs, the enrichment of the global scientific and technological culture, and sustainable use of resources and energy. This transformation of the productive matrix directly impacts in the lives of people and promotes a daily routine based on new values such as the commons, reciprocity, solidarity and the rescue of the ancestral values to contribute to Good Living, Buen Vivir.

Open government and open data favors the adoption of new social, economical, political, technological, democratic, decentralize, commoners-based models of society as alternative to the present concentration of power in capitalist knowledge economy. The deployment of infrastructure and service development should promote and protect civil and human rights, citizen participation, democracy, transparency, sovereignty, and independence of the state and citizens; additionally permanently protect the privacy, security, collective ownership of the data and avoid unauthorized communications monitoring, collecting, processing, and tracking. All sensitive data is not generated in the development and management of open government must be published as open data in compliance with the principles of accessibility, interoperability, quality, integrity, and open formats and free licenses which permitted free redistribution and reuse without technological constraints. The exercise of open government must be accompanied by a national process of education that fosters in citizens’ active participation rights, promoting and hosting the creation of civic solutions exercise, and the emergence of new forms of organization, empowerment and democracy network from digital and physical spaces.

Social knowledge economy is based on the principles of reciprocity, mutuality and common good, which are also the foundations of civil society and social economy. Any development of legal and institutional frameworks must state from existing actual practices, and proceed in accordance with these principles and built collaboratively with civil society actors. Social knowledge economy public policies should reflect the principles of an egalitarian relationship between the state and civil society, ensuring democratic participation of citizens.

Since states are constitutionally required to ensure the safety of citizens, it also must do it in the digital environment, in the context of respect for the free exercise of human rights. They should build an open technological infrastructure that promotes decentralization and net neutrality. And they must strengthen mechanisms for accountability and transparency of information in their institutions. In Addition, it should promote an educated society on free technologies that together promote the generation of human talent for innovation and production of free knowledge for technological sovereignty. Universities, industry, government and citizens are all necessary parts to achieve a society of free knowledge.

Proprietary software supports cognitive capitalism. It is impossible to a consolidation of social knowledge economy, education, culture and free society without the mass adoption of free software. The countries of Latin America and the world must promote and establish collective synergies necessary to sustain the dynamics that, for years, hacktivists, activists, researchers and developers of free software worldwide have enriched the digital commons. As commoners we hope enforceable policies of the States through regional alliances to achieve technological sovereignty of governments and technological autonomy of communities and citizens, avoiding dependence on large corporations and ensuring the security and privacy of communications.

It can´t bring into being a social knowledge economy without universal access to a free and open Internet. The principles of openness, freedom, democracy and embedded collaboration protocols and Internet architecture must be transferred to the management, access, development and policies that regulate it. Take the Internet as a common good is the foundation to counteract the different forms of domination (including political domination), cultural subordination, technological dependencies, the consolidation of a model that privatizes and appropriates knowledge; a model that centralizes and controls infrastructure networks and contents that circulate by it. The same rights that people have outside Internet must be protected when they are connected. Therefore Internet access must be reinforced as an enabler of the exercise of human rights and their advocacy in the digital environment. The net neutrality must be protected at all costs to prevent the establishment of first and second category Internet. We can´t move toward the Good Living without a universal, affordable, quality, free and open broadband Internet access. The government, in collaboration with other stakeholders, has the responsibility and obligation to create conditions for broadband internet access fully exploited by the public, allowing a more just and inclusive society, making it part of the management and shaping of their own development.

The territory, in its multiple dimensions and scales, is a generator of knowledge and therefore must be recognized as a commons / common good. From this perspective we recognize that the territory has to be planned, built and managed collectively to ensure democratization and sustainability of life, based on logics of social knowledge economy as a counteract to the spatial practices of cognitive capitalism: services privatizations, real violence, creative cities, smart cities, museification processes, maquiladoras cities and more. The development of regional policies must be based on the revaluation of self-organizing local production land forms such as municipalities and communities, popular dissemination practices for communication and the provision of tools such as collaborative urban planning and landscape, popular assemblies, copyleft knowledge, and cognitive work mingas.

Position Ancestral, Traditional, Popular and Intercultural dialogue Knowledge and Wisdom, as the foundation for a world of SUMAK KAWSAY as abundant life. Strengthen the free exercise of collective rights, organizational processes and the right to territory and territoriality as a priority for conservation, preservation, promotion and guarantee of knowledge, skills, technology communities, peoples and nationalities in the context of collective rights established in the Constitution of the Ecuadorian Republic in 2008 (with an emphasis on art. 57 and 58). This traditional and popular knowledge and technologies will be integral axis on governance and to have intercultural practices for the exercise of the Plurinational State approach. The ancestral wisdom, knowledge and technologies, will be declared and managed as Material and Immaterial Cultural Heritage of Communities, Peoples and Nationalities. All processes related to the management, preservation and promotion of this knowledge and wisdom must have extensive previous participatory processes with the peoples who possess them.