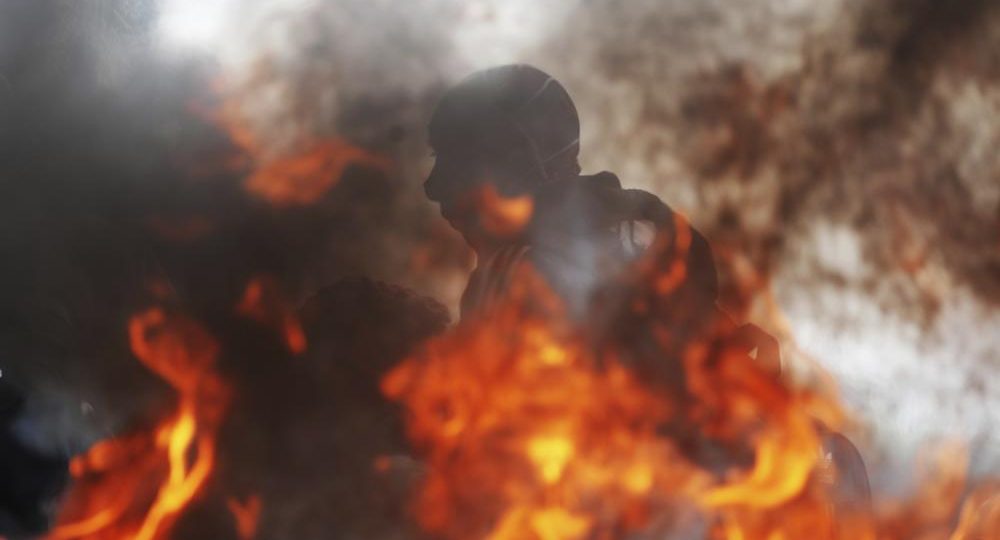 Above photo: Ecuador rebellion during June 2022.

Inflationary pressure in the region has also influenced the elections in Colombia.

An alliance of Indigenous organizations in Ecuador have held daily demonstrations after sharp increases in the costs for fuel and food.

The Confederation of Indigenous Nationalities of Ecuador (CONAIE) began their general strike actions on June 13 after huge price hikes crippled the capacity of rural and urban communities to access transportation and food for their households.

In response to the demonstrations and an assortment of other forms of resistance, President Guillermo Lasso has declared a state of emergency in several provinces of the South American state. The order reads in part that: “To declare a state of exception due to serious internal commotion in the provinces of Azuay (south), Imbabura (north), Sucumbios (east) and Orellana (east).”

Although the Indigenous organizations sparked the mass demonstrations which in some cases have turned violent, other key sectors of the population such as students and workers have joined in the nationwide protests. Conservative President Guillermo Lasso has failed to meet the demands of CONAIE and other organizations.

CONAIE has put forward ten demands to the government of President Lasso which calls for additional fuel subsidies, the reversal of plans to privatize state assets and a moratorium on the development of any new oil and mining projects. In the recent period inflation has swept through many countries in South America and across the world.

Many have suggested that the economic impact of the COVID-19 pandemic related to supply chain bottlenecks and the failure of various capitalist governments to implement policies aimed at controlling prices, as being major triggering factors in the rapid increase in commodity prices and shortages. In Ecuador, demonstrators are blocking roads to prevent transport trucks from reaching their destinations. The military leadership of the country has committed to reopening the highways in order for commerce to resume.

The turmoil inside the country has impacted the political stability of the Lasso administration which recently survived an impeachment attempt by the parliament. Lasso came into office one year ago promising to create a more business-friendly atmosphere for foreign investment.

Guillermo Alberto Santiago Lasso Mendoza is a 66-year-old veteran businessman-banker and right-wing politician. He has served as the 47th president of Ecuador since taking office on May 24, 2021. The ascendancy of Lasso represented the first-time in two decades since there has been an ideologically conservative head-of-state.

The president had previously served as the Governor of Guayas during 1998-1999. Later in 2003, he was appointed as an Itinerant Ambassador of Ecuador during the administration of Lucio Gutierrez. As a businessman, he is the previous CEO of Banco Guayaquil. When the left-wing government of Rafael Correa was in power, Lasso was a fierce critic of his policies.

Lasso was also appointed as the CEO of operations for Coca-Cola corporation in order to rebuild the company in the face of its bankruptcy in Ecuador. He has held seats on the Board of Directors Guayas Transit Commission and the Andean Development Corporation.

Later in 2012 he founded the Creating Opportunities Party and then ran for president the following year against Correa, when he lost by a landslide. In 2017, Lasso again failed to win the presidential election by a very narrow margin against Lenin Moreno. In 2021 he won the presidency and immediately imposed neo-liberal economic policies.

A report published by Bloomberg on June 29 described the current crisis saying: “Ecuador President Guillermo Lasso survived an impeachment vote late Tuesday (June 28) after a hard-left opposition party failed to rally other smaller groups in congress to oust him as his government moved to make concessions to defuse the political crisis. With only 80 of 137 lawmakers voting to remove Lasso, the impeachment attempt failed to clear the 92-vote hurdle needed to remove the president from office. Another 48 lawmakers rejected the motion, with nine abstaining after a session that lasted about 12 hours and included three voting attempts.”

Developments in Ecuador can be viewed as a harbinger of the political mood throughout the South America, Central America and Caribbean region. In 2019, similar demonstrations led by the Indigenous communities erupted over the neo-liberal policies of former President Lenin Moreno.

A recent attempt by the administration of President Joe Biden in the United States to host a Summit of the Americas in Los Angeles was marked by controversy and boycotts. The Los Angeles gathering clearly illustrated the decline of U.S. hegemony over the Southern Hemisphere.

Results of the national elections in Colombia were announced on June 19 resulting in the ascendancy of a left-wing administration headed by Gustava Francisco Petro Urrego as president and Francia Elena Marquez Mina as vice-president. Marquez is the first Colombian of self-identified African ancestry in its two centuries of independence.

Marquez is a longtime environmental activist, feminist and human rights lawyer. She along with Petro became a part of the Historic Pact for Colombia Coalition which consists of several other political parties.

Petro was the founder of Humane Colombia political party in 2011. He is a former guerrilla fighter with the 19th of April Movement which demobilized and became the M-19 Democratic Alliance party. A split within M-19 leading to the creation of Humane Colombia.

Some analysts have viewed the overall economic crisis in the oil-producing state as prompting the recent national results. There are a host of burgeoning problems stemming from a failed peace agreement with the armed revolutionary movement of FARC, the persistent impoverishment of millions inside the country and the inflation which has plagued the entire capitalist world.

One policy shift announced by the incoming Petro government is the re-opening of the border with the neighboring Bolivarian Republic of Venezuela. Relations between Colombia and Venezuela became extremely strained after repeated attempts by the U.S. to foment a pro-imperialist coup in Caracas.

A report on the elections published by Telesur on June 25 welcomed the initiative by Petro. The article emphasized: “The contact held with the Venezuelan government shows the political will of president-elect of Colombia, Gustavo Petro, for opening the binational border, Tachira´s governor, Freddy Bernal, acknowledged. In statements to Union Radio, the Venezuelan western state´s highest authority said that the formal opening of the border crossings between the two countries will bring huge benefits to the economy of the region. For the last two years -he recalled- contacts have been maintained with the authorities of the Colombian department of Norte de Santander; the border remained closed ‘only and exclusively’ by instructions of the outgoing president, Ivan Duque, Bernal said.”

Nonetheless, in a separate article also published by Telesur, seeks to draw a distinction between the South American governments which came to power during the late 20th and early 21st century, and the current wave of administrations. In Venezuela, since the time of the late President Hugo Chavez, the objective of government policy under the United Socialist Party has been non-capitalist development. President Nicolas Maduro has been unwavering in the government’s solidarity with Cuba and other socialist and anti-imperialist states.

Since February 24, when the Russian special military operation began in Ukraine, Venezuela, although having been approached by the U.S. State Department, has expressed its solidarity with Moscow and emphasized the need for a diplomatic solution to the war. Venezuela understands clearly that the expansion of NATO membership and military bases would be an existential threat to all peace and freedom-loving peoples throughout the world.

In a news analysis commentary published on June 24, Telesur notes: “However, some characteristics of the new progressive wave differ to a certain extent from the first one. Whereas all the progressive governments have as their main concern the social problems and the well-being of the lower social classes, who have been impoverished and marginalized by the liberal policies historically applied in Latin America, the political narrative and ideological orientation are divergent when comparing both waves. The new wave of progressivism aims to change the society but not the system, as the intention to impart justice and redistribute wealth is carried out within the rules of capitalism. Thus, the aspiration to transform Latin America under the model of the ‘Socialism of the 21st Century’ has been lately forgotten.

Without mincing my words, it seems socialism as a feasible society in the narrative of the progressive leaders died with Hugo Chavez and is no longer a benchmark for the current wave of governments. All in all, only time will tell which of the two waves obtain greater results regarding the implementation of people’s rights.”

However, the intervention of the masses as in Ecuador, Chile, Argentina and other states could portend much for a sharper turn to the Left in regard to socialist-orientation and anti-imperialism. What is clear is that Washington cannot provide an alternative to the leftward political trajectory in South America and the Central America-Caribbean region. The social contradictions prevalent in the U.S. have exposed the inconsistent foreign and domestic policies of Washington and Wall Street. The question is whether the rise in inflation and repressive state measures will spark discontent in the U.S. aimed at addressing the central concerns of workers and oppressed peoples.