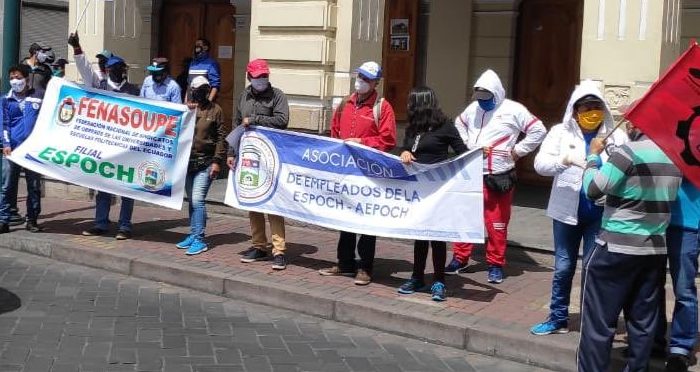 Above photo: Ecuador protests against neoliberal measures during pandemic from Twitter.

Protesters state that Lenin Moreno’s government has made decisions that only benefit big companies and private banks.

Unions, students, teachers, workers, and social organizations took to the streets in Quito as others followed from home in several cities Monday with a pot-banging protest.

In Quito, Cuenca, and Guayaquil the protesters challenged the restrictions imposed due to the COVID-19 pandemic and took the streets to demand the withdrawal of the measures, and also to defend public education, health, and labor rights.

Central Workers’ Organization (CUT) President Richard Gomez declared the demonstrators will remain in constant mobilization until their purpose is achieved.

“Central Workers’ Organization (CUT)  fights for workers’ rights. Today we unite nationwide to demand this government to withdraw its position, that it is killing people, people who today said its enough with the measures.”

“From the moment that law was passed in the Official Registry, we came up with a whole legal strategy. We are going to present constitutional actions to try to get that law taken down; but we could not stop going out, taking risks in some way, because these are our rights,” he stated.

Translation: Since #Riobamba: The voice of protest of the people and the workers is heard.

These measures were announced a day after the Moreno administration could not get the National Assembly to approve a regulation that would have allowed it to collect “contributions” from workers to solve the fiscal deficit.

Instead of that option, the Ecuadorean government issued decrees resulting in an average reduction of 25 percent of the public employees’ salaries, massive layoffs, privatization of public sector companies, and the elimination of fuel subsidies,  the reason the October 2019 protests began.

In Quito, the demonstrators marched down the historical center,  where a police contingent prevented their advance. Due to these protests, police secured the surroundings in the seat of the government in Carondelet Palace.

The rallies occur amidst the coronavirus positive cases increase in the South American country, which reached the number of 37,355 and over 3,200 confirmed deaths.