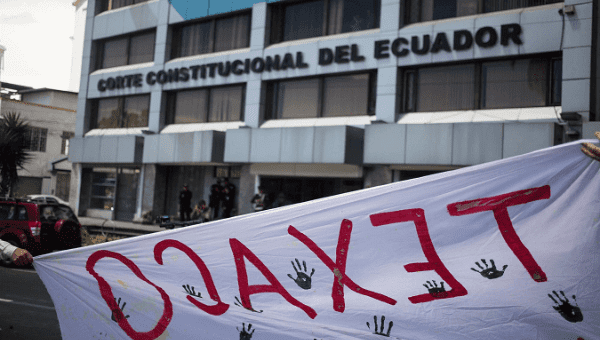 The victory for the union of affected people in Ecuador’s Amazon was accompanied by the suspension of their U.S. lawyer Steven Donziger.

Ecuador’s Constitutional Court rejected Chevron’s request to revise a national court ruling that sentenced it to pay US$9.5 billion in environmental and social reparations to the communities affected during its operations in the Ecuadorean Amazon, between 1964 and 1992.

“Historic day. After over 25 years, the Constitutional Court ruled in favor of those affected by Texaco. Congratulations to our sisters and brothers at @Chevron_Toxico. Without a doubt you are an example of dignity and perseverance. Let’s go for more! #TexacoGuilty,” the Center for Economic and Social Rights tweeted Tuesday night.

In the resolution published Tuesday, the court justified its decision arguing “there is no violation of constitutional rights.” Chevron responded saying the court’s ruling is “consistent with the pattern of denial of justice, fraud, and corruption against the firm in Ecuador.”

The court’s ruling against the oil giant represents a significant victory, especially after fears the justices were facing corporate and government pressure to rule in favor of Chevron.

“I thank the justices of the Constitutional Court. We know of the ferocious pressure they suffered… particularly in the last two months. Economic, political pressures. But they never gave up. Thank you for fulfilling your duties,” Pablo Fajardo, lawyer of the Union of the Affected by Texaco’s Oil Operations said in a press conference Wednesday.

However, the “battle doesn’t end here, we must continue battling in Canadian courts where we maintain a lawsuit to get Chevron to pay,” Fajardoexplained.

“I call on everyone to not give up until Chevron pays for what they did in the Amazon,” he added.

Chevron doesn’t have assets in Ecuador so it can’t be forced to pay the US$9.5 billion it owes the over 30,000 Indigenous and Campesino people affected.

Despite the victory on Ecuadorean soil, on the same day the Union suffered an important setback. Steven Donziger, the lawyer leading the case in international courts was suspended from practicing law in New York by a five-judge panel appeals court of the First Department in Manhattan for professional misconduct.

In a statement Donziger said “the First Department rests its decision to suspend me without a hearing was based largely on false testimony paid for by Chevron and presented by an admittedly corrupt witness coached 53 days by company lawyers prior to taking the stand. The entire case was designed to retaliate against me for my role in holding the company accountable for the deliberate dumping of billions of gallons of toxic waste in Ecuador.”

Since 2015, Donziger has been trying to enforce the Ecuadorean judgment in Argentina, Brazil, and Canada, but has lost these attempts. A Gibraltar court even ruled in favor of Chevron.

James Craig, Chevron’s communications adviser stressed the company will “continue to work through international courts to expose the individuals linked to the judicial fraud and extortion against the company.”

The plaintiffs will continue their attempts to enforce Ecuador’s ruling by presenting the case in Australia and New Zealand, where Chevron has assets. Donziger is expected to appeal his suspension.