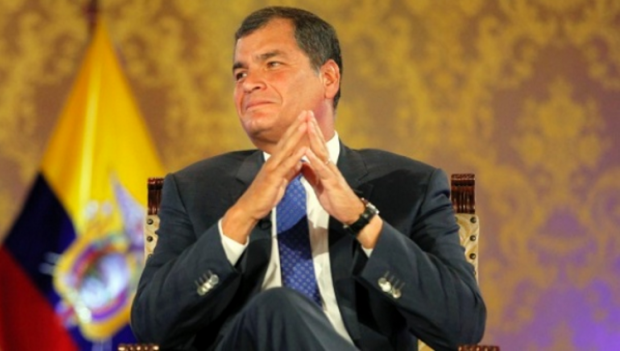 For President Correa, the success of socialism can be seen in the reduction of inequality and poverty in Ecuador.

Ecuadorean President Rafael Correa rejected the notion that the leftist and revolutionary governments in Latin America have failed and instead posited that the real failure in the region has been the neoliberal economic model.

“Inequality in a poor country means misery, generalized misery. We must seek out other forms of developing ourselves that are distinct from those fantasies of trickle-down theories,” said President Correa in an interview Sunday.

In the region, that has meant the pursuit of a development model known as “socialism of the 21st century,” which has been heavily disparaged in recent times due to the economic crisis in Venezuela.

For Correa the negative press regarding Venezuela, Bolivia, and Ecuador—all led by governments that are proponents of socialism—is partly driven by the political agenda of private media outlets, which have been historically hostile to leftist regimes.

As an example, Correa mentioned that the “ideological and propagandist (media) apparatus” ignores that the country that has experienced the most economic growth in the region is Bolivia.

Like Bolivia, one of the tenets of the Ecuadorean model of socialism has been economic growth that is redistributive in nature.

“Growth is important … but not just any kind of growth, it must be quality growth, growth that favors the poor, growth with social justice, growth with equity,” said Correa.

For the president, the successes of socialism of the 21st century can be seen in the reduction of inequality and poverty experienced in the aforementioned countries.

Ecuador, unlike its neighbors, does not have its own currency, as such it cannot devalue its currency, which is traditionally the primary instrument used to boost exports and increase income. This combined with the economic slowdown of its trading partners, chiefly China and Russia, has led to a recent contraction of the economy.

Ecuador is also an oil-exporting country and the dramatic drop in the price of oil has greatly reduced the country’s income. The country has also experienced a number of natural calamities, with the Cotopaxi volcano having shown signs of activity in 2015 and the 7.8 earthquake that struck the coastal provinces in April.

A recent report by the U.N.’s Economic Commission for Latin American and the Caribbean confirmed that South America is set to experience economic contraction this year.

Correa argues that, despite the so-called perfect storm, his country has weathered the challenges well.

He points to the economic calamity experienced by the country in 1999, when the country was under conservative rule, where millions lost their savings after the banking crisis led to the collapse of major financial institutions.

Then, like now, the country was forced to endure a number of external economic factors, such as a drop in the price of oil, that crippled the country’s finances

Correa said that, unlike previous governments, the weight of the crisis has not fallen on the poor, with the state maintaining its social investments and programs.

“Let’s compare the situation to 1999, where the external shocks were less than we’ve received in these last two years, they made the economy crash. They made the economy contract 6 to 8 percent, two million Ecuadoreans emigrated, unemployment (was) above 14 percent,” stated Correa.

The Ecuadorean president argued that the neoliberal economic model pursued by those conservative administrations are the real failures.