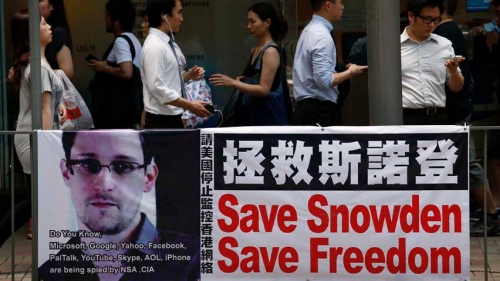 Edward Snowden Given Sam Adams Award for Integrity in Intelligence

When secrecy is misused to hide unconstitutional activities, fealty to that oath — and higher duty as citizens of conscience — dictate support for truth tellers who summon the courage to blow the whistle.  Edward Snowden’s disclosures fit the classic definition of whistle blowing.

Former senior NSA executive Thomas Drake, who won the Sam Adams award in 2011, has called what Snowden did “an amazingly brave act of civil disobedience.”  Drake knows whereof he speaks.  As a whistleblower he reported waste, fraud, and abuse — as well as serious violations of the Fourth Amendment — through official channels and, subsequently, to a reporter.  He wound up indicted under the Espionage Act.

After a lengthy, grueling pre-trial proceeding, he was exonerated of all ten felony charges and pleaded out to the misdemeanor of “exceeding authorized use of a government computer.”  The presiding judge branded the four years of prosecutorial conduct against Drake “unconscionable.”

The invective hurled at Snowden by the corporate and government influenced media reflects understandable embarrassment that he would dare expose the collusion of all three branches of government in perpetrating and then covering up their abuse of the Constitution.  This same collusion has thwarted all attempts to pass laws that would protect genuine truth tellers like Snowden who see and wish to stop unconstitutional activities.

“These are the times that try men’s souls,” warned Thomas Paine in 1776, adding that “The summer soldier and the sunshine patriot will, in this crisis, shrink from the service of their country; but he that stands it now deserves the love and thanks of man and woman.

It is in this spirit that Sam Adams Associates for Integrity in Intelligence are proud to confer on Edward Snowden the Sam Adams Award for 2013.