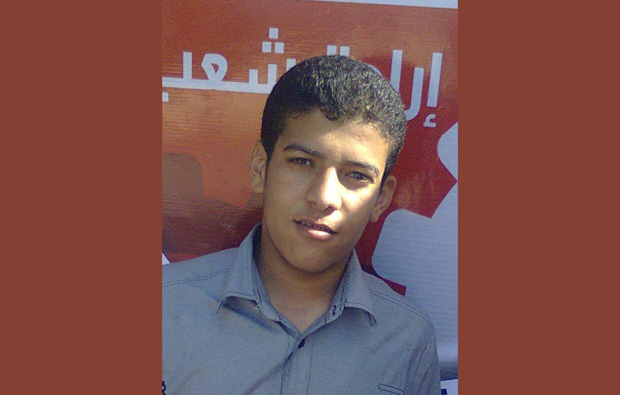 Photo: Sayyaf Jamal, the youngest person in the case of the execution today. He’s a medical student and he was sentenced to death today. They have faces and they have names.

The Egyptian court has just handed down one of the most grotesque sentences in Egyptian history, condemning 529 people to death in one fell swoop.  The US State Department said it was “shocked” and that the verdict defies logic. “While appeals are possible, it simply does not seem possible that a fair review of evidence and testimony consistent with international standards could be accomplished with over 529 defendants after a two-day trial,” a State Department official said. Amnesty International issued a condemnation, and CODEPINK has launched a campaign to pressure the Egyptian government to overturn the verdict and respect political dissent.

The court sentenced supporters of ousted President Mohamed Morsi for their alleged role in the murder of a single police officer in the southern city of Minya last August. In addition to the murder, the 529 defendants were accused of attempting to kill two other police officers and attacking a police station. The incident occurred after the military overthrew President Morsi in July 2013 and violently broke up two pro-Morsi encampments in Cairo, leaving nearly 1,000 people dead and arresting some 16,000 people, including most of the Muslim Brotherhood leadership.

The court held two sessions. In the first session, the judge angrily shouted down requests by defense lawyers for more time to review the prosecution’s case. In the second session, the judge barred defense lawyers from even entering the courtroom. “We didn’t have the chance to say a word or to look at more than 3,000 pages of investigation to see what evidence they are talking about,” attorney Khaled el-Koumi told The Associated Press.

A senior official involved in courtroom security, speaking on condition of anonymity, said that 154 defendants were in the courtroom in a cage, and upon hearing the verdict, screamed at the judge “You butcher!” The rest of the defendants were tried in absentia.

The group is among some 1,200 Muslim Brotherhood supporters on trial; a second group of 683 Morsi supporters is due to go on trial on March 25, including the leader of the group, Mohamed Badie, and the head of its political wing, Saad al-Katatny.

Since the overthrow of Morsi, Egypt has been wracked by militant bombings, suicide attacks and other assaults targeting police and military forces. The authorities have blamed the Brotherhood for the violence, branding it a terrorist organization, confiscating its assets and exposing its members and supporters to harsh sentences under anti-terrorism laws. But al-Qaeda-inspired group Ansar Beyt al-Maqdis has taken credit for many of the attacks. The Brotherhood has denied any links and has denounced the violence, and the regime has not produced any evidence linking the Brotherhood to the attacks.

Death sentences of this magnitude in a single case makes Egypt surpass most other countries’ use of capital punishment in a year. “This is the largest single batch of simultaneous death sentences we’ve seen in recent years, not just in Egypt but anywhere in the world,” said Hassiba Hadj Sahraoui, Deputy Middle East and North Africa Program Director at Amnesty International.

Human rights lawyers say the verdicts are subject to appeal and are likely be overturned. But many worry that the verdict, which has angered millions of Morsi supporters, will compel some Brotherhood members to take up violence, a move that will justify an even heavier crackdown.

Another indication of the political nature of Egypt’s courts is the fact that they have ignored gross human rights violations by the security forces. Just one police officer is facing a prison sentence, for the deaths of 37 detainees. No one else is being held responsible for the deaths of hundreds of peaceful protesters or the torture of prisoners. At least 16,000 political dissidents have been arrested since the overthrow of Morsi and many of those imprisoned have been tortured by the authorities.

CODEPINK has launched a campaign for human rights in Egypt, including protests at the Egyptian Embassy in Washington DC, and petitions targeting the Egyptian government and the US State Department.