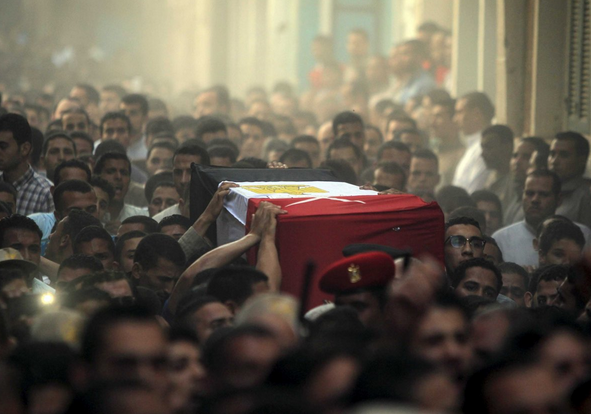 Egypt Will Be Worse Than Pre-2011 With New Terrorism Law

REUTERS/Mohamed Abd El Ghany. Relatives of 21-year-old Mohamed Adel, one of the army officers who died in yesterday’s Sinai attacks, carry his coffin during the funeral in Al-Kaliobeya, near Cairo, Egypt, July 2, 2015.

CAIRO (AP) — After a series of stunning militant attacks, Egypt’s government is pushing through a controversial new anti-terrorism draft bill that would set up special terrorism courts, shorten the appeals process, give police greater powers of arrest and imprison journalists who report information on attacks that differs from the official government line.

The draft raised concerns that officials are taking advantage of heightened public shock at last week’s audacious attacks to effectively enshrine into law the notorious special emergency laws which were in place for decades until they were lifted following the 2011 ouster of autocrat Hosni Mubarak. Rather than reviewing security policies since the attacks, officials have largely been focusing blame on the media for allegedly demoralizing troops and on the slowness of the courts.

The 55-article bill has not been officially made public but was leaked to the Egyptian press over the weekend. A judicial official who vetted the draft confirmed its contents to The Associated Press on Monday. The bill is currently in a review process, leaving it unclear when it will be issued or whether changes could be made. Since Egypt has not had a parliament for more than two years, laws are issued by the president, Abdel-Fattah el-Sissi, after going through the Cabinet. In the absence of parliament, any debate is largely through media or behind closed doors.

The leaked copy of the bill brought an outcry and demands for changes in the draft from Egypt’s journalists union and from senior judges. “The disaster is that now they have decided to punish those who are carrying the news and not those responsible for the catastrophes,” Khaled Balshi, of the Press Syndicate, told the AP. The government “seeks a press that fits it, a la North Korea.”

The New York-based Committee to Protect Journalists has said that at least 18 journalists were behind bars in Egypt as of June 1 and accused the government of using the pretext of national security to crackdown on freedoms. Four more journalists were arrested last week, the group said.

“Imposing jail time for publishing news about any topic, including government’s account of public events, contradicts Egypt’s own constitution and defies any standard of free press. Journalists’ basic function in any democratic society is to vet government behavior and Egypt is not an exception,” Sherif Mansour of CPJ wrote to AP in an email. The bill “pushes further the government ability to, and its practice of, crushing critical and independent voices inside the country.”

Still, the draft law was hailed by Egypt’s political parties and other public figures as a much-needed tool to combat violence that has been rising since the military ousted Islamist President Mohammed Morsi two years ago.

The Cabinet approved the draft Wednesday. That was two days after a car bomb in an upscale Cairo neighborhood killed the top public prosecutor Hisham Barakat. That same Wednesday, Islamic militants launched a multi-pronged attack attempting to seize a northern Sinai town, hitting the military with suicide attacks and battling soldiers for hours.

In the next required step, the State Council — a judicial body that must vet bills and advises the government on legal issues — reviewed the draft and made a few changes most at the request of the government, said the judicial official, who is a member of the council. Those amendments toughened some provisions, including introducing a prison sentence for anyone who records or broadcasts any court proceedings in a terrorism case without court permission. The official asked for anonymity because he was not authorized to talk to the press.

Ibraheem Abu Mustafa/REUTERS. Smoke rises in Egypt’s North Sinai as seen from the border of southern Gaza Strip with Egypt July 1, 2015. Islamic State militants launched a wide-scale coordinated assault on several military checkpoints in Egypt’s North Sinai on Wednesday in which 50 people were killed, security sources said, the largest attack yet in the insurgency-hit province.

The Cabinet will now consider whether to make any changes sought by representatives of the judiciary, whose opinions are non-binding.

At Barakat’s funeral, a visibly angry el-Sissi shouted that courts must act faster. “We have left it all to you, to justice. We have left with you, for two years,” he shouted. “Please, please, we want prompt courts and prompt and fair laws … The trials and the laws won’t work in this manner and under these circumstances. This may work with regular people, but not these people. Only prompt laws will work.”

His anger was matched by TV reporters calling for the quick implementation of death sentences issued against Islamists, including Morsi.

The government also aggressively pushed back against foreign media, which officials and the pro-state media accused of exaggerating the degree of the Sinai attacks. The military spokesman warned against using foreign media reports. The Foreign Ministry in a briefing urged foreign reporters to avoid using terms like “Islamists” or “jihadis” and suggested in a paper distributed to reporters that they instead use terms like “terrorists,” ”savages,” and “eradicators.”

The draft bill states that “anyone who intends to publish news or statements about terrorist attacks in way that differs from official statements issued by concerned authorities is punishable by imprisonment of no less than two years.” An earlier version stipulated the news must be untrue to be punished, but the word “untrue” was dropped, the judicial official said.

The bill would create special courts to hear terrorism cases. It would also eliminate one of the two layers of appeal that are currently allowed in criminal cases, and it would shorten the deadlines for filing appeals to 40 days from 60.

AP. In this May 8, 2014 file photo, Egypt’s ousted Islamist President Mohammed Morsi sits in a defendant cage in the Police Academy courthouse in Cairo, Egypt.

It would also create a new category of detention — “restraining” — meaning police can detain someone solely on the basis of suspicion without evidence of a crime for a 7-day-period, which prosecutors can renew an unlimited number of times. The draft also grants the president the right to declare curfews and evacuate residents from an area for a period of six months, with the approval of the Cabinet. It says law enforcers cannot be questioned over use of force if it is to protect themselves from imminent danger and is proportional.

A rights activist who specializes in legal reforms, Mohammed Zaree, said the vague terms in that provision would ensure police impunity for abuses.

“To say that we have legal vacuum is to mislead the public. Egypt doesn’t need new laws,” Zaree said. “To increasingly depend on exceptional laws has been the main reason for decreased efficiency in security agencies.”

Egypt’s Supreme Judicial Council, made up of the 13 top judges, expressed to the government its opposition to creating special terrorism courts and to reducing the time for appeal.

Speaking to the AP, one judge who is not on the council but is high ranking in the judiciary, said the creation of special courts denies the defendants their right to a natural judge. He called the bill “half-cooked,” saying it was clumsily written. He agreed to express his concerns to the AP on condition his name not be used because judges traditionally refrain from talking to the press.

He also bristled at the implication that rising terrorism was linked to delays in court proceedings. “As if the judiciary is to blame. This is not the causal relation,” he said. “Do they want to get to the truth or to take revenge from a suspect?”