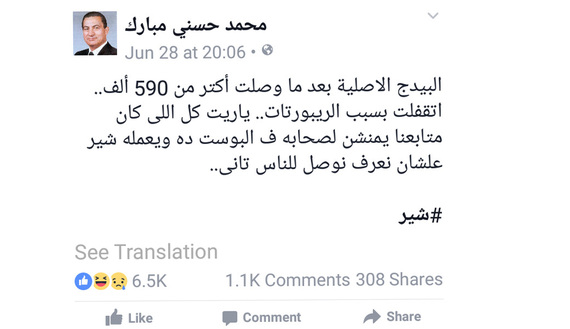 Above Photo: A screenshot from earlier this summer shows a clone of the Mubarak satire page that was shut down “after it reached more than 590,000 followers.” The clone page was later shuttered as well. (photo by Screenshot made by Sayed Elhadidi)

Note: The regime of President Abdel Fattah al-Sisi is behaving like they are very insecure. They cannot even take a joke.

After the Egyptian officials clamped down on satirical programs in Egypt, notably “Al-Bernameg,” which had been hosted by media presenter Bassem Youssef, Egyptian satirists have resorted to social media as a supposedly safe haven where they can pursue their favorite hobby — taunting heads of state, especially President Abdel Fattah al-Sisi.

The Egyptian satirists’ idea was to create pages on various social media platforms that carry the name of the political character whom they make fun of. Therefore, they created pages that held the names of Sisi and former President Hosni Mubarak, in addition to the latter’s wife, Suzanne Mubarak, and his son, Gamal.

Sources have told Al-Monitor that many of these pages are administered by a young man who is 16 years old.

The administrator of the satire page usually ridicules the politician by publishing posts on the latter’s virtual daily life.

On June 21, an Egyptian administrative court ruled that Tiran and Sanafir — two islands that the Egyptian government ceded to Saudi Arabia during the visit of King Salman bin Abdul-Aziz Al Saud to Egypt in April — are Egyptian. Thereafter, the satirical Facebook page that held the name of Sisi posted a purported photo of Sisi’s cellphone showing 12 missed calls from Salman demonstrating the king’s anger over the ruling of the Egyptian court.

However, Egyptians’ satire against Sisi and other politicians did not last long, as the page — which had more than 800,000 followers — was shut down after its existence was reported by a large number of users.

The Sisi satirical page was shut down a few days after the satirical page on Mubarak was closed as well. However, the administrator of the Mubarak satire page created a new page with the same name, indicating June 28 that “the original page was shut down because of the reports against it, after it reached more than 590,000 followers.” The new page has since been closed as well.

Although a new satire page was created for Sisi and gained more than 99,000 followers, the administrator of the page said Aug. 6 that the page was at risk of being shut down because of reports against it.

Sisi has indicated that it is possible for online accounts to be created in order to shut down the pages taunting him. “With the assistance of two web brigades, I can shut down the [opposing] pages, take them over and make them my own,” Sisi said.

Sisi commented on this issue during his meeting with Egyptian community representatives at Al-Ittihadiya Palace on April 16 that was held to discuss the Egyptian-Saudi border demarcation agreement that handed the Red Sea islands of Tiran and Sanafir over to Saudi Arabia.

In the meeting, Sisi warned against what he called fourth- and fifth-generation warfare involving the internet, saying “plots are being made [against Egypt].”

Sisi expressed disdain at what he described as “questioning of everything.” He said, “Religious and community leaders should work together to recover trust among Egyptians. Why are people living in such a state of distrust?”

Egyptian actor Khalid Abu al-Naga criticized the web brigades on Twitter on May 15, saying, “Most of the insolence and insults come from Sisi’s online supporters who leave their consciences behind. The circle is closed and people are fed up.”

Egyptian satirist Muhammad Zughbi said he does not believe the satirical social media pages were shut down because of the “web brigades,” indicating that Sisi has a large number of supporters who can pressure and block the pages without receiving any direction from the regime.

Zughbi told Al-Monitor by phone that he opposes any kind of satire that contains personal insult, indicating that some of the satirical pages cross the line at some point; still, he is against shutting them down.

Creating fake accounts on the internet for the purpose of shutting down opposing pages or disseminating certain ideas in favor of the regime is not new to the Egyptian political arena. For instance, the Muslim Brotherhood previously used “web brigades” to support Egyptian President Mohammed Morsi before he was ousted in July 2013.

On March 31, 2013, the privately owned Egyptian daily Al-Watan published a report revealing the names of the Brotherhood’s “web brigades” administrators. Al-Watan quoted Abd al-Jalil al-Sharnubi, a former editor-in-chief of the Brotherhood’s website who had previously worked with Khairat al-Shater, deputy supreme guide of the Muslim Brotherhood, as saying, “Shater ran the web brigades as if they were isolated islands,” indicating that these brigades had an “open budget and aimed to spread rumors against [the Brotherhood’s] opponents.”

Online marketing analyst Ibrahim Hazem told Al-Monitor that Facebook cannot shut down a page for merely mocking a head of state. “As long as there is no sexual or racist content, the Facebook management does not have the right to shut down any political satire page,” Hazem said.

Hazem noted that he does not rule out the possibility that Sisi’s official page filed a complaint to Facebook against the sarcastic page, since they both had the same name. A Facebook web developer, who preferred not to be named, said there could be truth in Hazem’s assumption that Sisi’s official page might have reported the other page that held the same name and therefore it was shut down.

The web developer told Al-Monitor, “If the page did not openly indicate that it is unofficial, then the administrator of the official page has the right to ask for its closure on the basis of impersonating a public figure.”

But the developer ruled out the possibility that Facebook management closed the page for merely posting content opposing the regime, saying, “Even if the number of reports against an opposing page have increased, those who are responsible for dealing with such reports carry out their own investigations and will not close any page unless it contains violent, terrorist, nude or racy content.”