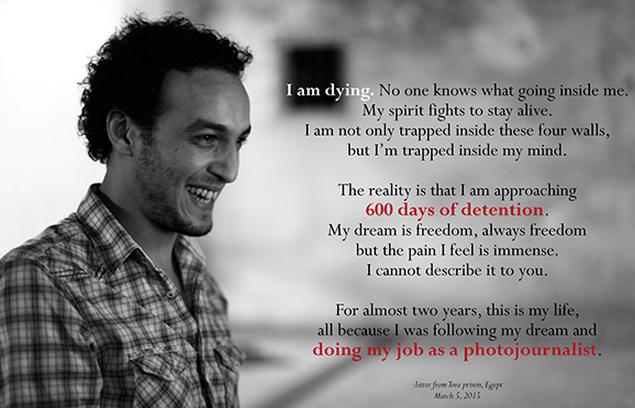 Egyptian Journalist Shawkan On His 600 Days In Prison

“Photography is not just a hobby for me. It is an actual way of life. It’s not just how you hold a camera and snap a picture. It’s the way that you see life and everything around you.”

So reads a letter written by Mahmoud Abou Zeid, an Egyptian freelance photojournalist also known as “Shawkan,” to mark his 600th day behind bars. In the letter, which was published on Monday, Shawkan describes the physical and psychological toll that prison has taken on him, but maintains that he simply wants to be free to practice photojournalism: “My passion is photography, but I am paying the price for my passion with my life. Without it, a part of me is missing.”

Other parts of the letter are even more chilling: “Tora prison is like a cemetery. It is a place where dreams come to die.”

Shawkan was arrested on August 14, 2013, while he was covering clashes between Egyptian security forces and supporters of ousted President Mohamed Morsi in Cairo. He has not been charged with a crime, and his detention has been renewed every 45 days.

In 2014, Egypt tied with Syria as the sixth worst jailer of journalists in the world, according to CPJ research. On November 6, CPJ and See Media released a documentary film, “Under Threat,” that highlights the perils of working for the Egyptian media. The film features Shawkan and his family.