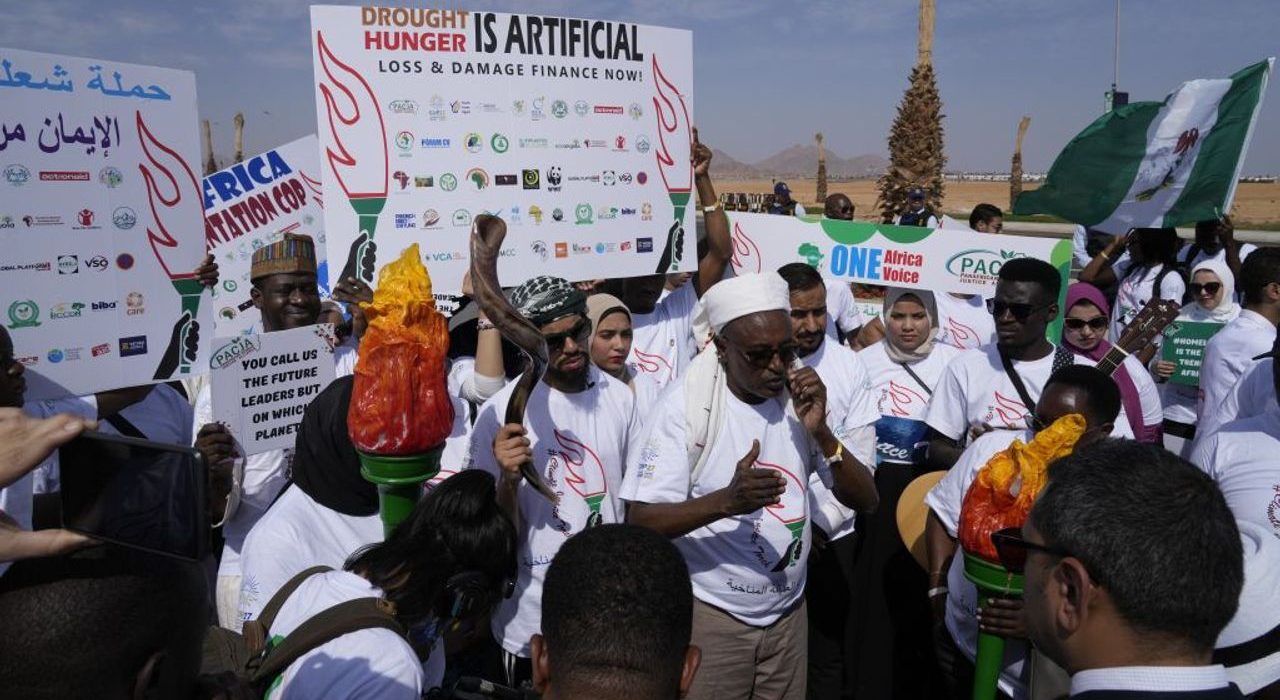 Above photo: Demonstrators call for climate action on the African continent prior to the COP27 U.N. Climate Summit, Friday, November 4, 2022, which start on Nov. 6, and is scheduled to end on November 18, in Sharm el-Sheikh, Egypt. AP Photo/Peter Dejong.

Cop27 is to be held in the resort town of Sharm el-Sheikh in Egypt’s Sinai desert between November 6 and 18, far away from the noxious fumes and densely packed squalor of Cairo, Egypt’s capital, that is home to around 20 million largely impoverished Egyptians.

Some 90 heads of state and leaders of 190 countries, including US President Joe Biden—the first visit to Egypt of any US president since 2009—French President Emmanuel Macron, German Chancellor Olaf Scholz, UK Prime Minister Rishi Sunak and Indian Prime Minister Narendra Modi, are slated to attend.

Egypt’s brutal dictator, General Abdel Fattah el-Sisi, has organized a massive security operation to prevent demonstrators and protesters coming to Sharm el-Sheikh. The security forces have detained hundreds of people across the country, including environmental activists, for supposedly belonging to a terrorist group. This comes as calls have grown on social media for Egyptians to protest at Sharm el-Sheikh over the country’s deepening economic crisis on Friday, November 11, calling it the “Climate Revolution.”

Draconian security measures have transformed the resort into a “war zone” to “protect the event” in what UN human rights experts described as “a climate of fear for Egyptian civil society organizations to engage visibly at the Cop27.” Insofar as any demonstrations are permitted, they are likely to be confined to areas tucked away in the desert far away from the world leaders and their plush hotels.

These events alone expose the human rights propaganda and empty climate policy bromides espoused by the leaders of the imperialist powers that uphold the interests of the chief despoilers of the planet: the corporate and financial kleptocracy.

El-Sisi has seized the opportunity to bolster his international standing and promote Egypt’s position at the heart of gas geo-politics in the eastern Mediterranean, amid the US/NATO-led war against Russia that has reduced Russian energy supplies to Europe. Having seized power in a military coup with Western backing in 2013, overthrowing the elected president, the Muslim Brotherhood-affiliated Mohamed Mursi, el-Sisi heads a tyrannical regime that outlaws peaceful assembly and free speech. His suppression of all dissent is aimed at defending Egyptian and foreign capital against a social explosion of the working class who face mass poverty, social inequality and a military that controls at least 40 percent of Egypt’s economy.

Beginning with a bloodbath that killed more 1,000 people, his security forces have since then gunned down hundreds more. Others have been executed after kangaroo court trials and frame-ups. Egypt’s prisons, synonymous with torture and disappearances, are overflowing with more than 60,000 political prisoners, including some of the country’s most prominent politicians. Many are held without trial or charge. All strikes, protests and demonstrations are banned under Egypt’s draconian State of Emergency laws. The heavily censored media are mouthpieces for the state, while parties and organizations that criticize the regime are outlawed.

Although el-Sisi released a handful of detainees in the run up to Cop27, this is far outweighed by the number of new arrests. He has ignored the calls of some 200 organisations and individuals, including 13 Nobel literature laureates, to release journalists and political prisoners ahead of the conference, including activists Alaa Abdel Fattah and Ahmed Douma, human rights lawyer Mohamed el Baqer, blogger Mohamed “Oxygen” Ibrahim, former presidential candidate Abdel Moneim Aboul Fotouh, Seif and Safwan Thabet, and environmentalist Ahmed Amasha.

The well-known blogger and political activist, Alaa Abdel Fattah, who holds dual British and Egyptian citizenship and was an early opponent of the Mubarak dictatorship, has spent much of the time since 2011 in jail on charges of inciting violence against the military and opposing laws banning protests. On Tuesday, he announced he would escalate the partial hunger strike he began in April and refuse all food or drink.

None of this prevents the world’s leaders attending Cop27 on Egyptian soil or giving el-Sisi a platform even as they cite the looming energy shortage—the product of their own actions against Russia—to bring in coal-fired power plants and increase gas and oil exploration to make good the shortfall.

The conference takes place as Egypt faces an increasingly desperate economic and financial crisis, exacerbated by the COVID-19 pandemic that officially killed just 25,000 people (likely a huge underestimate in a country where only 39 percent of the 104 million people have been fully vaccinated). Remittances from Egyptians working in the Gulf fell and workers returned, swelling the ranks of the unemployed. Revenues plummeted while expenditure on health, social welfare and support for tourism and the industrial sector rose.

The war in Ukraine has hit Egypt hard, since it is the world’s largest importer of wheat, with around 80 percent of its supplies coming from Russia and Ukraine. Egypt’s tourism industry is heavily dependent on Russian and Ukrainian visitors and accounts for 12 percent of GDP, while higher interest rates in the US and the dollar’s surging value have compounded Egypt’s debt crisis and led to an outflow of foreign funding.

The Egyptian pound has fallen from 16 per US dollar to 23 after Egypt’s central bank announced it would abandon the pound’s peg to the dollar and allow it to float in accordance with market forces in return for a $3 billion loan from the International Monetary Fund (IMF), the fourth since 2016, making Egypt the second largest borrower after Argentina.

This borrowing is a drop in the ocean, with Goldman Sachs saying earlier this year that Cairo would need $15 billion from the IMF over the next three years to plug a financing gap of $40 billion to fund El-Sisi’s vanity projects. These include a $59 billion new administrative capital 28 miles out in the desert east of Cairo, a $25 billion nuclear reactor and an $8 billion expansion of the Suez Canal that has failed to bring in the vastly inflated, projected income. His massive arms purchases—largely from the US despite the Biden administration’s suspension of a few weapons deals in mock horror over his appalling human rights record—enable him to repress the masses not only in Egypt but throughout the region have also added to the deficit.

Saudi Arabia, the United Arab Emirates (UAE) and Qatar have pledged about $22 billion in investments, buying up some of the country’s most profitable state-owned assets and companies at knock-down prices in a bid to stabilise the most populous country in the Arab world. This has drawn Cairo into Washington’s anti-Iran alliance, with el-Sisi attending the Jeddah meeting with Biden and leaders from the Gulf States, Jordan and Iraq in July.

Cairo has played a key role in maintaining Israel’s criminal 15-year long blockade of the Gaza Strip—ruled by the Muslim Brotherhood-affiliated group Hamas, preventing any reconstruction after it has been rendered almost uninhabitable by Israel’s repeated assaults, and brokering a ceasefire between Palestinian Islamic Jihad and Israel on Tel Aviv’s terms in August.

This has served to accelerate the government’s transfer of wealth from lower and middle classes to itself and the business elite, with devastating consequences for Egyptian workers and their families. Inflation is now running at 15 percent, although the prices of some foodstuffs have risen by 66 percent—ruining much of Egypt’s middle class and leading to soaring poverty rates. Some 30 percent of the population live below the poverty line, another 30 percent are close to poverty and nearly 70 percent depend on food rations.

The attendance by nearly all the major powers at Cop27 should constitute a warning to the international working class. The ruling elites’ embrace of el-Sisi signifies that they have no disagreements with his brutal methods. They will have no hesitation in taking a leaf out of his book when it comes to suppressing mass resistance to their own hated policies of war, profit-gouging, social austerity and profits before lives pandemic policy.