Elders Demonstrate Against Mine In Rocking Chairs

SALT LAKE CITY – Tuesday morning, September 26, organizers from Elders Rising called for land restoration and inter-generational justice at the PR Spring tar sands mine in eastern Utah. While sitting in rocking chairs outside the mine, seniors sang songs and held banners to bring attention to US Oil Sands’ destruction of nearly a hundred acres in the Book Cliffs, endangerment of the Colorado River Basin, and contribution to climate chaos.

“As a mother and grandmother, I am here to look straight at the destruction of our land in Utah in the pursuit of boom and bust profit from mining tar sands, the dirtiest fuel on this planet,” said Joan Gregory, a member of Elders Rising. “It is time for grandparents and great-grandparents to do everything to stop the genocide of our children and future generations.”

Producing and processing tar sands results in significantly higher greenhouse gas emissions than conventional oil and requires huge quantities of water. Utah, the nation’s second-most arid state, struggles to meet the water demands of a growing population and climate projections show the region will face an even drier future.

The PR Spring tar sands mine sits on land owned by Utah’s State Institutional Trust Lands Administration and could be the first commercial-scale tar sands mine in the U.S. However, U.S. Oil Sands, the Canadian-based company that owns the lease to mine at PR Spring, has failed to prove the mine’s economic viability and recently went into receivership.

“Why are we still investing in an absolutely unsustainable development? Utah paid $86.5 million to build a road to facilitate the extraction. We need these resources to build a renewable energy infrastructure,” said Vaughn Lovejoy, an organizer with Elders Rising. 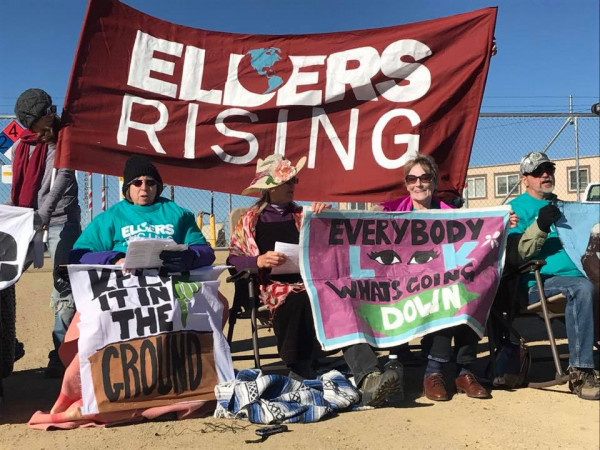 “USOS came up with an unproven scheme to extract the last drops of oil from the rocks beneath a beautiful ridge previously populated with elk, bear, bison, and turkey. They have yet to produce any commercially viable oil. The ugly scar they created as they scraped and hauled away the land is visible from miles around. We will continue to act and demand justice from SITLA until the land is restored,” said Kathy Albury, member of Elders Rising.

The elders expressed sadness for the mess left for future generations and all life. Jill Merritt, another member of Elders Rising, said, “I’m sad for the people—my family and the worldwide community of humans—virtually certain to experience horror, suffering, and injustice. But I’m also sad for the four-billion-year history of plant and animal evolution.”

Millennials from Canyon Country Rising Tide and Wasatch Rising Tide supported the elders. Brooke Larsen, a twenty-five-year-old organizer from Salt Lake City, said, “We must act across generations to learn from past struggles for justice and protect young people’s future.”

Gary Mesker, an organizer with Elders Rising, shared what inspires him to act: “In 1972 the lyrics to Jackson Browne’s Rock Me On the Water got down inside me and have inspired me ever since: ‘Oh people, look around you / The signs are everywhere / You’ve left it for somebody other than you / To be the one to care.’  Real caring requires action. Let us not hesitate to act.”

Elders Rising calls on the older generation to defend a livable future for their children, grandchildren, and future generations. We believe the State of Utah and the Federal Government must respond to the crisis of climate change. We act for intergenerational justice and for the countless species that make a livable world.