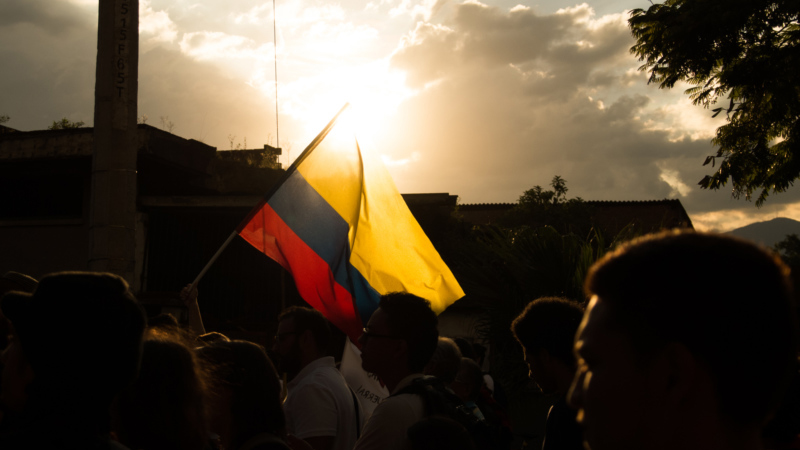 Elections In Colombia: Prospects For Change And Lack Of Guarantees

Above Photo: The fact that best explains the electoral panorama in Colombia is the national strike of 2021, accompanied by a series of massive protests in rural areas and in some of the main cities of the country, in rejection of the tax reform bill. Leon Hernandez on Flickr.

With legislative and presidential elections coming up in Colombia, the supposedly “oldest democracy in Latin America” will see if it can consolidate the most precarious and recent peace on the continent.

The Latin American and Caribbean electoral calendar for 2022 promises to be no less hectic than that of the previous year. Among the upcoming elections and referendums that are slated for this year—Costa Rica, Mexico, Chile, Peru, perhaps Haiti—two contests that are expected to attract the most attention, due to the specific geopolitical weight of these respective countries, are the general elections in Brazil, which are supposed to take place in October, and the Colombian parliamentary and presidential elections, slated for the first half of 2022.

After 20 years of governments that have supported the Uribism movement—named after Álvaro Uribe Vélez, who was president of Colombia from 2002 to 2010—and with the eternal backdrop of the armed conflict, Colombia is not only playing for change but also for the future of an unfinished peace process.

What Will The Electoral Process In Colombia Look Like?

The electoral agenda in Colombia will begin with the parliamentary election on March 13, in which citizens will have to elect a total of 108 senators and 188 members of the House of Representatives. In the Senate, 100 seats will be chosen by national constituency; two by the special constituency for Indigenous peoples; one will go to the presidential candidate who gets the second-highest number of votes—the so-called “opposition statute”; and five will automatically correspond to the political representation of the Comunes party—which was created in 2017 by members of the former FARC party (Common Alternative Revolutionary Force) following the 2016 Havana peace accords.

As for the House of Representatives, 161 seats will be elected by territorial constituencies in the 32 departments of the country and in Bogota, the capital district. One seat will go to the vice presidential candidate who receives the second-most votes under the opposition statute; two will go to Afro-Colombian peoples; one will be for the Raizal community of the archipelago of San Andrés, Providencia and Santa Catalina; one will go to Colombians living abroad—estimated to be around 4.7 million people according to the 2012 figures provided by Colombia’s Foreign Ministry; one seat will be for Indigenous peoples; five seats will again be for the Comunes party; and 16 seats will be for the special constituency for peace, by which 167 rural municipalities will participate to elect candidates who will represent the 9 million victims of the internal armed conflict officially recognized by the state.

In addition, coinciding with the parliamentary election on March 13, the various parties in Colombia will also elect the presidential candidates during the internal consultations of the coalitions that will go to the polls, in a scheme that seems to increasingly blur the traditional liberal-conservative bipartisan scheme present throughout Colombian history. Elections for the positions of president and vice president, both of whom will hold office until 2026, will take place on May 29. If no ticket wins more than 50 percent of the votes, there will be a second round of voting on June 19.

The Crisis Of Uribism And The Favoritism Of The Historic Pact

In Parliament, the ruling Democratic Center, which is the party formed by former Colombian President Álvaro Uribe Vélez, could lose its present first minority in the Senate, with 19 seats, and second minority in the House, with 32, due to the high disapproval ratings for President Iván Duque (whose disapproval ratings reached 75 percent, according to an Invamer survey of September 2021) and for his mentor Uribe (who had a disapproval rating of 68 percent). The latter is accused of being responsible for a notorious case of witness tampering that led to a judge placing him under house arrest for two months in August 2020. And he has also been associated with the “alleged electoral corruption” scandal also called “ñeñepolítica,” according to which the renowned drug trafficker José “Ñeñe” Guillermo Hernández had contributed drug money for the purchase of votes in the 2018 presidential election in Colombia, as was revealed by journalists Julián Martínez and Gonzalo Guillén of La Nueva Prensa.

But the fact that best explains the electoral panorama in Colombia, which was unthinkable just a couple of years ago, is the national strike of 2021, accompanied by a series of massive protests in rural areas and in some of the main cities of the country, such as Bogotá and Cali, in rejection of the tax reform bill presented by Duque. The escalation of repression by the Armed Forces, the ESMAD (Colombia’s Anti-Disturbance Mobile Squadron) and even the deployment of paramilitary groups in several departmental capitals contributed to the crisis and provided visibility to these protests at the international level.

According to the nonprofit organization Temblores—which “[documented] practices of police violence” during the national strike in Colombia—between April 28 and June 26, 2021, there were 44 homicides allegedly at the hands of the security forces (another 29 homicides remained undetermined with regard to the exact cause of death); 1,617 victims of physical violence; 82 cases of violence resulting in eye injuries to the victims; 28 victims of sexual violence; and 2,005 arbitrary detentions against the demonstrators. Providing varying figures, Human Rights Watch, Indepaz and the Ombudsman’s Office, along with other nonprofits and agencies, also validated the numerous cases of human rights violations during the demonstrations that took place in Colombia.

In the midst of this crisis, and after a long dance of seduction and rejection with the right wing that was not associated with Uribe, the candidate chosen by the ruling party, former Minister of Finance Óscar Iván Zuluaga, stated in January 2022 that he will run alone on behalf of the Democratic Center, a move that will most likely diminish the electoral prospects of the Democratic Center.

In addition to the governing party, there will be three other coalitions that will “aim to define single candidates among different political forces” on March 13. From the left to the center-left is the Historic Pact Coalition, which brings together “presidential pre-candidates,” such as former mayor of Bogotá Gustavo Petro for the Colombia Humana and Afro-Colombian social leader Francia Márquez for the Soy Porque Somos (“I am because we are”) movement. Other “political movements” that form part of the Historic Pact Coalition are Patriotic Union—a party that has survived the “genocide for political reasons” of more than 5,000 of its militants and leaders in the 1980s; the Colombian Communist Party; the Alternative Democratic Pole; the Indigenous and Social Alternative Movement (MAIS); the People’s Congress; and the party of former Congresswoman Piedad Córdoba, Movimiento Poder Ciudadano, among others. Even figures who used to be part of Uribe’s Democratic Center party, such as Roy Barreras and Armando Benedetti, have come out in support of the Historic Pact.

Few doubts remain about the favoritism of Petro, the coalition’s main builder, who started his electoral campaign on January 14 in the locality of Bello, in the department of Antioquia—a historic bastion of Uribism—under the slogan “if Antioquia changes, Colombia changes.” Petro, a former militant of the guerrilla group known as the April 19 Movement in the 1970s and 1980s, built his political capital as a senator when he was elected in 2006 and as a denouncer of the so-called “parapolitics”—the collusion of politicians and paramilitaries during the demobilization process of the Autodefensas Unidas de Colombia (AUC)—during Uribe’s first term as president. Petro revalidated his capital later, in his tenure as mayor of Bogotá, until his removal by Attorney General Alejandro Ordóñez in 2013, in one of the region’s first lawfare cases. As a presidential candidate, Petro received promising poll numbers from Invamer: 48.4 percent of voting intention, very close to victory in the first round, and a comfortable 68.3 percent in the second round.

In second place is a centrist group, the Hope Center Coalition, which includes the Dignity Party, the Revolutionary Independent Labor Movement or MOIR, New Liberalism and Citizens’ Commitment, the party of the best-positioned candidate of the coalition, the former mayor of Medellín and former governor of Antioquia, Sergio Fajardo.

Lastly, and to the right of the political spectrum, is the Coalición Equipo por Colombia (Team for Colombia), a league of former mayors and governors of conservative orientation. The coalition consists of Creemos Colombia, the party of the former mayor of Medellín Federico Gutiérrez; País de Oportunidades, the party of Alejandro Char, the powerful politician and businessman of Syrian and Lebanese descent who was formerly the governor of Atlántico and mayor of Barranquilla, in Colombia’s Caribbean coast region; the Partido de la U, who declined the candidacy of its president Dilian Francisca Toro and will support the former mayor of Bogotá Enrique Peñalosa; and finally, with less competitive candidacies, the traditional Colombian Conservative Party and the MIRA Movement Party.

The Armed Conflict And The Absence Of Political And Electoral Guarantees

Due to the multicultural approach of the pioneering 1991 Constitution, Colombian electoral law provides for special ethnic representations, according to local considerations. In addition to the political and economic exclusion of Indigenous, Black, Afro-Colombian, Raizal and Palenquero communities, and the postponement in the inclusion of entire regions in Colombia, such as the Pacific, the Orinoco and the Colombian Amazon, there is an urgent need for the representation of victims and former combatants of a conflict that only seems to be worsening, despite the partial and formal achievement of peace five years ago under the Havana peace accords.

The worst consequences of the “decades of conflict” in Colombia have been the death of more than 600 social leaders and human rights defenders since the Havana agreements, according to the 2020 figures provided by the United Nations; the 6,402 so-called “false positives,” a state crime that involved the murder of civilians presented as guerrillas killed in combat; the continued armed activity of FARC dissidents, the National Liberation Army (ELN) and, above all, of numerous paramilitary formations such as the Gulf Clan; the more than 90 massacres committed in 2021 and 14 massacres that have been reported so far this year, according to the Institute of Development and Peace Studies (Indepaz); and, finally, the rising tensions on the Colombian-Venezuelan border, particularly in the Colombian departments of Norte de Santander and Arauca. In the latter area, the Ombudsman’s Office established that 33 people were killed and 170 families were displaced by the actions of irregular groups.

The continuity of the conflict in Colombia, and the fact that the so-called “anti-subversive” policy has historically been the main workhorse of Uribism, explain some of the uncertainty that governs the Colombian political and electoral panorama. The same happens in relation to electoral guarantees, as seen during the allegations of fraud and vote-buying in 2018. And even in relation to the personal safety of the candidates, considering the death threats that the paramilitaries of the Águilas Negras-Bloque Capital made to Petro on December 4, 2021, or to the contemporary history of a country in which, in the last century alone, seven presidential candidates have been assassinated.

It remains to be seen if arguably the “oldest democracy in Latin America” can, in the times to come, manage to consolidate the most precarious and recently achieved peace in the continent.