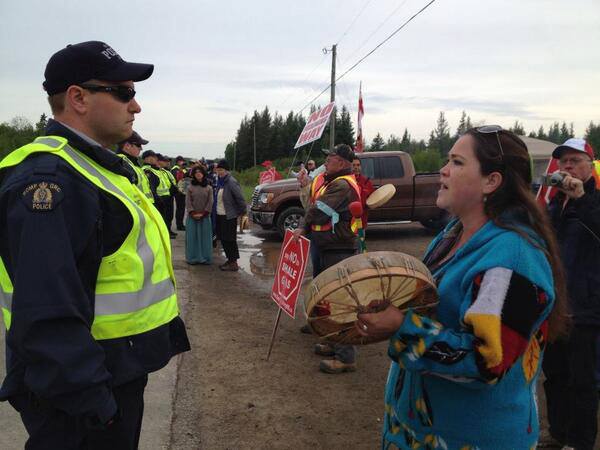 A blockade on Highway 134 near Rexton, N.B. by people opposed to shale gas exploration in the area is into its sixth day.

Demonstrators have barricaded a stretch of road and the entrance to an equipment compound used by SWN Resources Canada since Monday.

Many of the protesters are members of nearby Elsipogtog First Nation. On Tuesday, Elsipogtog Chief Aaron Sock issued an eviction notice to SWN Resources. The company ignored the notice. Instead, it went to court seeking an injunction to end the protest. It was granted Thursday by Court of Queen’s Bench Justice George Rideout.

Sock said he has convinced the RCMP not to serve the injunction until after his meeting with Premier David Alward on Sunday in Moncton. He said he and the protesters are seeking a peaceful solution to the demonstration.

Police are monitoring the protest but say despite the court order they’re in no hurry to disperse the demonstrators.

There is a large First Nations presence at the rally with people from Elsipogtog, Nova Scotia, Ontario and Quebec.

There is also a substantial police presence surrounding the blockade, with about a dozen vehicles and more than 50 officers at the scene.

Sock and some of his advisors arrived around noon to hold a meeting with protesters.

The chief has said he wants the exploration to stop. He said the work is being done on aboriginal land, a claim the New Brunswick government denies.

The protesters are concerned about the potential effect on groundwater of the hydraulic fracturing used to release shale gas. The gas is released by injecting a mixture of air, water and chemicals into the earth to break apart shale rock formations, to release the gas.